I've been looking for a simple LED fade in/fade out circuit when power is turned on/off for a 12 V LED. I have tried the following circuits but the problem is that I can't reach the full brightness of the LED that it reaches when simply connected to 12 V power supply.

Please help me with this.

(Sorry for not mentioning these points before).

2) WHAT I NEED IS - I just need a circuit at the output of which the voltage goes from 0 to 12v when power is on and from 12 to 0v when power is off. Please suggest me a new circuit if this is not possible with the one below.

Don't connect a standard LED directly to a voltage supply unless you want to risk breaking it - always use a current limiting resistor.

Back to your schematic; you are using an emitter follower to drive several series LEDs and this naturally loses about 0.7 volts between input (base) and output (emitter) and this might explain some loss of brightness. To restore the current, try lowering the resistor in series with the LED string but heed the warning about it being a current limiting resistor and don't make it so low that you damage the LEDs.

LED irradiance is a function of current, roughly speaking. LED illuminance is more like a logarithmic function of irradiance. So to achieve a roughly "linear" increase or decrease in perceived brightness, you will want the current in the LEDs to follow a rough approximation of the RC charging curve (which is exponential.) Unfortunately, just driving LEDs using an exponentially changing voltage doesn't do the trick. You may prefer to control the LED current as a function of the charging voltage.

The following circuit will achieve this to a reasonable approximation: 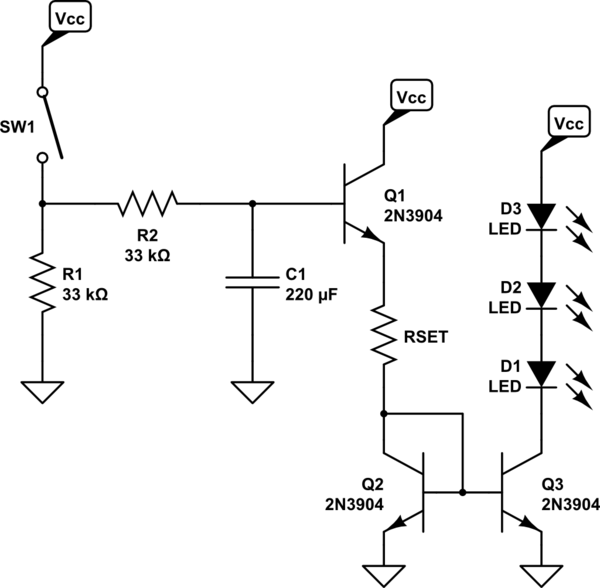 The current mirror formed from \$Q_2\$ and \$Q_3\$ will operate reasonably well down into shallow saturation for \$Q_3\$. This means you can almost achieve the entire \$V_\text{CC}\$ voltage across your LEDs, less perhaps half a volt or so. And they will control the LED current the entire time, as well.

\$Q_1\$ is working as an emitter follower. As the capacitor voltage rises, so also does the emitter -- in relatively close lock-step. This means that the voltage on \$C_1\$ sets the current in \$R_\text{SET}\$, as the collector of \$Q_2\$ will always be only about a diode drop above ground.

The only trick in all this is that \$Q_1\$ requires a base recombination current to operate. This "drags" on the rising rate of \$C_1\$'s voltage and, likewise, accelerates the falling rate. However, this circuit uses only \$R_2\$ for charging but the sum of \$R_2+R_3\$ for discharging. The larger value of \$R_2+R_3\$ (which would otherwise appear to require a longer discharge time) is compensated by the recombination base current for \$Q_1\$, which also discharges \$C_1\$. So with a little bit of adjusting the ratio of these two resistors you can get approximately equal rise and fall times for the currents in the LEDs.

Anyway, it's easy to try it out. So long as the LED current is modest (in the vicinity of \$20\:\text{mA}\$ or less) the dissipation in the three transistors should be within spec without the need for heat sinks. \$R_\text{SET}\$ should be at least \$\frac14\:\text{W}\$, though. Be sure to verify what I'm saying, by testing and feeling the change in temperature of all three BJTs and \$R_\text{SET}\$, though. Always verify and make adjustments where you feel better is needed.

Even in the best case scenario you're going to lose ~0.7V across your transistor even when fully saturated. You're thinking your LED is still connected to 12V when the reality is that after the transistor it's more like connecting the LED to ~10-11V (depending on your values for R1 and R2)

Then using Ohm's law it's simple to see why your LED isn't getting as bright, less voltage with the same resistance = less current.
What you need to do is calculate what the voltage drop of your transistor will be and then figure out a new value for you current limiting resistor based on your new voltage (\$V_{IN}-V_{CE}\$)

You can avoid the potential divider effect of your first circuit by moving R2 to the switch. It will then have no effect when SW1 is on but will provide a discharge path when SW1 is off. Its value could be about 1/10 that of R1 to keep the charge and discharge currents similar.

Taking a look at your second circuit... 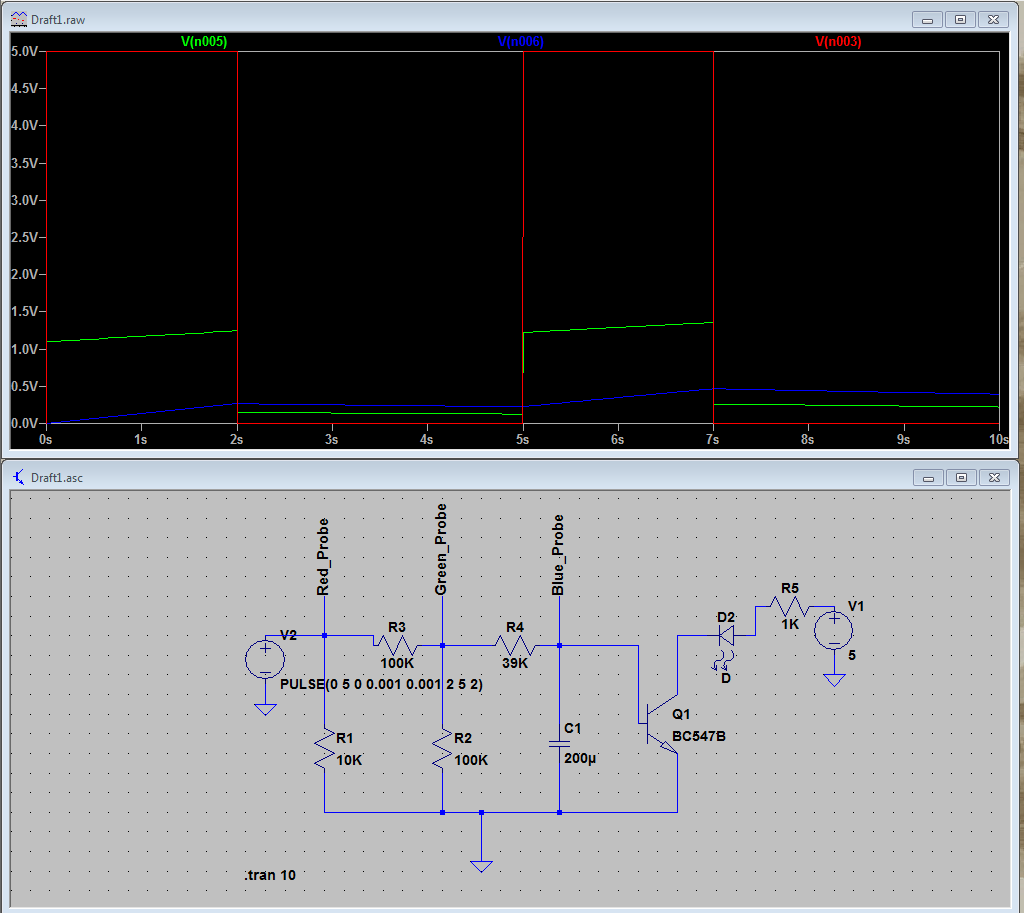 As you can see on the traces in the image above, Q1 is never getting enough voltage to fully turn on. The red trace is at the switch, the green is in the centre of the resistor divider and the blue is at the base of the transistor. This simulation is with the switch being held on for 2s and then let go for 3s.

Your resistors are too high value (and are in an unnecessarily complicated network). I'd try reducing the value of your resistors. The capacitor charge speed will be controlled using the capacitor time constant equations, make sure you've taken a look and plugged the numbers you want into there. A larger capacitor will take longer to fully charge(with resistance being constant).

Instead of using RC you could go PWM. Modern cars use PWM circuits to dim or fade interior and instrument lights. I have seen interior dome lights that fade up and fade down, theater style.

Not the answer you're looking for? Browse other questions tagged transistors led capacitor brightness or ask your own question.

7
Simple transistor & capacitor circuit question
0
Simple circuit to fade in / fade out LEDs randomly
0
Power Supply for 555 Timer LED Fade In/Out
6
Inserting Capacitor into CIrcuit causes LED to fade - Why?
1
Using optocoupler with MOSFET for dimming a LED
2
Dimmer effect (fade) on 12v LED using transistor and Arduino
0
Gradually increase the voltage to fade in LED
3
How to understand this filter circuit
3
Why does this simple circuit oscillate? (Ekasi oscillator)