Why are FPGAs so expensive?

I mean compared to ICs (ASICs) with similar complexity, speed etc. Let's compare Ethernet switches to Kintex FPGAs (note that the most expensive switch from the list is circa as expensive as the cheapest Kintex):

Are FPGAs produced in lower quantities than other ICs? Or is there any technological harness?

FPGA chips include both logic and programmable connections between logic elements, while ASICs include only the logic.

You'd be amazed at how much chip area is devoted to the "connection fabric" in an FPGA — it's easily 90% or more of the chip. This means that FPGAs use at least 10× the chip area of an equivalent ASIC, and chip area is expensive!

It costs a certain amount to do all of the processing on a given silicon wafer, no matter how many individual chips are on it. Therefore, to a first approximation, the chip cost is directly proportional to its area. However, there are several factors that make it worse than that. First, larger chips mean that there are fewer usable sites on the wafer to begin with — wafers are round, chips are square, and a lot of area is lost around the edges. And defect densities tend to be constant across the wafer, which means that the probability of getting a chip without a defect (i.e., "yield") goes down with chip size.

Another key driver of cost is verification.

FPGAs need to be individually tested before sale. This is partly to ensure that all of the thousands to several million routing interconnects and logic cells are functional. The verification however also involves characterisation and speed grade binning - determining how fast the silicon can operate and that the speed and propagation delays of all the many interconnects and cells are suitably matched to the timing models for its grade.

For ASIC designs, testing is typically simpler - a yes-no does the design perform as expected. As such the time required for verification is likely far less, and thus cheaper to perform.

There is one (more) important point which is usually overlooked, process technology.

FPGAs that have high market share are manufactured with cutting edge technology. To be more specific, Kintex-7 FPGAs have TSMC 28nm process and their shipment started in 2011[1]. TSMC had started mass production of 28nm in the same year[2].

I don't know the process of the ethernet switches, but most of the ASIC design companies don't follow the cutting edge technology. It doesn't make sense for foundries as well. 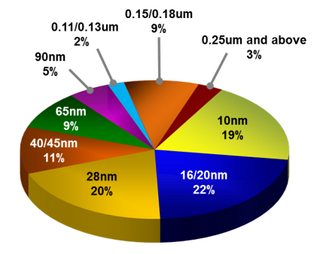 As a conclusion, process technology is one of the factors that make FPGAs more expensive. I don't claim it is a dominant factor, but significant enough to be considered.

I'm going to go out on a limb and say that this is by far dominated by simple supply and demand. Ethernet switches are mass produced with huge economies of scale and sell at discounts over chips that are not so widely used. FPGAs, I'd say, are not nearly so widely deployed as ethernet switches and so they cost more because the development and infrastructure costs are spread over fewer customers.

This isn't about process or die size or anything like that. Consider the Xilinx Virtex-7 (only because I could more readily find data for it) and let's compare to a few contemporaries :

So overall the Virtex FPGA seems reasonably priced (more popular models) compared to other silicon of a similar transistor count, generation, and sales volume. The XBox SOC sticks out as something which was widely deployed in a consumer device and the cost is likewise much lower.

NVIDIA's compute GK110 was much less widely deployed than similar consumer chips that ended up in gaming cards and was similarly more expensive, even given the architectural similarities and the fact that the chips were made in the same factory.

As for the Virtex chips, there isn't a 10x difference in the complexity of the $2500 chips vs the $35000 chips - the latter are simply much less popular and, with lower sales volumes, the cost per unit is necessarily higher.

Not the answer you're looking for? Browse other questions tagged fpga or ask your own question.

23
Are there any Analog FPGAs?
6
Cheap/old consumer devices to recover FPGA boards from
7
Why are multipliers 18x18 Bit in FPGAs?
24
Why are FPGAs used so often for HDMI video projects?
64
Why aren't FPGAs ubiquitous?