Does this experiment show that Kirchhoff's Law hold when there's a changing magnetic field involved in a circuit?

In this video, the electrical engineer and youtuber Mehdi Sadaghdar (ElectroBOOM) disagrees with another video from professor Walter Lewin.

Basically, professor Lewin shows in an experiment that if we have two different resistances connected in a closed loop, and if we generate a changing magnetic field using a coil, the voltage at the endpoints of the two resistances will be different, contrary to the expectations from Kirchhoff's Voltage Law (KVL).

According to the experiment, the left voltmeter VM1 shows a voltage different from the second voltmeter VM2. Lewin then concludes that KVL does not hold when there's a changing magnetic field. The mathematical reason that he gives is that the magnetic field is non-conservative, and KVL can be derived from Maxwell's equations only when the field is conservative. He then says that this experiment is a proof of his claims.

Mehdi, on the other hand, points out two things: first, that the way the probing was done is incorrect. The changing magnetic field has an effect on on the probe wires, and that's one of the reasons why the voltmeters change value depending on the position.

Second, he says that because there's a loop, then the loop is behaving like an inductor, and together with the coil it's forming mutual inductor:

I understand Lewin's derivation of the KVL, so I understand that there's an issue with the non-conservative magnetic field, but at the same I think Mehdi is right: that loop is an inductor, and the way Lewin is probing the circuit looks wrong to me. So where is the mistake here?

The lumped component models to which KVL is applied are just that--models. Like all models, they are only accurate to the extent that they represent the relevant characteristics of the system they reflect. The simple loop of two resistors model does not represent the susceptibility of the conductive path that constitutes the circuit to induced EMF, therefore this simple model will not reflect the behavior of the real circuit in the real world where induced EMF is a thing that happens.

The simple model can be made more accurate by including inductors between the resistors and an additional inductor that represents the solenoid that provides the changing magnetic field. By considering the coupling of these inductors it is possible to incorporate the induced EMF into the model and thus achieve results that better reflect reality. A reasonably complete model of the situation in Lewin's demonstration would look something like the following (source), which is also what Mehdi Sadaghdar shows. Note that the results of simulating this lumped element model closely resemble those of Lewin's demonstration. 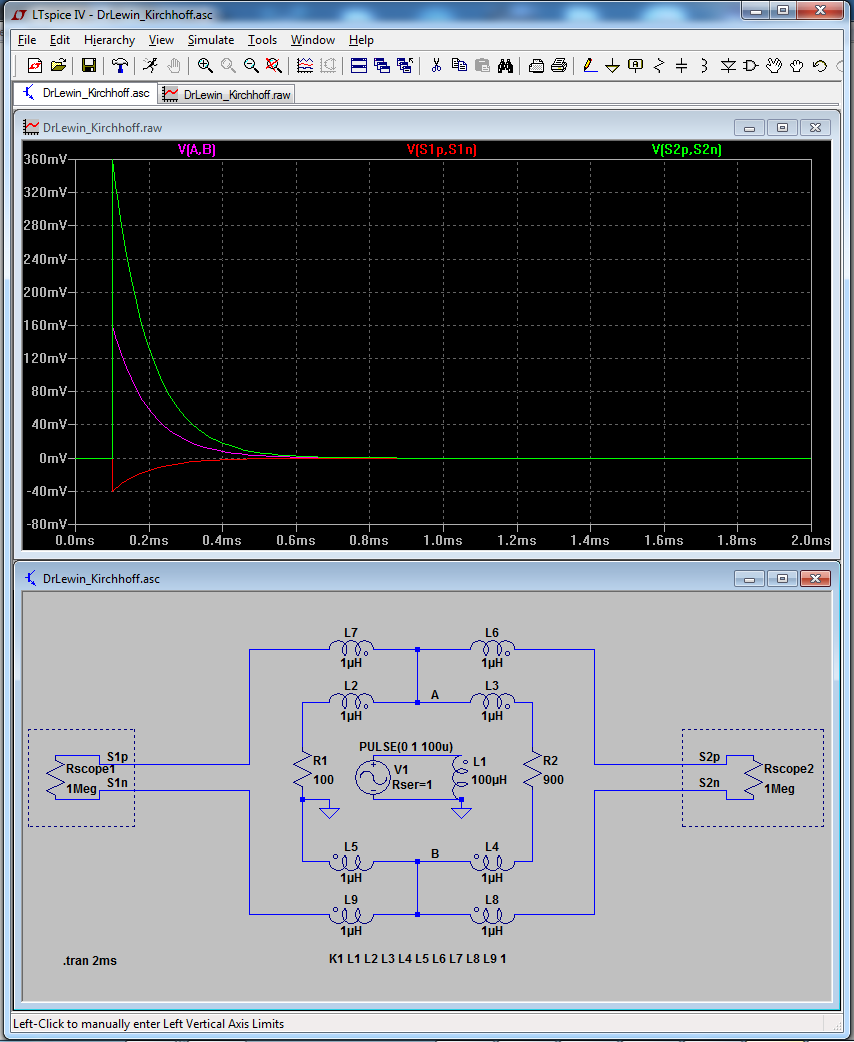 This idea of refining a theoretical circuit model by adding lumped elements to represent parasitic terms (that is, inherent characteristics of a system that are not intentional but are relevant to the system's behavior) is not exclusive to situations where there is a changing magnetic field, and is in fact a common and useful practice in electrical engineering. For example, the behavior of a MOSFET switch can be more accurately modeled by including elements to represent CGS and CGD.

In this case, the inductors represent an electrical phenomenon that is governed by the physical relationship between the elements of the real world circuit. As such, if the circuit is physically rearranged, the inductors in the model must be adjusted to reflect the electrical characteristics of this new physical relationship. This is also a well-understood aspect of electrical engineering, where, for instance, the physical proximity of two tracks on a PCB must be understood as affecting the way the signals in those two tracks interact.

At a certain point, when the rates of change in the circuit state become fast with respect to the physical size of the components of the circuit (including wires/PCB tracks!), the lumped element becomes unwieldy at best and inaccurate at worst, at which point things like transmission line models come into play, but the lumped model remains quite useful in dynamic systems operating well into the MHz range.

So on the whole, Lewin's claim that KVL does not work for the situation he demonstrates is basically correct, but only because the circuit model used does not represent elements that are crucial to understanding its real world behavior.

As a side note, it may look as if Lewin doesn't understand what's happening in this circuit, however he clearly does when you examine the specific language he uses in the lecture and in other materials. From this supplement:

Suppose you put the probes of a voltmeter across the terminals of an inductor (with very small resistance) in a circuit. What will you measure? What you will measure on the meter of the voltmeter is a "voltage drop" of Ldi/dt. But that is not because there is an electric field in the inductor! It is because putting the voltmeter in the circuit will result in a time changing magnetic flux through the voltmeter circuit, consisting of the inductor, the voltmeter leads, and the large internal resistor in the voltmeter

This makes it clear that Lewin considers the voltmeter and its leads part of the circuit, and as he has stated, the path taken through the changing field affects the integral and therefore the voltage indicated by the meter. This is precisely the effect that Mehdi Sadaghdar describes in his video, just observed from a physics perspective (Faraday et al) instead of an EE perspective (parasitic inductances). I'm not sure why Lewin has not chosen to acknowledge this equivalence, other than that he considers the latter a 'right answer for the wrong reasons'.

In this video, Lewin more clearly expresses his objection to formulating the problem in a way that reflects KVL. For this circuit:

Lewin shows that, starting at the bottom left corner and moving clockwise, the closed loop integral of \$\overrightarrow{E}.\overrightarrow{dl}\$ is as follows (note that no term is shown for the inductor because it is assumed to be ideal, ie, superconducting):

Because of these two identities:

We can describe the circuit using this equation:

If we wanted to get something that resembles KVL, we can simply move the term that describes VL to the other side of the equation:

Let me copy what I commented on the video. Of course "Lewin" is right; it is very basic physics.

In the second part of your video, you basically explained why can't a voltage be defined and why Lewin is right. The exact point of a voltage is that it shouldn't matter how you probe it, it should be the same either way. The definition of voltage is electric potential, that is, the voltage difference between two points should give you the necessary total energy to move a charge from one point to the other, no matter the path. If the path matters, than everything falls apart; The field is non-conservative. Of course you can model these effects in different ways, like introducing a transformer, but those are just that, models, with limitations and you should always know that with which limitations does your model work as expected.

UPDATE: I see that some of you are a bit confused/lost. Let me try and help. This is the definition of voltage in words (copied from wikipedia):

Now, what Kirchhoff's Law really says, is that if you take a charge on a trip, but at the and you take the charge back to the starting point, the total work you have done on the charge will be 0. From here you can easily see that it will not hold if the curl of the electric field is not 0 everywhere; because you can than get on a loop in which E always points in the opposite direction of travel and when you get back to the starting point, you will have done a lot of work against the field, even though, you have arrived back to the original starting point.

Fore example, in the loop above (R1-R2) you can keep moving round-and-round and the work done by you will be monotonically increasing.

If rotE is not identically zero, a potential field cannot be defined, voltage cannot be defined (it doesn't exist), thus you cannot even talk about voltage in any context. And the presence of a changing magnetic field does cause E to have a curl, per the Maxwell–Faraday equation.

Does KVL hold in the circuit above?

That depends on how you frame KVL. I think it's safe to say that one should assume that it's defined for a uniform magnetic field, or possibly that it's defined in a magical world where lines on a page are actually perfect conductors with no resistance and neither magnetic or electrostatic coupling to other lines on the same or other pages.

Note that I am not poo-pooing KVL -- but it is limited to theoretical explorations of ideal circuits. You should always have in mind how your real circuits are going to differ from the ideal representation in your schematic.

Is the probing being done right?

Does the circuit have a mutual inductor that should not be ignored?

As drawn in the upper diagram -- yes. But as soon as you put that coil in there, you're adding elements to the schematic that don't fit with the classical assumptions of schematics. You are, in fact, implicitly breaking a classical assumption of schematics: that you can move components around arbitrarily as long as the lines stay connected. By drawing that coil in there you're taking a perfectly good schematic diagram and turning it into a woefully under-specified mechanical drawing.

I believe that the second drawing will let you accurately calculate voltages and currents in the resistors, but to accurately represent the effect on the voltmeters you'd need two more mutual inductances, between the coil and the resistor loop and the leads of the meters.

Not the answer you're looking for? Browse other questions tagged inductor magnetics kirchhoffs-laws probe or ask your own question.

1
Can the coil in a magnetic field be replaced by a copper mesh?
2
DIY Hearing aid T-Loop. Tweaking the resistance of inductance coil
1
How is the current induced in this circuit?
1
At t=0 the voltage across the Inductor will immediately jump to battery voltage. Why?
8
Circuit yields a peculiar contradiction between KCL, KVL and Faraday's law
1
Does this circuit follow Kirchhoff's current law?
0
Boost converter, how does diode allow current from inductor to flow towards capacitor?
0
Back EMF in an inductor with an AC supply
4
Can two voltmeters connected to the same terminals show different values? Circuit with induced EMF
0
For superconducting inductors, does the “magnetic current” flowing in the ferrite of an inductor suffer from “magnetic resistance”?