I am a kind of self-taught electronics dabbler and being a selftaught tinkerer has the unfortunate consequence of reinventing the metaphorical wheel quite often. I'd like to avoid this fate again if it's possible and asking smarter people is one of ways to do it.

My current project requires me to drive, among other things, multiple LEDs (60), in a scheme of 1 diode on - 2 diodes on - 3 diodes on - and so forth up to 60 diodes simultaneously on, as opposed to first diode on - second diode on - and finally 60th diode on - one LED alight at any given time. I obviously can't use one microcontroller digital output per one LED approach due to sheer amount of outputs required. I have my hands on arduino mega2560 with 54 i/o ports and I need most of them for those other things - and obviously one needs 6 bits to encode 60 different signals, not 60 of them.

The solution I thought of, adequate to my knowledge and experience, is combining 8 CD4028 3-to-8 decoders like this 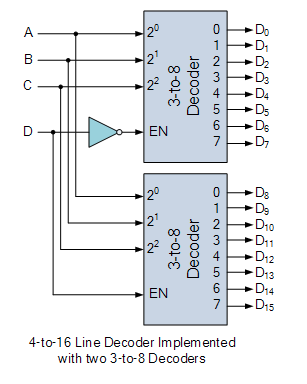 That would provide me with 1 of 64 output and here I run into first snag. I thought of joining the outputs with diodes so I have k outputs in "1" state instead of k-th - but the voltage drop while sending the signal through 60 diodes will be massive. Horrendous. How should I "unsnag" here? Is there some k-of-n integrated circuit decoder I am unaware of and can't google?

Then there's the matter of cost and complexity. I tried to avoid charlieplexing LEDs on 9 bits, because that would be one unholy mess of wires. Too big jumble of semiconductors and ICs would also be more expensive to solder than just buying another mega2560 and using one as 6 bits in - 40something LEDs out "dedicated driver".

Anybody has ideas how should I commence from here? I'll be happy even with just a general direction because another arduino is a plan that will work, I just thought I would like more elegant solution. OFC, I will not power such an amount of LEDs through microcontroller, the question above is all about driving them, not powering.

One simple way to do this is to use multiple shift registers. Each one will have 8 outputs, and 3 data lines necessary to control it. The best part about them is that they can be easily daisy chained. You can easily control 60 LEDs using just 3 microcontroller pins.

There's a great tutorial on how to use them here: https://www.arduino.cc/en/Tutorial/ShiftOut 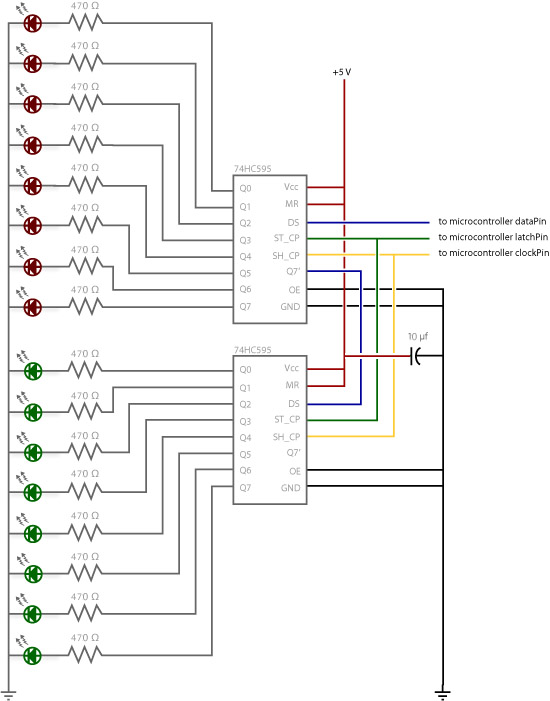 Not the answer you're looking for? Browse other questions tagged arduino led digital-logic circuit-design or ask your own question.

1
How do I select the Correct Diodes and Resistors for my LEDs?
3
Checking materials (cheapest possible) to be used for a solar dark-detecting LED light bulb circuit
3
Finding the no. of decoders required in cascading
3
calculating resistance for LED strips to use as parking lamps and turn signals
0
How can I control a chain of LEDs/buzzers from a single Arduino pin?
0
Are either a Multiplexer or Decoder going to help me with this circuit design?
0
One voltage regulator (varistor?) instead of dozens of current limiting resistors in an LED array?