How to measure 2.5 volts out of 5 volts and serial resistors?

I have a circuit that's being run from a 5v and is essentially a series of resistors. I want to be able to "tap" it to get 2.5v - 3v out of it, which I think would be straightforward, but I want to do this at the end of the circuit.

Specifically, I have a raspberry PI 5v output that goes through a resettable fuse (PPTC), then some heating coils (Kanthal wire) of various resistances, and then to a MOSFET drain. In total, the resistance is about 30 ohms. Source is connected to ground, and the Gate is controlled by the GPIO output of a Pi. This works fine.

However, I'm concerned that something might happen, like blowing out the fuse, and I want to monitor that it's working properly. To do this I was planning on connecting the circuit to a raspberry Pi GPIO input checking that the pin goes high when I turn on the circuit (via the MOSFET).

Simply, how do I connect this? I'd like this check to encompass as much of the circuit as possible. By that I mean that I only want to get the signal on the input if the PPTC and the wires are "working".

Since the 5v is not switched by the MOSFET I can't really tap that to check that the circuit is working. Notwithstanding the that, I considered taping after the PPTC and then using a voltage divider, but that would only confirm that the PPTC is working, and wouldn't confirm the heating elements. I considered tapping after the last heating wire and before the MOSFET, but at that point the voltage measures close to 0v, which wouldn't drive the GPIO input. 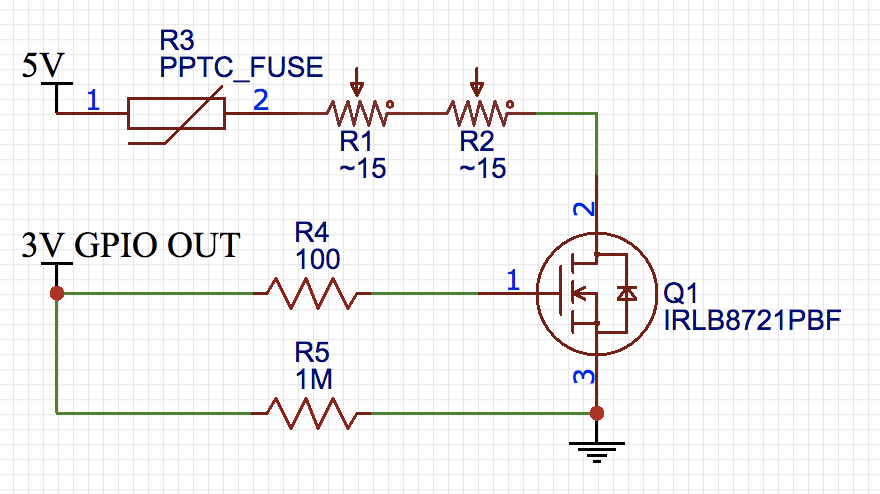 The two variable resistors (R1 and R2) are the heating wires, and are about 15 ohms each, but do vary.

The low current is a small issue, but I believe your best solution is to use a low-side current sensing amplifier (like this one from TI) or just put together your own with an appropriate op-amp.

Place a small resistor at the source of the MOSFET, and amplify the voltage drop up to a usable range. Keep in mind that at these low voltages op-amp input offsets can be a problem, so pay attention to that.

If you can tolerate a much bigger drop, you could use a couple of transistors or a transistor and a resistor in a crude current mirror configuration that pulls down a pin when a high enough current is circulating.

If you want precision in your measurements, there are resistors designed specifically for this purpose. And, as the impedance of the traces/wires can be an issue a 4-point connection would be a must.

Instead of measuring voltages, you really want to measure the current. You can do that with any number of specialized integrated circuits, or you can build your own with a sense resistor (or use one of the series elements) and a comparator.

You can also run the resulting voltages into some ADC inputs and do some math.

Not the answer you're looking for? Browse other questions tagged digital-logic resistors raspberry-pi or ask your own question.

1
How to connect Raspberry Pi to House Alarm Serial Bus (DSC Keybus)
5
Low-side MOSFET: Current seems limited
1
Sharing GND with a device
1
Raspberry Pi crashes When 3.3v or GND on GPIO connected to breadboard
0
Calculating the resistor for a 12V pushbutton
0
Integrating momentary switch with a Raspberry Pi
1
Raspberry Pi Mosfet Switch
0
Raspberry Pi driving a LED through a MOSFET
0
Using one Mosfet to control the gate pin of another Mosfet