I have already asked a question regarding this problem but it was about a different thing, slightly. Here is the drawing of a LED driving circuit. 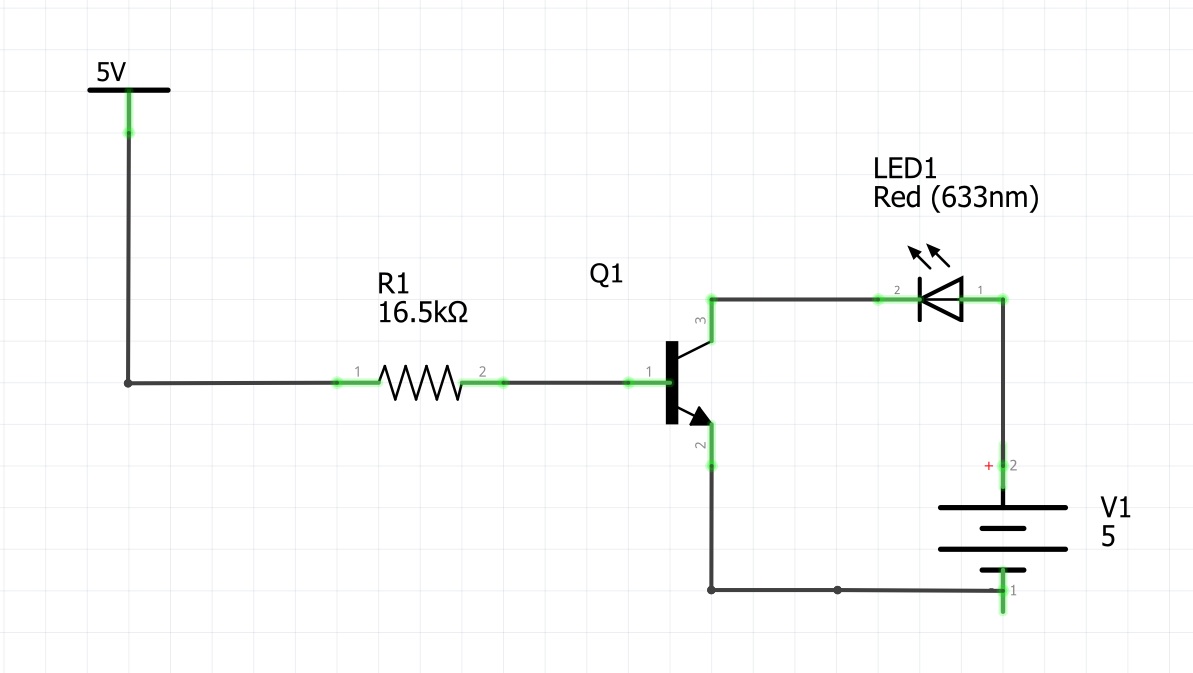 The problem I have encountered with traditional resistor circuit is that I need a very precise current to run through that LED so it produces the desired amount of light.

Lets say 8 bit precision (255 steps). Since LED's Vd can vary with a current I thought that a simple resistor circuit woukdn't be able to give the precision in the desired range, just because there is no way to mathematically express the voltage drop of a LED.

So I came up with the circuit that is shown above. When I showed it to some people they told me that it is a terrible idea to do so without any explanation and looking at me like I am an idiot.

So far the transistor works as a current limiter, it limits current to lets say 20mA perfectly no matter what LED Vd is. It is always going to be the desired current. One problem I ran in to is that a transistor now has a current depending on Vd from its base to emitter. Which again puts me in a situation where I need to mathematically express that and again there is no such a way to do so, because of too many factors I can't control - for example, manufacturing process.

My question is how to precisely express this voltage drops in a transistor or LED in order to manipulate such a small current.

A simple way to accurately control RGB LEDs is with a 3-channel shift register PWM driver.

All you do is use one resistor to set the maximum current for all three LEDs and then program the grey scale values for each LED.

The Texas Instruments TLC5973 has 4096 brightness levels for each LED. The device is programed with a single serial wire. The device has an internal oscillator so no clock is required for the serial data.

I would recommend using 50 mA LEDs for increased brightness resolution. 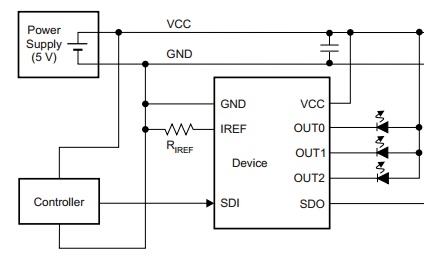 My question is how to precisely express this voltage drops in a transistor or LED in order to manipulate such a small current.

The volt drops in the transistor and LED are subject to temperature variations and are also not constant between one device and the next. You won't get precision and control trying to use the hFE (current gain) of a BJT; to get precision you need feedback.

So, if you want precision, I would consider using a driver with an op-amp like this: - 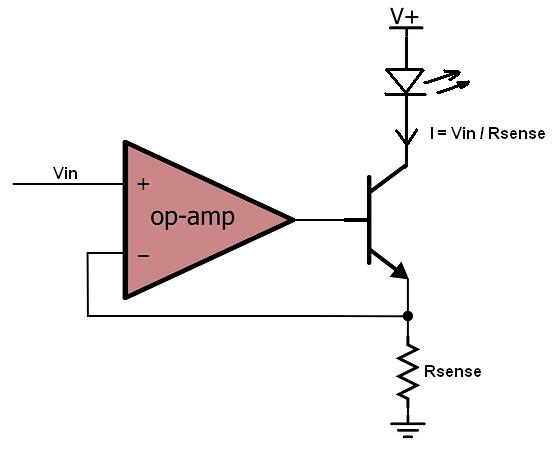 A slightly simpler circuit that drives the LED directly from the op-amp is this: - 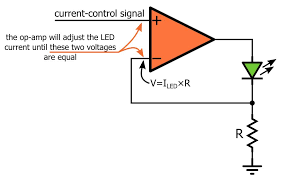 But you need to use an op-amp that can drive the LED current and this limits the devices that are available should current be in excess of 20 mA.

i would like to know how to calculate Vbe which depends on current. it could be 0.6 or 0.7 according to a datasheet. but what it exactly because 0.001 Vbe will affect the LEDS brightness if lets say Hfe is 150

It has an exponential formula if you are interested: -

All three above are generally referred to as the Ebers-Moll equations and \$V_T\$ in the denominator of the exponential is the temperature dependency factor. \$I_S\$ is the reverse saturation current and this will vary between one BJT and the next.

The problem i have encountered with traditional resistor circuit is that i need a very precise current to run through that LED so it produces the desired amount of light. Lets say 8 bit precision (255 steps).

The simple and accurate way to do this is to use PWM and vary the on/off ratio of the LED.

Since LED's Vd can vary with a current i thought that simple resistor circuit wont be able to give the precision in the desired range, just because there is no way to mathematically express the voltage drop of a LED.

There is a mathematical method but VF varies from LED to LED so we don't use that. We control the current instead.

So i came up with a circuit that is shown above.

There are a few problems with your circuit.

There is no current limiting for the LED. If the transistor turns on more than expected due to a difference in gain, etc., the current through the LED may destroy it. Nobody does it this way.

So far the transistor works as a current limiter, it limits current to lets say 20 mA perfectly no matter what LED Vd is. it is always going to be the desired current.

Using seven significant digits is just silly. With standard 1% tolerance components you won't get anywhere close to such precision. You are working with 8-bit control and you will hardly notice the change in intensity for each step.

My question is how to precisely express this Voltage drops in a transistor or LED in order to manipulate such a small current.

You can use a programmable constant current source such as that shown by Andy aka or use PWM. The big advantage with PWM is that the LED is either fully on or fully off. You don't need any analog circuitry and variations in LED Vf are taken care of by the fixed series current limiting resistor.

Let's use sensible numbers. You are looking for 18.0 mA.

... which is straight forward ohms law isnt it ? well i am afraid thats the point i will not be able to apply any kind of ohms law.

You use Ohm's law to calculate the series resistor required for the 'on' current. So, for a 5 V supply, 0.2 V drop across the transistor and a Vf of 2.2 V at 20 mA we calculate

Figure 2. For a low-current LED a buffer can be used (a) or direct GPIO connection (b). Either allows full 0 to 100% dimming by PWM.

So another method is to controll current. thats what i am doing with this transistor with 16.5k ohm resistor attached to it. and a 5V P W M input.

As explained previously this will give poor control. You are assuming an accurate and stable current gain and this is unrealistic.

An interesting problem and I don't see any of the answers providing you with much of the help you may need for implementation.

Firstly let's assume that the solution you need can use PWM to set the light output of the three LEDs in a linear fashion. I'll also assume that you are creating a small point source element since the current is so low (perhaps an optical medical application?). So I'll proceed from there.

The design therefore simplifies to a full scale (approx. 2mA) CC driver that is adjustable and stable around a target current. For example it might be possible to achieve your results with a CC driver adjustable from 1.75 - 2.25 mA for each of the LEDs. You'd have to test this based on the LEDs you use and the RGB current ratios needed to achieve White of course.

I'd suggest a schematic such as this below may suit your needs: 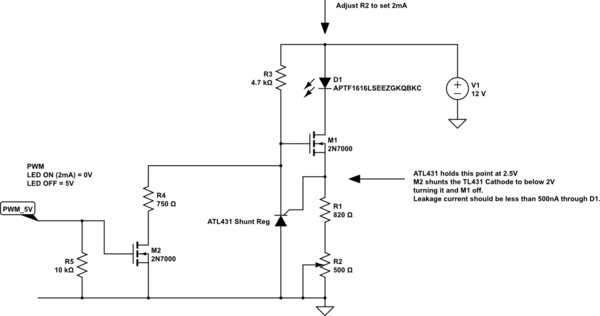 Note that I used an SCR symbol for the ATL431.

You could use either an ATL431 or a TL431. The ATL431 has slightly better stability, and much lower turn on current and ref current so it is a better choice.

Not the answer you're looking for? Browse other questions tagged led diodes ohms-law or ask your own question.