Does somebody have a schematic for a stereo electret condenser microphone?

I’m trying to use a Cmoy headphone amp (built around an OPA2227P chip) as a hard-wired in-ear-monitor.

I bought a stereo electret condenser microphone from Jaycar this afternoon, but I can’t get any response from it when plugged into the amp.

The headphone amp works if I plug my iPad into it.

I’m assuming the microphone needs it’s own power source or a preamp. I need advice on my next step in making this work?

Electret microphones normally have an inbuilt FET preamplifier. You need to bias it from a quiet power supply of some volts in series with a resistor of a few kohms. Obviously capacitively couple to the following amplifier. Experiment and see what happens. If you start with 10 V and 10 k, you're inlikely to damage anything.

Why not just modify the one you have? Most of what you need is already there in your headphone amplifier.

The CMoy is a (very simple) amplifier built from a readily available schematic. 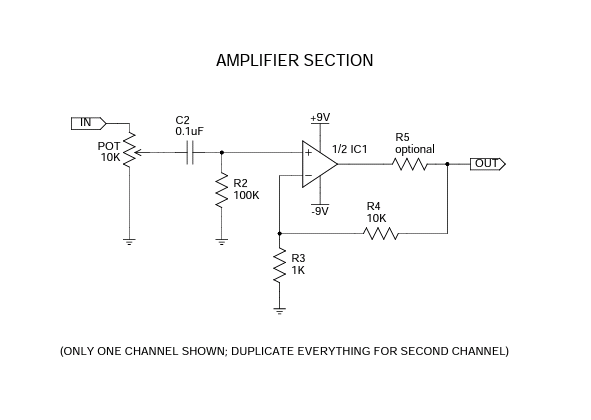 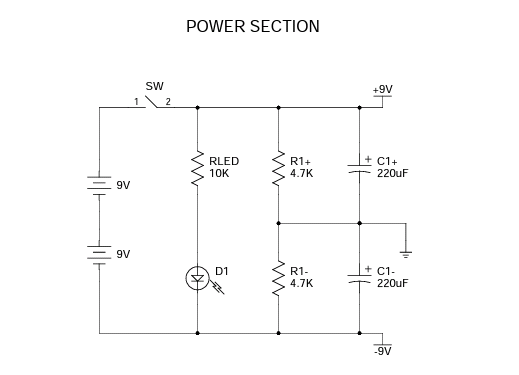 It is intended to drive a headphone from a line level source.

You are connecting two electret microphones to it.

They will also likely require some amplification.

The existing amplifier can easily be modified to provide both of those things.

Bias for the microphones:

You will need two resistors (one for each channel.)

I would start with a value of 1.2k ohms.

The value isn't terribly critical. Anything from 1k to 10k ought to work. I wouldn't go below 1k - too much current might damage the amplifier in the microphone. Above 10k and you might start picking up more noise. Between those values you might see some difference in frequency response - I couldn't begin to guess which way, though.

Try that, and maybe crank the volume of the amplifier up to full.

If that works, you are done

If you can hear a bit from the microphones, but it is not loud enough, then you can boost the amplification.

R4 and R3 set the amount of amplification (the gain.) The gain is R4/R3. The values given in the schematic make a gain of 10.

Remember that you have to do this twice as well - once for each channel.

I have ignored R5 from the schematic - it probably isn't there.

I have also assumed that the microphones are wired to the stereo plug the same way a line level signal would be. It is possible it is wired differently, but I don't see why anyone would

I use 1k in series with the 10k and a 47uF to ground where the resistors join to make the filter.

Not the answer you're looking for? Browse other questions tagged microphone preamp electret stereo or ask your own question.