Base current and Vce relation in NPN transistor output characteristics

Regarding the active region of an NPN transistor and output curves, for a fixed Ib when the Vce is increased the Ic increases; namely Early effect. 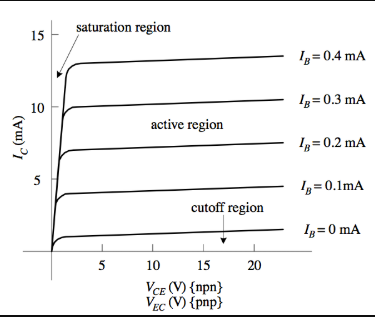 The reason if Im not mistaken is that the increase in Vce makes the base thinner.

How can we logically derive the rest from here?

Here is what I assume when I look at the output characteristics:

But there is a part in my logical arguments which is: "The recombination in the base happens less hence Ib tends to decrease".

But the base current is not only occurring because of the recombination but also because of the holes in base diffusing into the emitter. And to me if the base gets thinner the diffusion should be easier and Ib tends to increase.

So my confusion is when the Vce is increased Ib tends both to decrease and increase. That then invalidates my logic.

Where am I wrong?

The depletion region inside base widens with increasing collector voltage. Because of this, the neutral base width reduces. This leads to reduced base recombination current (\$I_{Br}\$). Now Let us think what happens to collector current and base current.

I think you have slightly mixed up the above two points.

7
Why the base current decreases automatically?
2
Why does the colllector current decrese with decreasing collector-emitter voltage in this circuit?
0
NPN transistor negative base voltage
0
BJT gain.Width of base region vs collector current
0
Transistor input and output characteristics
3
Why Emitter current increases with increase in collector to base voltage in common base configuration of a BJT?
0
Common base configuration, input V-I characteristics
1
Effect of base doping on early voltage,base transport factor and emitter injection efficiency?
0
BJT output characteristics in negative Vce region?
0
Calculate base current NPN high side transistor