In usb C to audio jack systems, is the DAC in the dongle or in the host? [closed]

I'd like to design my usb-c audio preamp, but that would be possible only if the analog audio comes directly from the phone, so that my piece of hardware can take the power supply from the usb-c and spit out an amplified version of that signal

I looked around the internet and found a lot of contrasting information. Do the dongles receive a digital stream and convert it to analog audio, or are the dongles just a mechanical conversion between connectors and the dac is in the system (typically a phone)?

What is the industry standard practice? What does the USB-IF say about audio via usb-c? How an host can recognize when an analog output is required?

It depends. There are a few different ways to send audio over USB-C.

The first way is the same way USB to Audio dongles work right now: The dongle is an actual USB device itself, one that supports one of the USB Audio profiles. This is a DAC that appears on a USB bus as an audio device, and will work just as readily on a desktop or any other device with USB-C and an OS that supports it.

So, in this case, the DAC is very much in the dongle itself. It's more like a USB 'sound card', and will often be a little bulkier and more expensive.

However, for most phones with a USB-C to 3.5mm dongle, the DAC is in the host device, meaning that the signals going out of the USB-C port and into the dongle are, in fact, analog ones. They're the exact same signals that get sent through any other 3.5mm headphone jack, and generated in the exact same way, by some kind of DAC inside the device with the USB C port. So in most cases, yes, the dongle is merely an electrical/mechanical connection that is adapting a USB-C port to a 3.5mm audio jack directly.

It would not make much sense to use a dongle that had an entire DAC and USB audio profile chipset inside it, as this would incur a good deal of cost, consume more power, and be physically bulkier. If the device is a phone, then it already must have a DAC of some kind or it would be unable to drive the speaker that lets you hear the person on the other end of a phone call. These usually come in the form of single chip solutions and will include multiple input and output channels, so this can be done effectively for free.

I do not know why, but there seems to be a ton of misinformation regarding this online which it sounds like you've likewise encountered. What I see most often is something along the lines of 'USB-C is digital audio only' or 'USB-C doesn't have any audio pins'.

...and neither statement is true, at least according to the USB-IF, the only body who has any authority on the matter. 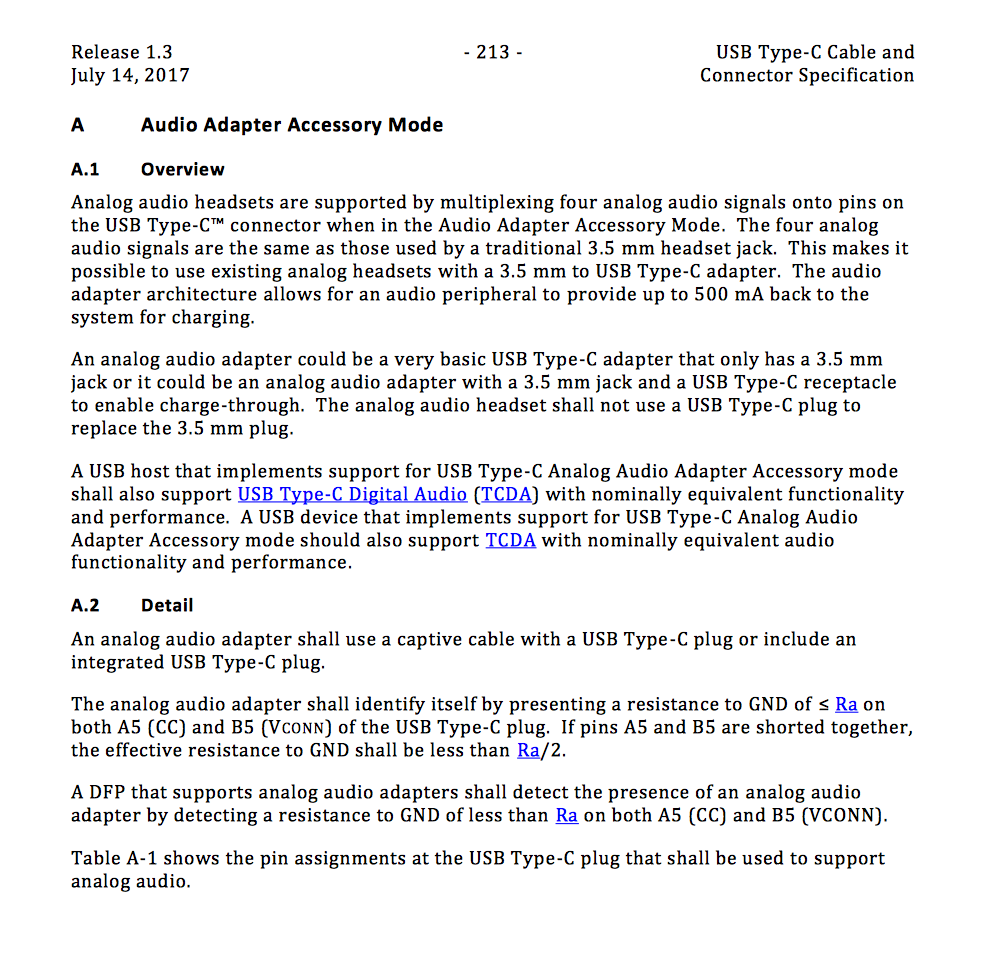 Or just download the official PDF (warning, 20MB .zip) and scroll down to page 213, there is a whole section on it.

Not the answer you're looking for? Browse other questions tagged audio usb-c or ask your own question.