I have a board which has two ground planes, analog and digital, that on this board are completely separate. The grounds connect on another board, which is connected via a flat cable.

All signals on top of the two powerplanes are independent (i.e. they interact on the other board only), except for four "jack detect" signals, which detect when a plug is inserted into a jack on the analog side. These need to cross to the digital side. The jack detect signals are DC except when a plug is inserted or removed. The voltages involved are \$0\$ or \$3.3\mathrm{V}\$, depending on jack state, and read via an I2C expander on this board. The following is a schematic for one of four jack detects, others are identical. 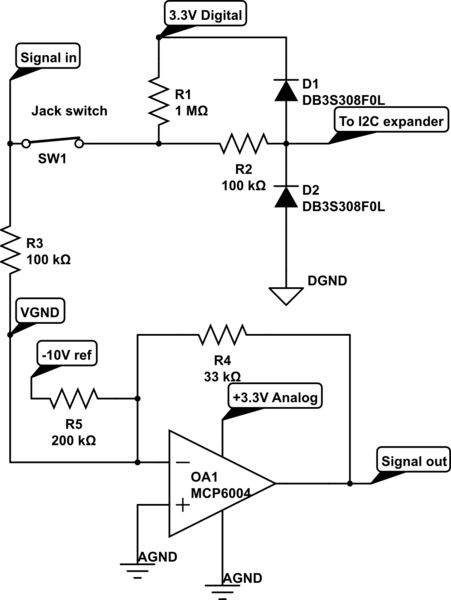 When nothing is connected to the jack, the switch is closed, and R3, which is connected to the virtual ground of the opamp (powered from analog \$3.3V\$ and connected to analog ground) pulls the input low enough to read a logic zero at the I2C expander. So in this case the current comes from the opamp and goes to the digital \$3.3V\$ and the I2C expander. When a plug is inserted, the switch opens and R1 pulls the input up to (digital) \$3.3V\$. In this case the current travels entirely in the digital side, and there's no problem.

The digital side and the jack detect signals obviously only need to be clean enough to always read the correct logic state. However, the analog side contains somewhat sensitive signals, which we need to read to about 12-bit accuracy.

My question: this requires crossing the ground plane split from the analog to the digital side. How should I do it? Some options with justification:

Currently I have a prototype using option 1., which works perfectly fine. So perhaps none of this matters at all, for DC and such low currents?

I agree with Dave Tweed. I forgot to connect the two grounds on a recent design and was puzzled by, albeit small, switching noise I was seeing on a photodiode net. Eventually I discovered the issue and connected the grounds at one point, this got rid of the switching noise.

Not the answer you're looking for? Browse other questions tagged pcb-design grounding groundloops mixed-signal or ask your own question.