Could black-and-white CRT-based television sets be damaged by holding a magnet to the screen?

I know that it is possible to cause permanent (or at very least lasting) damage to some color CRT-based TV set by holding a magnet close to the screen and distorting the picture. SPECIFICALLY: it is possible for magnet activity to leave behind (semi-)permanent colour-blooming damage to the picture. But was there ever any kind of black and white set (again, CRT-based) where the same or similar was the case?

DETAILS (The following took place over 40 years ago, in the first house in which I ever lived.) When I was a kid, I remember being intrigued when I first heard about CRTs, electrons, magnets, etc. I was particularly fascinated by seeing a teacher demonstrate what happened when you held a magnet near to a TV screen and so I decided to try that for myself on our TV at home. However, my initial delight at seeing the picture bounce around under my control quickly changed to fear and dread at what my parents would say when they found out. The reason was that after I withdrew the magnet, although the picture returned to normal in terms of shape, I was left with a distinct purple shadow or "bloom" in the area where I'd been experimenting. Fortunately it was in the corner, not too obvious, and in fact faded away within a day or two. So I was never discovered. But still, it was weird. Subsequently I read that the problem was, I hadn't noticed that my teacher had demonstrated on a black and white TV, whereas my TV at home was a colour set!

However, in a recent discussion with my parents, during which I 'fessed up (well, it's been over 40 years...I figured it would be OK :-) ), I was told that it couldn't have happened as I remember -- at very least, not in the place I said it did -- because according to them, we never had a colour set while living in that first house. My mum insists that we only got our first colour set after we had moved from that house to one in the next town.

A few things could be going on here:

Can anyone enlighten on option 3?

Your magnet will magnetize the shadow mask and deflect electrons from their intended path to the colour phosphor and cast a bloom on the image. 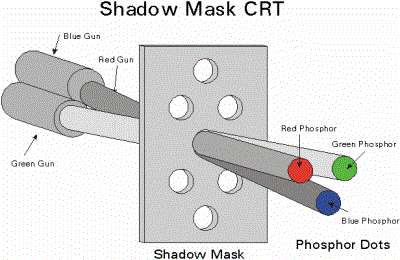 The earth's magnetic field will magnetize the shadow mask as well and if the TV is moved you get the same bloom.

The design of the CRT is such that there is a degaussing coil around the face of the the CRT which applies an alternating, exponentially diminishing magnetic field to remove the bloom.

This happens when the TV is turned on after being off for a while. Your actions with with magnet might have been noticed the first time the TV was turned on, but would have become fainter every day.

There is no shadow mask for a black and white TV so the magnet would have deflected the electrons while it was working, but without any lasting effect.

Not the answer you're looking for? Browse other questions tagged magnet crt or ask your own question.

5
What is the red/orange coating underneath a CRT anode suction cup, and is it important?
6
How CRT allows use of ligh-guns or pens etc?
1
Impact of permanent magnet on component storage
0
5.5" portable CRT television with several black lines
1
What is the effect of a neodymium magnet on a smartphone's touch screen?
1
What the heck is a “radiator plate” in a CRT based oscilloscope?