I vaguely know there are basically the loop/mesh analysis and the nodal analysis corresponding to Kirchhoff’s voltage law and Kirchhoff’s current law, respectively. And one can do Fourier transform of a periodic circuit network and then solve a system of linear equations. However, in the following example, it seems that the two analyses look quite different. 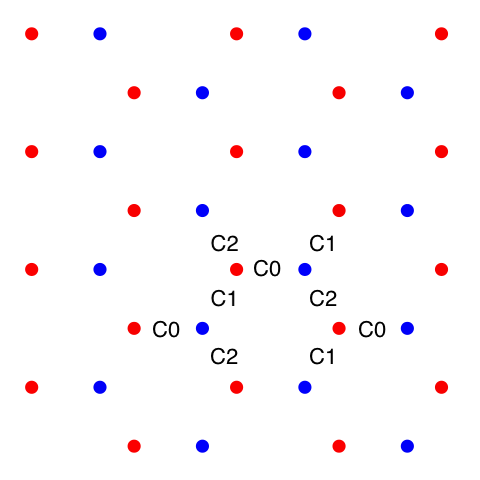 In the periodic network shown, the building blocks are three different capacitors C0, C1, C2 on the hexagonal edges. For simplicity, I only show a few of them. In nodal analysis, the independent nodes are just the red and blue ones, hence two unknown voltages. On the other hand, in loop/mesh analysis, it appears to me that only one unknown, the loop charge/current, would be enough. This means that, after Fourier transform, the numbers of linear equations are different, 2 and 1, respectively.

This looks rather mysterious to me. I am not very sure of the loop analysis. Please correct me if anything wrong.

I have no idea of how your analysis proceeds from here, however the number of variables is the same.

Keep in mind that voltage is a relative variable while current is an absolute one.

When you say the “voltage of the node” you have implicitly added a variable to your system. Your reference “ground” potential, which is not defined for your problem setup and would only show up in the infinite set of initial conditions for the system.

Instead if you say “the voltage between two nodes” you have removed the need for that arbitrary reference (and it directly relates to the associated current).