Driving LED with 555 timer and BC639 transistor

I am trying to produce an LED dimmer circuit using a 555 timer circuit and a BC639 NPN transistor. I know there are better transistors that would suit the task better, but the BC639 is what I have to work with. 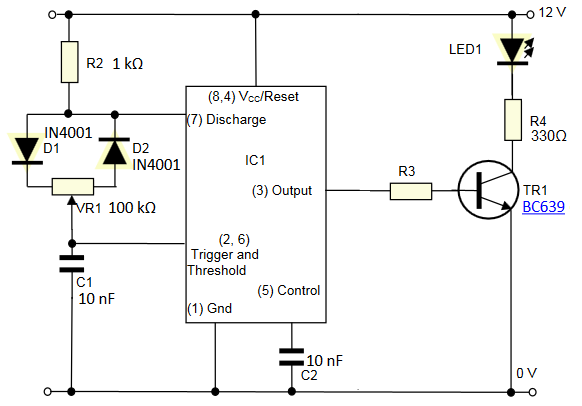 I am using a BC639 NPN transistor to drive a white LED, with a maximum forward current of 50mA. I have put a 330Ω resistor in series with the LED so that the current is 26.36mA.

I'm trying to figure out how to make it so that the LED turns all the way off when my 555 timer is outputting the lowest average DC voltage.

I have been told that this is down to the value of R3. I have calculated a value for R3 of 51.4kΩ:

The value of the base resistor has nothing to do with the range of the PWM.

R3 should be more like 10K to fully saturate the transistor (forced beta in the range of 20).

When the output is high (LED 'on'), the capacitor has to charge through R2, which means that the "on" time is limited by the time constant of R2 and C1.

You can try "flipping" the output (if you have an ancient design bipolar 555 you may need a pullup to turn the transistor off fully), so use a PNP transistor and the same value of base resistor. Then reverse the CCW and CW sides of your pot.

That will mean your LED output won't go as close to 100%, but that will have no visual effect-- the slight amount 'on' is much more noticeable than a slight reduction in full brightness.

The output will still not be completely off, but it will be greatly reduced in brightness. A small capacitor, at a guess around 1nF between base and emitter of the transistor can eliminate that short turn on, at the expense of the transistor running a bit warmer.

Not the answer you're looking for? Browse other questions tagged 555 npn or ask your own question.

6
LED driver circuit interfering with 555 timer?
1
Dimming an LED Strip (9v) with a 555 timer and MOSFET
3
How does this circuit work to fade an LED in and out?
2
555 Timer Stops working after a few seconds
2
555 timer circuit switching automotive solenoid with PNP & NPN switching transistors
2
Designing a circuit with a "short-lived" switch with 555 IC
0
Multisim - Circuit Design with a 555-timer
2
Appliance countdown timer using current transformer and 555 timers