Since, I was stuck in so thought of retracing my steps and checking each part of the circuit and then only moving further ( to the triac part ).

Turns out I am not able to do zero crossing detection even.

My code in arduino :

Following is the circuit diagram :

Now, I am a newbie in DIY projects and since this circuit wasn't working so, I thought I would post my breadboard circuit here too.

Please have a look into the physical circuit. 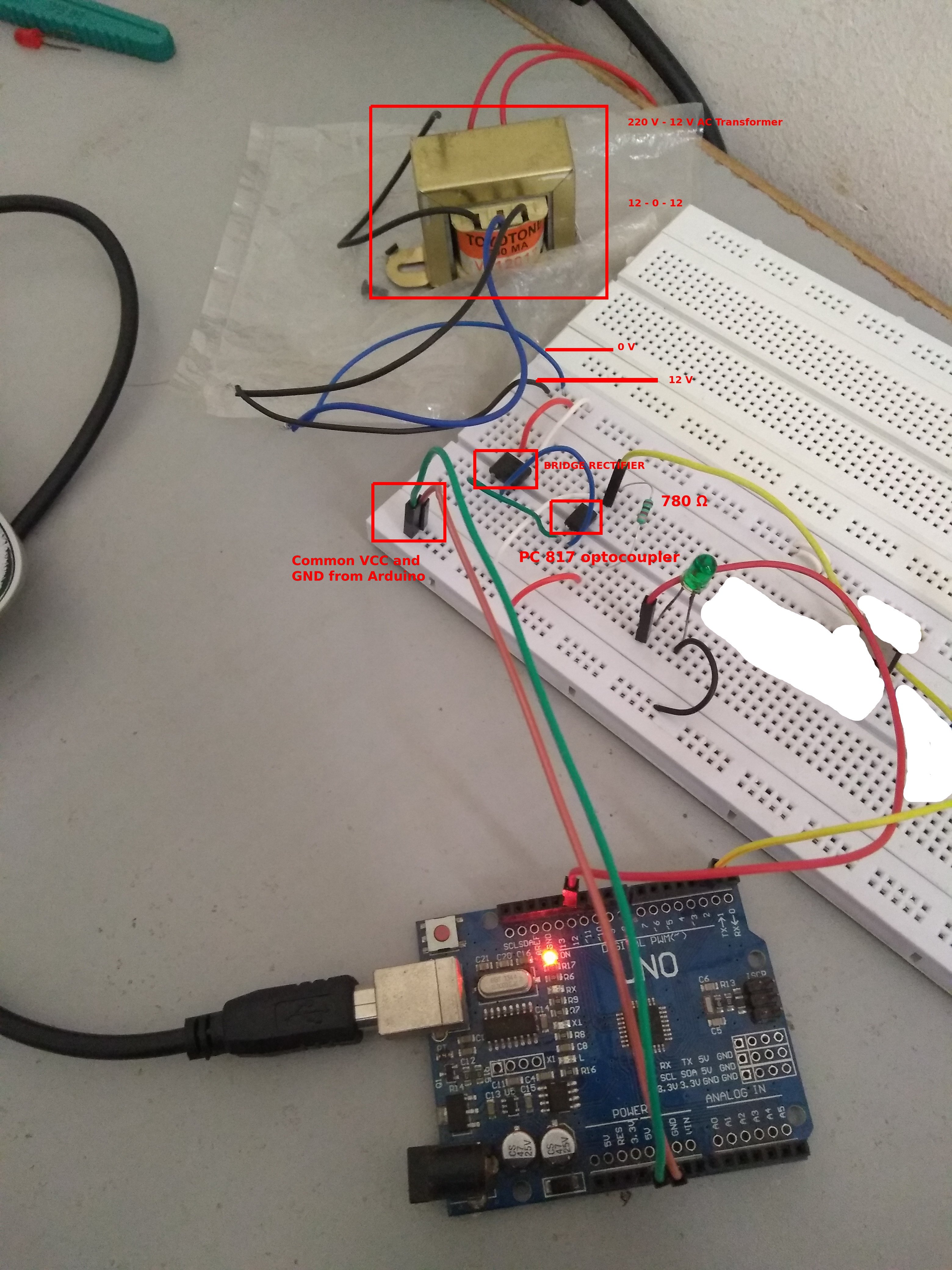 ( I have erased the irrelevant parts of the circuit )

The yellow jumper wire from PC 817 is sent as interrupt to the arduino's digital pin 2 ( as can be seen in the diagram ).

The arduino detects the RISING signal on it and calls the ISR. I have checked the output on the pins of PC 817 going to the arduino ( using a multimeter ) , it gives ~10 V.

I have added a common ground and VCC from arduino , as later in the AC dimmer circuit it's going to be used ( and my understanding is that wherever VCC is of arduino , gnd also must be of arduino and not from somewhere else , right ? ).

I have added a resistor to the input of 4n25 which inputs 2 V ( I am considering a higher resistor as the max forward voltage for 4n25 is 1.5V ) 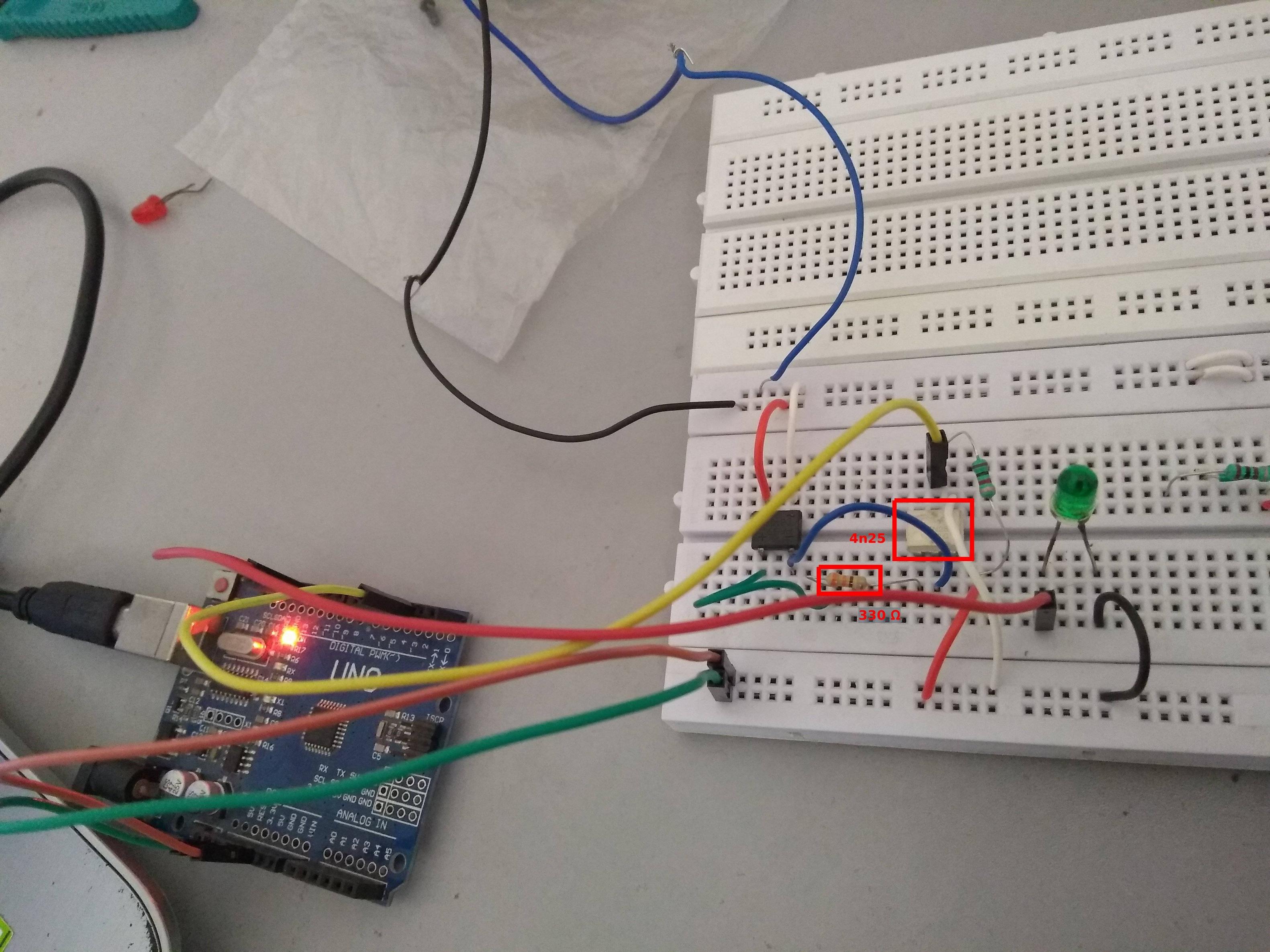 I have also tried

I changed RISING to FALLING, it still didn't work.

I got to glow the LED, I forgot to define LED's pin as the output pin in the arduino code but then also it glows very faintly and even multimeter can't find the potential drop across the LED

The zero crossing circuit you've designed is conceptually correct: however, it is not properly dimensioned. Precisely, the \$30\mathrm{k}\Omega\$ resistors that you removed from the original circuit not only have the function reduce the voltage going to the \$T_5\$ optocoupler (4N25 type) to a non destructive level, but also limit its input anode current \$I_A\$. Without them, the input photodiode of \$T_5\$ is likely to be destroyed at power-up. Therefore you should add two other resistors in series to the secondary winding of the transformer, in order to limit the maximum value of \$I_A\$.

Edit. Even if the problem seem likely to be solved by setting properly the pin of the Arduino board, the OP has asked advice on how to properly dimensioning the input resistor of the optocoupler, so I decided to add the following notes. Let's start by considering the following BJT-output optocoupler standard circuit: 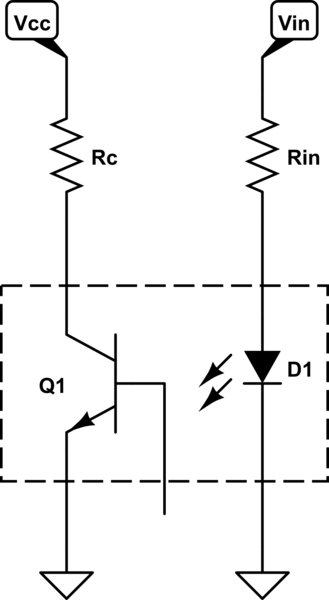 Not the answer you're looking for? Browse other questions tagged arduino circuit-analysis circuit-design breadboard diagram or ask your own question.

2
Connecting X10 to Arduino
2
How many external interrupts has attiny85?
2
AttatchInterrupt Constantly interrupts
0
problem of transmitting data from serial device to bluetooth on Arduino
0
op amp with single supply - non inverting circuit gain not being produced
3
Why is serial output from shift register offset from others?
1
Arduino to Attiny841 with ATTinyCore — pins not working
3
How does my breadboard circuit diagram look? Is my circuit going to explode?