Wiring of body terminal in a network of MOSFET switches

I am trying to design a set of switches in a cmos design. The switches are supposed to control a number of capacitors and I want to implement them as single NMOS or PMOS transistors.

Based on my understanding I have done the following: Choosing PMOS for switches where the voltage signals switched are closest to VDD and NMOS for switching voltages closer to gnd, to enable optimal drive conditions and this way decrease Rds_on. All the switches are driven rail-to-rail.

I also think that I have to ensure that all the switches operate in the ohmic region.

I have also heard that transistors in common design processes are symmetric devices. Does this mean that it does not matter if the drain and source terminal are swapped? Does the body potential influence this polarity?

Usually if you want to use for example an NMOS as a switch to ground you would simply connect the body (bulk or backgate) to ground. Then source = body and things are simple, Vgs is the same as Vgb (gate-bulk voltage).

Note that when we want to operate this NMOS as a switch we want a large Vgs. In the (grounded source) example I mention above Vgs = Vgb. Now think about it, do we actually need a large Vgs or do we really just want a large Vgb?

The conductive channel in an NMOS forms when Vgb is large enough. So when the Gate to Body (bulk, substrate whatever you call it) is large enough. Would the channel still be there if I disconnect the source: yep.

So the source voltage/connection doesn't matter that much. The large Vgb is what we really want and need. So that means we should connect the Body to the lowest voltage so that Vgb becomes as large as it can be giving us the lowest on-resistance.

If you're designing this circuit to be on an IC then for the NMOS you might not even have a choice. If the NMOS are made in the "global substrate" of the silicon die than you have no choice: all NMOS Body contacts will be this "global substrate" and will be connected to ground.

Some CMOS processes do allow you to make a separate "P-well" to place your NMOS in. But even then, for reasons mentioned above it is still the most beneficial to connect the Body contacts to the lowest voltage, i.e. Ground (or VSS).

For PMOS you generally do have a choice as these are inside an "N-well". Generally this N-well needs to be connected to the highest voltage which is the supply (VDD). The Vbg and channel story also applies to the PMOS so generally you can just connect the Body to VDD.

I have also heard that transistors in common design processes are symmetric devices.

If you look at the most simple sideview of an NMOS transistor, you can see that the transistor is indeed symmetrical:

And in all CMOS processes the "basic" transistors are symmetrical, source and drain are the same.

Only for "special" (for example RF or High Voltage) transistors this might not be the case.

For PMOS the same is true, the "basic" PMOS transistors are symmetrical, source and drain are the same.

Does this mean that it does not matter if the drain and source terminal are swapped?

Does the body potential influence this polarity?

No it does not, as the drain and source are physically identical structures.

In the low-voltage CMOS processes I have used, there are no layout differences between Source and Drain. There are, in two high voltage processes, either required Drain implants or optional Drain implants; these implants reduce the intensity of the voltage gradients in the silicon.

If your FETs are laid out on the substrate, as would NFETs on Psubstrate, then you have no control of the behavior of the FET's backside/bulk/body. In some processes, such as twin well, both types of FETs are in tubs (one type would be in nested tubs), you do have control of the body, but at substantial increase in layout area, unless you can share the tubs. 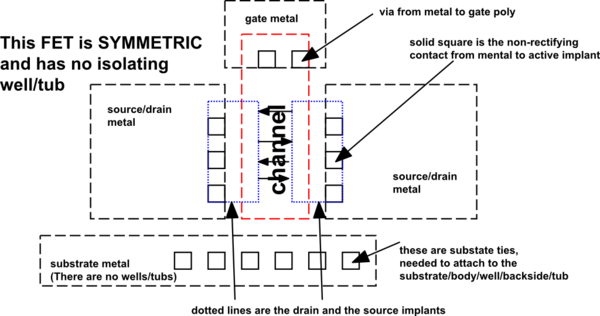 BLUE DOTS is the active implants for drain and source. In this layout, the DR and SRC are identical, and thus swappable.

Red Dashes is the gate structure.

Black Dashes is the metallization

Small Black Squares is the contacts from metal to active, or form metal to gate (poly here)

The BULK/BODY is off to the side.

Not the answer you're looking for? Browse other questions tagged switches cmos nmos pmos source or ask your own question.

1
How can PMOS eliminate body effect but NMOS doesn't?
3
CMOS technology, use a NMOS or PMOS as series switch?
2
Turning an NMOS with substrate terminal into a PMOS
3
Driving Inductive Load with MOSFET: N-Channel vs. P-Channel
1
What is the effect on propagation delay when we have a CMOS circuit with multiple transistors connected in series?
0
Deriving the NOT logic gate using PMOS logic
0
Voltage drop across PMOS (power mux circuit with two load switches)
0
Power switch PMOS controlled by button or Microcontroller (or both, with an OR circuit)