Is this a case of ground loop?

On the first test with this schema, there were several issues, most importantly the GND wire between the Arduino and the driver board burned and some sparks appeared on the driver board when the motor was started using an Arduino signal. The Arduino also had some difficulties and kept rebooting.

I was wondering if this is a case of ground loop? If yes, how should the Arduino/driver board data section be isolated from the high current?

One of the battery is also connected to the Arduino to provide 12V input current (I now know this a bad practice, but left it on the schema in case it might play a role). In the future, the Arduino will be powered with a DC/DC switching regulator from the same 24V cables going to the motor driver.

Oddly enough, the schema works perfectly when the Arduino is powered by USB (from PC) and the driver board by 120V/5V AC wall converter. The motor driver also has test buttons which allow to test the board and power the motor without the need of an external MCU. When using those buttons, there are no sparks, nor burnt wires.

The Cytron datasheet does not indicate if the driver board is isolated, so I thought the motor current might go through it, then to the Arduino, then back to the battery.

The motor is a 24V DC motor (draws under 10Amps), similar to a windshield wiper motor. The batteries are 12V car batteries. 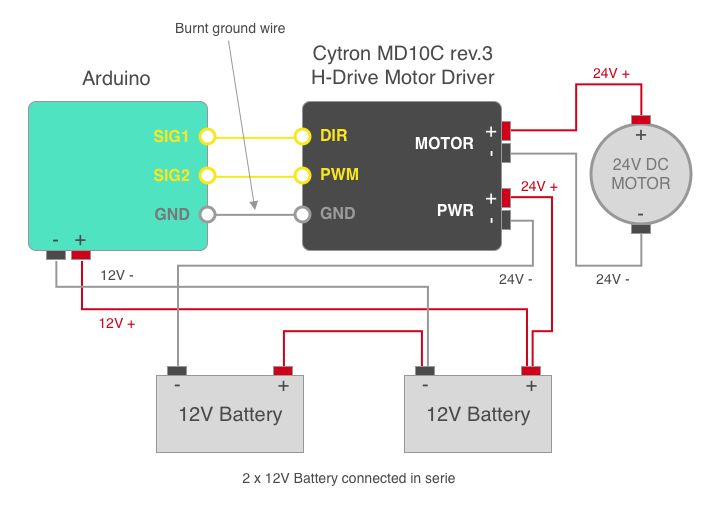 Thanks for your answers. Below is a suggested schema using a DC/DC Step down regulator to provide the 12V to the Arduino. I also added fuses in series with the battery bank. I assume that the shared ground would remove the possibility of short-circuit? 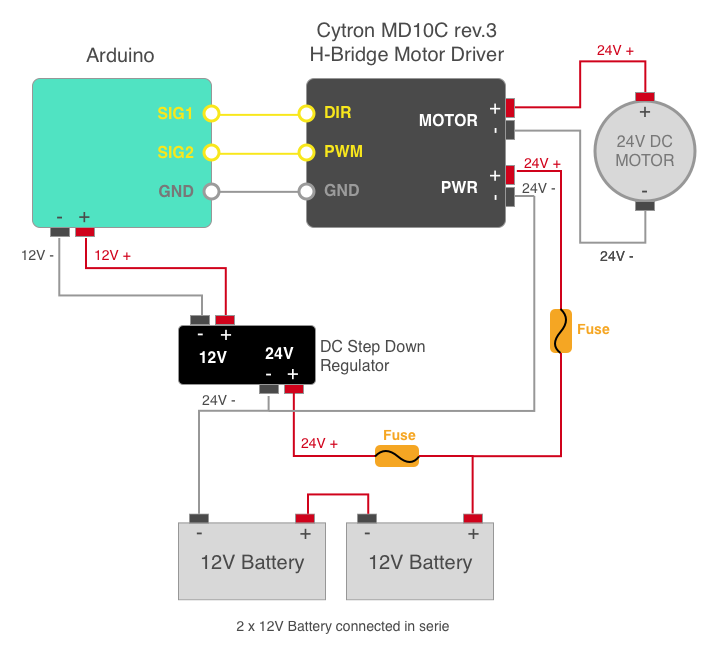 Not a ground loop. But a short circuit: 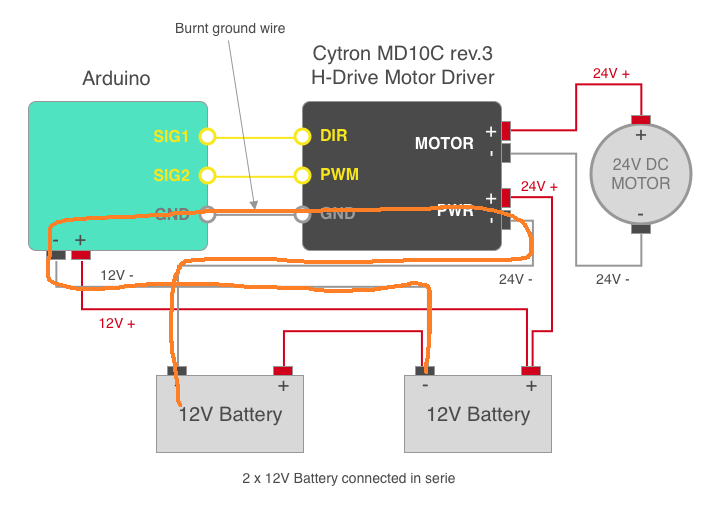 Always use fuses with batteries.

Instead, you can make it like this, so that there is only one common ground: 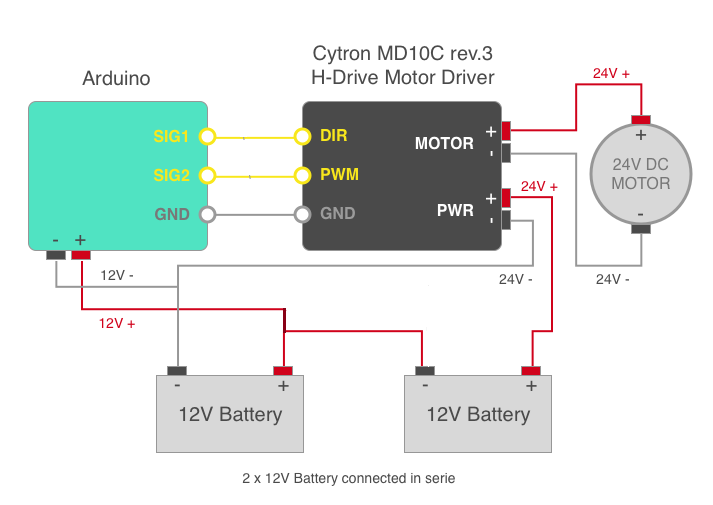 Drawback is unbalanced load on the battery. Meaning the left battery depletes faster, possible damaging it when the set is deep discharged. I recommend a battery balancer, or a 24V-12V power supply instead.

There is almost certainly a short circuit on the left hand battery.

A quick check with a continuity tester should confirm that battery -ve connects to logic input ground on the motor controller.

I would suggest the following:

If you can confirm the Arduino is grounded through the motor driver then don't make a second ground connection to the battery. Leaving this off prevents a situation where the heavy ground from the battery gets interrupted and the motor current flows through the lighter hookup wire and Arduino groundplane. The Arduino's current consumption should be low enough to easily pass through the lightweight control lead ground.

If not using a DC-DC converter I would suggest adding a series resistor in the connection from the battery to arduino (remembering to take 12V from the mid point NOT 24V). You can probably "afford" 10-100 ohms depending on how many LEDs are in use, and this will act as a cheap barrier to prevent switching noise from the motor driver reaching the Arduino. I'm assuming you can drop 5V and still meet the 7v requirement.

When using an isolated DC-DC converter things get simpler, as now the only common ground between the motor driver and the Arduino is through the control connector. This means that DC faults in the motor side shouldn't be able to pass back through to the Arduino.

I'm also a little concerned that a "12V" battery may actually be nearer 14V when off load and may exceed the Arduino's stated max input voltage, but if a suitably rated DC-DC is used this will be irrelevant.

Not the answer you're looking for? Browse other questions tagged arduino batteries dc-motor h-bridge groundloops or ask your own question.

0
How can I limit the current in a 12v car battery to be safe for my 25a motor driver?
0
How to power up arduino and two 6v motors with 12v LiPo efficiently?
0
Running different voltage motors from one battery
0
Powering my Arduino Nano with 24 V DC
1
motor controller requiring a battery in parallel with DC power supply
4
Why did this arduino burn out? SilentStepStick (TMC2130) stepper at 24V
0
Battery powered circuit protection
1
How to get right voltage output with Bts7960b H-Bridge?