Why are the curves for growth and decay of current in inductors of exponential nature i.e $$ 1-e^{-x} $$ and $$ e^{-x} $$ respectively. I understand the mathematical derivation for the current i(t). But I want to know the factors like change in flux, application of voltage across the inductor, etc cause the growth and decay of the current to be of exponential nature.

This is quite the question.

Let me start by saying that the factor \$e\$ has been invented to make our life a bit easier. Any power can be written as another power with a different base as follows:

The usual way how this relationship occurs is when a quantity changes linearly according to its own value in some way. Ie. if the quantity increases, then the rate-of-change of that quantity will change proportionally.

Your question could be considered invalid though, because there are a lot of circuits with inductors and capacitors that don't change exponentially. For example: 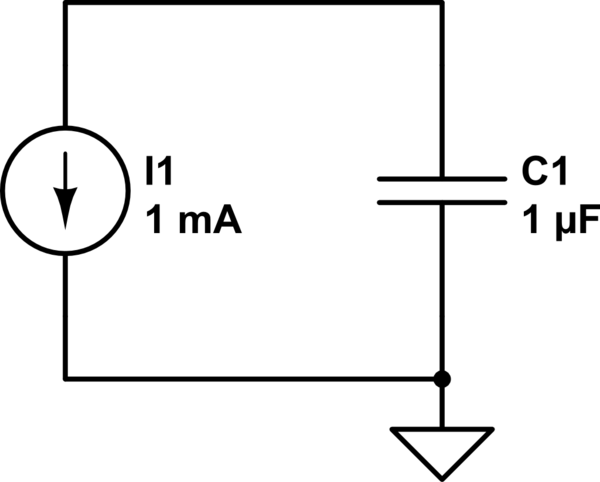 The current through the capacitor is constant, and the voltage changes linearly. There is no exponential involved.

An example of where it does seem to be the case would be: 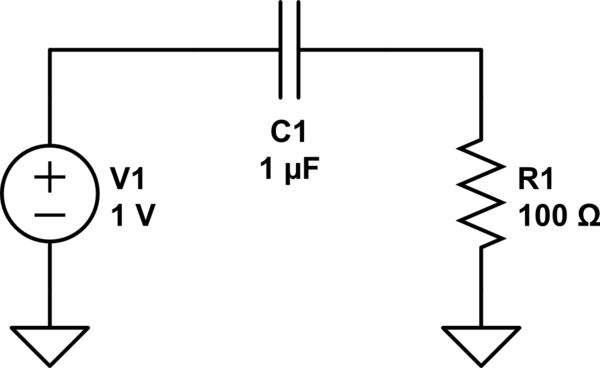 The current through the capacitor depends linearly on its own voltage, because of the added resistor. The behavior of a capacitor is such that \$i = C\frac{dv}{dt}\$ so this means a derivative will ultimately be linearly dependent on its own value. This circuit will result in a solution with an exponential.

Rather than talking about flux, voltage, current, etc. you should consider that having a solution that is exponentially changing is something much more basic.

Not the answer you're looking for? Browse other questions tagged current inductor iv-curve or ask your own question.

14
Questions About Inductors
2
selection of RF inductors
0
Steady-State DC Analysis: Inductors and voltage sources
0
Ramp current in inductor
1
Can inductors always be avoided in analogue filter design?
8
Can I use a common mode choke as a coupled inductor in a SEPIC converter
0
What should be the sign of the voltage across the inductors while doing circuit analysis?
1
Saturation current on chip inductors
2
Why isn't fast decay mode on an h bridge damaging