I made a simple FM transmitter following https://maker.pro/custom/tutorial/how-to-make-an-fm-transmitter and it worked! Now I need some help to understand how. 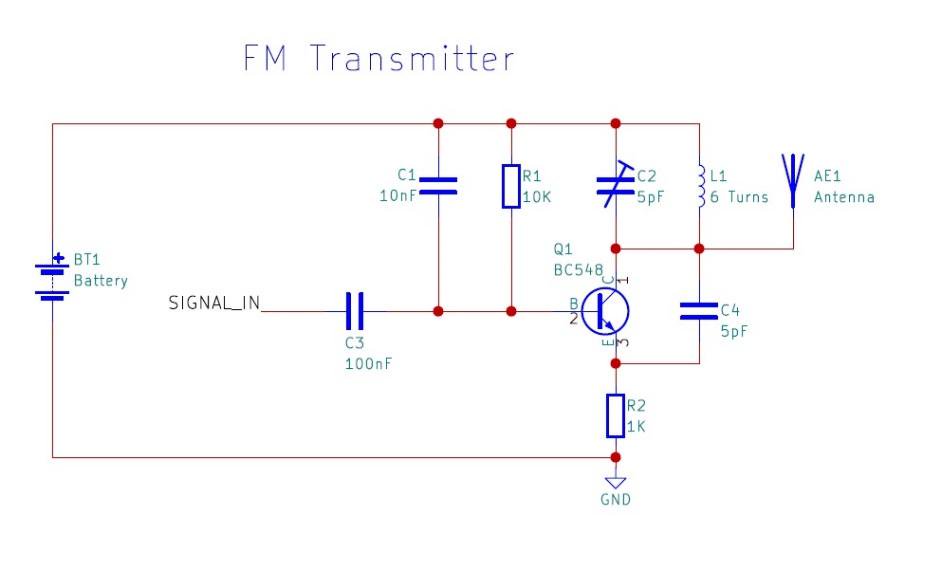 My coil is made of 1 mm copper wire has 6 turns and 8 mm wire diameter. According to this online calculator: https://www.eeweb.com/tools/coil-inductance this means that: L = 3.9e-7 H

I did not have any 5 pF trim capacitor so I used a 3 pF capacitor instead.

Am I correct in assuming that the frequency this will transmit on can be found by looking at the L1 C2 as a LC oscillator and using the frequency formulae:

In a LC circuit I understand that the signal decays exponentially over time. That is hopefully not happening here. Why? Because of C4 maybe?

Also what is the purpose of C1?

If I want to increase the range of this FM transmitter somewhat can I do this by simply replacing R2 with a 470 Ohm resistor?

Are there free simulator programs that let me see the resulting spectrum at the antenna?

Resonant frequency formula is nearly correct. You have mostly one L - stray inductance is not included. But you have four capacitances that can be assumed in parallel:

Again, stray capacitance hasn't been included - it will cause \$F_r \$ to be even lower. Because L's and C's are so small, using this formula to hit a desired frequency is very difficult.

This is an oscillator whose amplitude doesn't decay, but grows until non-linear losses limit the amplitude. C4 is the element that mostly causes positive feedback - making this transistor oscillate.

C1 is a "bypass" capacitor that grounds the transistor base at the oscillating frequency, but allows low-frequency audio to change base voltage. At audio frequencies, reactance of C1 is mostly insignificant.

Everybody wants more range. Making R2 too small will kill the oscillations. Power output might increase, but you'll hardly notice range improvement. A power amplifier would improve power, but would likely violate FCC rules (in America).

Using SPICE to see the FM modulation would be extremely tedious. You must use a transient analysis with time-step small enough to have many steps at the oscillating frequency (about 100 MHz). Yet the simulation must run for milliseconds.

in an LC circuit thye signal decays, but the transistor is an amplifier ant it prevents the decay creating an oscillator.

R1 limits the power available to amplify the signal and thus puts a hard limit on the output power of the oscillator. replacing it with a smaller resistor would make more power available but would also reduces the gain of the amplifier- there's no guarantee that it would increase the signal amplitude. a better move would be to put a choke there instead. increasing the supply voltage will also help.

Not the answer you're looking for? Browse other questions tagged transmitter fm or ask your own question.

0
How to choose an antenna for an FM transmitter?

3
Does this simple RF transmitter circuit actually work?
1
Boost a weak AM transmitter
1
Is there anyother way to construct an FM transmitter
3
Is it possible to make a coil-less simple Shortwave Receiver
3
How can I modify the frequency of a simple 433MHz transmitter module?
0
Is a coil FM transmitter frequency affected by my body static?
1
Collector-Base capacitance in simple FM transmitter