I did buy a board from this site, which basically allow me to connect buttons, switch and other controls with ease and no need to program anything: http://derekspearedesigns.com/dsd-36-button-controller-avx.html

Now, I did order some buttons and realized that they are made for some sort of connector; I tried to solder wire on the contacts but the wire breaks at the junction, as soon as you move the connection a bit. This is how the buttons looks like: 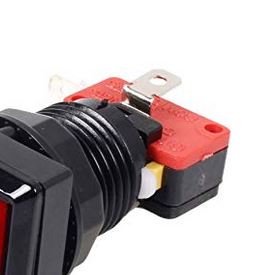 Is there a connector that slot into these connections; and is solid enough to not come off? I did look at sites that sell arcade accessories, and the only thing they sell is daisy chained wires; which is not what I need, because the board I own, require 2 connections for each button. I could cut and modify the chained wire but I want to see if I can get the correct connectors first.

The second issue is related to how to power the button LED; since they support 12V. I did buy a 12V step up that works fine with the square buttons, which takes the 5V from USB and output 12V for the LED; since the switch connections are separated from the LED connection.

But I also use this type, which has just 3 poles instead of 4; and my concern is that the board seems to be 5V tollerant, so if I add the 12V coming in from the step up device; I may fry the board? 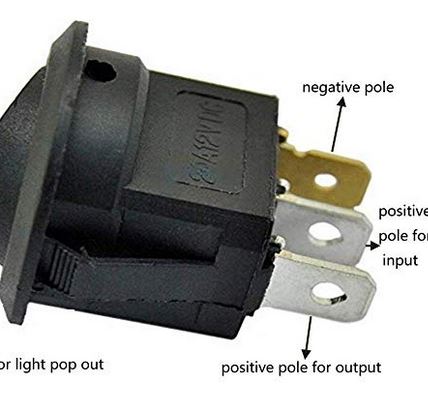 They're called "quick connects". Here's a link to the DigiKey site, although any distributor (not to mention your local auto parts store, and maybe even Radio Shack) will have them.

They are also solder tabs. What you describe is a cold solder joint. This happen a when the connection you are trying to make is not heating up the metal enough. Large metal connections need more heat so it depends on how you are trying to solder, and the strength of your soldering iron.

As for the second switch type, you are probably correct. The center pin is common to both the led and the output. If this is for a gpio input, simple method is using a voltage divider at the output. Use it to bring down the 12V back to 5V.

1
How should I wire up ground when using an ATX power supply to power an Arduino and several LED strips which in return are controlled by the Arduino?
0
1 Device, 2 Power sources?
2
Power connectors for very long LED strips
5
Should I step-up or step-down the voltage if I have the option?
0
Problems extending a 12V power lead to an RGB-LED strip
0
PCB Ground Plane and Redundant Connections to Common Ground