RF Splitter/Combiner with vectors in phase and antiphase - Where does the power go if they cancel?

I have a RF splitter/combiner. I am focusing on the black and red vectors. (Picture attached) 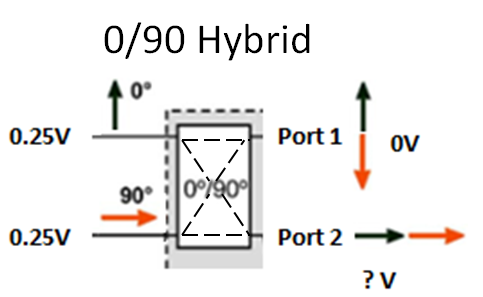 It's not so simple at all. Cancellation and in-phase summing are useful tools to recall what was the output port, but actually the circuit works in more complex way. We can investigate it by simulating. 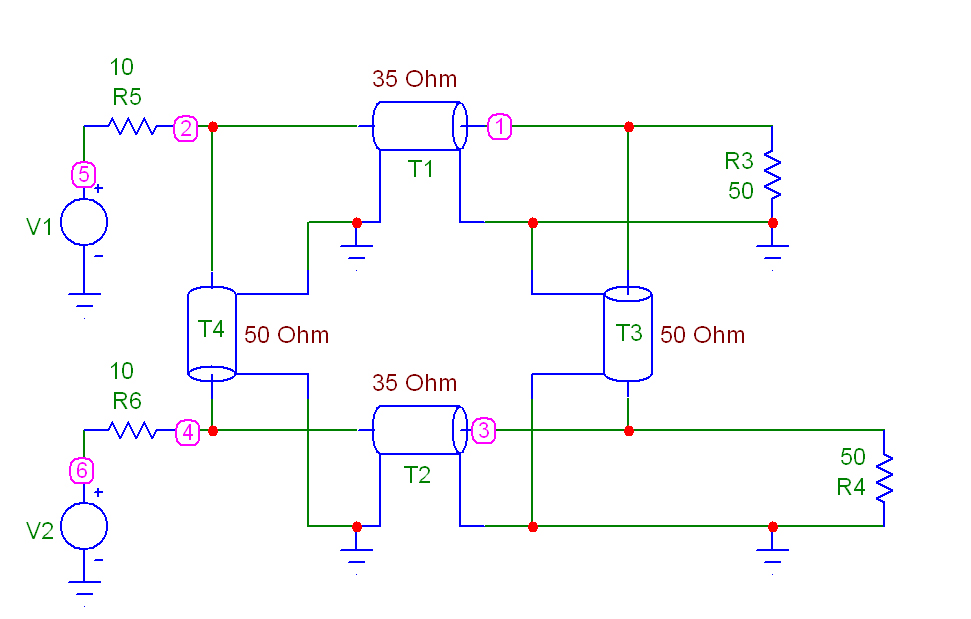 Voltage sources V1 and V2 have both 10V peak voltage and their frequency is 1MHz. Thus the lenght of all transmission lines is the wavelength/4. V2 lags 90 degrees behind V1.

I have inserted 10 ohm resistors to inputs of the hybrid for 2 reasons:

At first we show that the inputs of the hybrid would be perfectly matched to 50 Ohm feeds altough the feeds have now zero lenght and only 10 Ohm impedance. 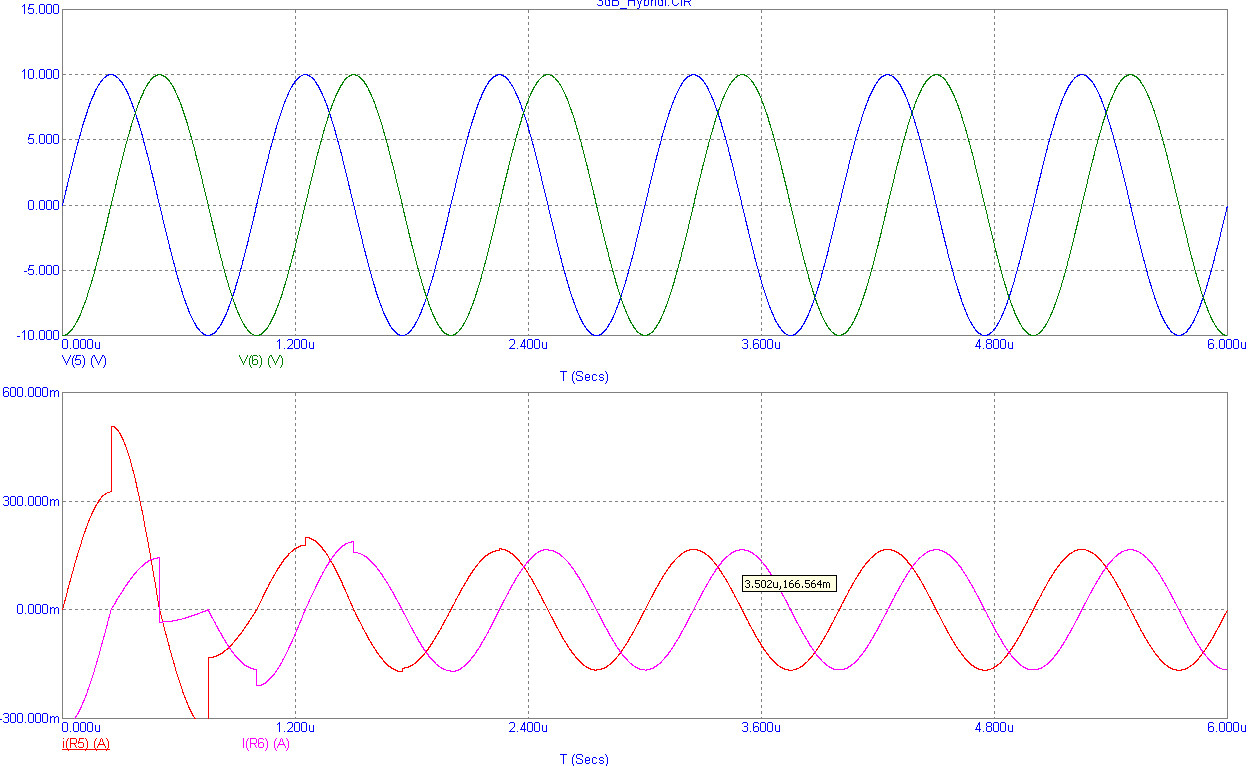 The currents in resistors R5 and R6 are (after the initial transient is dead) perfectly in phase with the signal source voltages. Thus both signal sources have resistive loads. The peak currents are 166,6 mA. That's 10 volts divided by 60 ohms. When the 10 Ohm resistors are subtracted, the remainder is 50 Ohm.

Next we prove that all signal (after the initial transient has died) is outputted only to R4. R3 gets nothing. We want to show that all power goes to R4.

Of course we could plot the voltages and calculate the powers, but as well we can plot the powers directly. It would in addition reveal mismatches, if there were them. 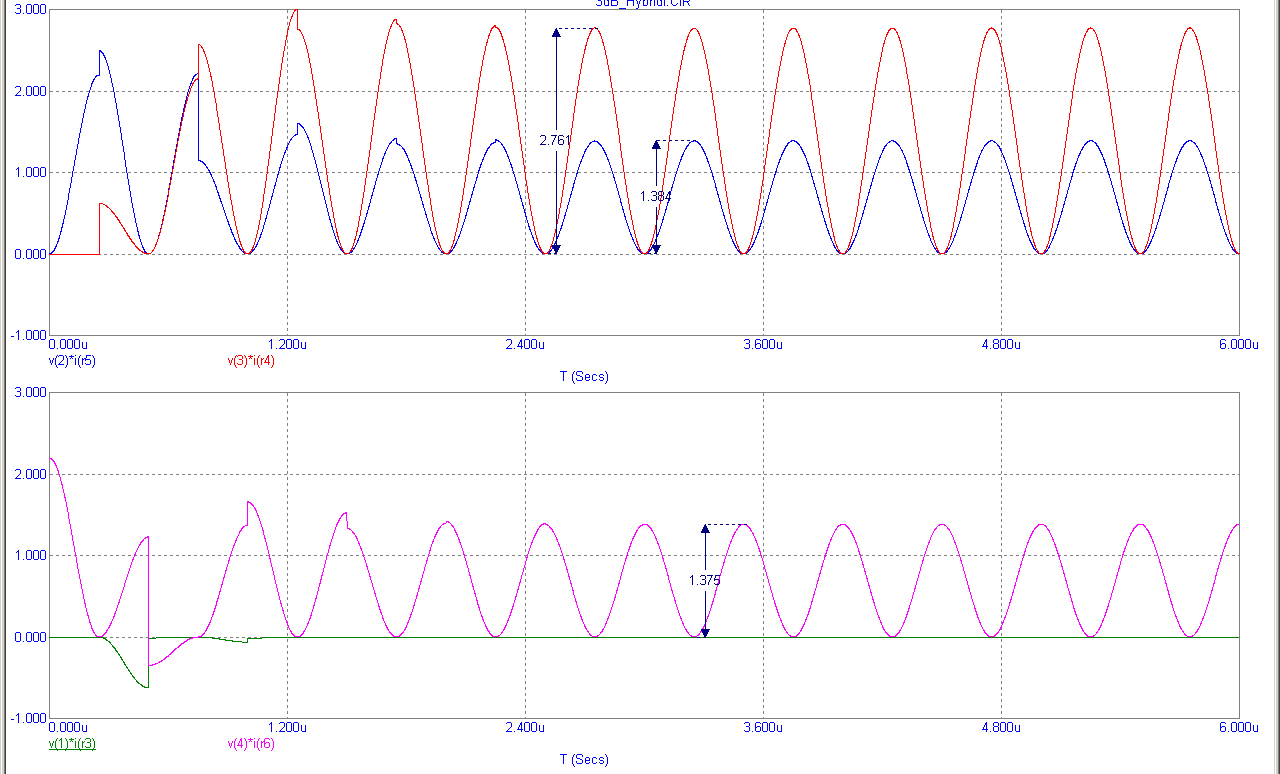 We have plots for the powers that go to loads, R3 get v(1)*i(R3) and R4 gets v(3)*i(R4). The green curve shows that R3 gets nothing after the initial transient has died. R4 gets as much as there's totally inputted to the ports.

The existence of mismatch would be seen as part time negative power. Full reflections would be 50% of time negative. That's only reactive power and as cumulated transported energy it would be zero.

So, nothing is lost, R4 gets all what's inputted, nothing reflects back to signal sources.

A person with the needed math skills obviously could solve the wave equations in the circuit by handling the hybrid as whole and having the inputs and loads as constraints. I must skip it.

The simulator solves the circuit operation numerically, but the system is handled as circuit. T1...T4 are presented as matrices where the wave behaviour is ready to use component data, no wave equations need to be solved during the simulation.

What actually happens to mutually cancelling waves which come to same point from two joined lines?

Answer: Their voltages are summed at the joint but the waves continue their travel. If there happens to be a load just in that point where the lines meet, the load gets nothing, because the sum voltage is zero. It's just like a zero voltage point in a standing wave pattern in case of full reflection.

But how the wave can continue - for ex.those who come up through T3? How they can continue to T1 when the voltage is constantly zero at node 1?

Answer: The wave has 2 components. Electric and magnetic field in the space between the conductors. If the total electric field happens be zero in a point because the the incoming waves cancel each other, the magnetic field will not be cancelled if the waves travel to different directions. The magnetic vectors have different directions. That's enough to allow the wave to continue. Only such summed wave is nonexistent where both electric and magnetic fields are cancelled. You surely have read that a standing wave can have a zero voltage point, but there's a current amplitude maximum in the same place.

We electricians like simplifications which allow us to think currents and voltages and forget those 3D vector fields which are the actual waves. The voltage is the strength of the electric field squeezed to one number and the current in a transmission line is induced by the fields. It's much simpler than the magnetic field in the 3D space. One can follow the waves in a TEM mode transmission lines well with voltage and current (as we have done above).

Not the answer you're looking for? Browse other questions tagged rf passive-components split or ask your own question.

1
Trouble with phase locked loop: phase comparator is just showing the VCO output (with picture)
1
Uneven (10 dB) RF Power Splitter/Combiner
4
GPS splitter with 200Ω DC load and 50Ω RF impedance on all ports
5
MCU clock drift and radio frequency drift - are they the same?
15
Why, in a passive circuit with a sinusoidal input, do all voltages and currents have the same sinusoidal behavior as the input?
4
Does the antenna length differ between transmitter and receiver?
0
AC Power Splitter and Regulator
2
What does the 25 Ω termination resistor do in a 0/180-degree hybrid power splitter?