Electrically detecting a not connected input

I have a 0-30V DC signal and it can be physically disconnected from a circuit. I need to detect and generate a TTL output when this signal is disconnected.

The "detector" circuit and the signal will share a common ground.

The thing I can't figure out is 0V (GND) is also a valid "connected" state for that signal. Using standart approach of a pulldown for detecting unconnected state is not going to work.

Edit: Thanks for all your input. Additional information:

Is there any way to detect this electrically? Thanks

Since you need a TTL signal, I assume you have +5V available. 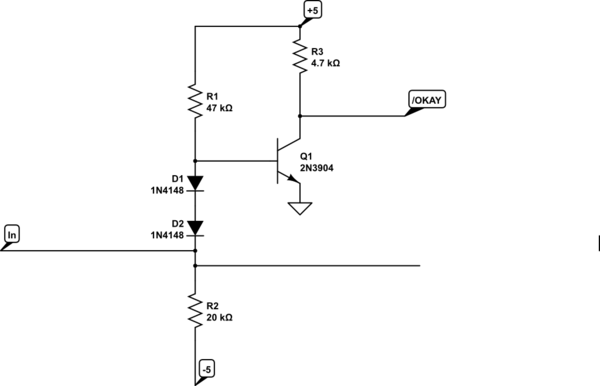 Depending on the impedance of the source and how much you are allowed to load it, you might be able to do something like have the receiving device inject its own time varying signal into its own input through a very large series resistance.

If it sees a corresponding variation in the measurement, then it knows that the source impedance is also high; likely because nothing is connected.

This will mostly easily be done with a system that includes an MCU or is able to run software. But you can easily add one. A 34-cent (in quantity 1) ATtiny10 has an ADC and is available in a SOT23-6 package. Pay the distributor a little more to pre-program it with your code, give it a resistive divider for the input range and a a large output resistor for injection and you should have a solution.

And it is only possible where slight "back contamination" of the source is acceptable, ie, you wouldn't want to do it to a source also feeding other sensitive gear.

If your source is of low-enough impedance, you can pull-to-the middle and have a window-detector to sense the fault condition.

Basically place a pull/up pull/down to a middle voltage (e.g., a resistive divider to 15V) and use a couple of comparators (or transistors) to determine if the signal is around that window, at 0V or at 30V.

Are you allowed to choose a connector? If so, many (if not most) barrel jacks have a third pin for detecting whether the connector is inserted. Alternatively, you could use a connector with a few extra pins and have it short those pins together when inserted.

For the latter option, the following two methods come to mind: In the first, the sending end has two wires going to the connector, and the connector contains two extra contacts that are shorted together. The receiving end can sense when this connector is connected by checking if the two sense pins are shorted. The easiest way would be to tie one to ground and pull the other high on the receiving board.

The second method uses only one extra contact: since you'll most likely sense by shorting it to ground, you can just short it to the signal ground and sense when that connection is made in the same manner. This doesn't provide the isolation that the other method does, though. 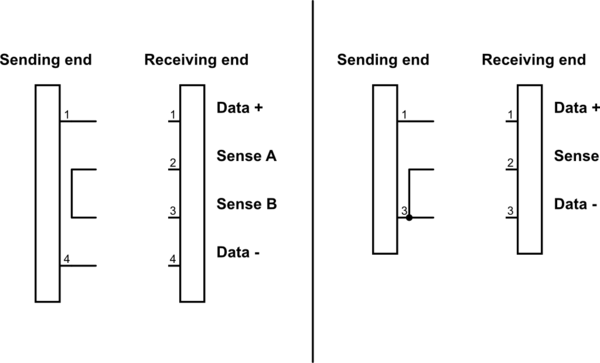 The downside to these is that they only sense if a cable is connected. You could in theory put the short on the sending end board, which would let you know that the sending end is on the other end of the cable, though. It still won't be able to detect every fault condition; the main advantage is simplicity.

I have assumed in this solution that a voltage divider is required to measure your 0-30VDC.

There are really only two conditions that exist.

This circuit would seem to provide what is needed assuming you have an MCU sensing the measured voltage. 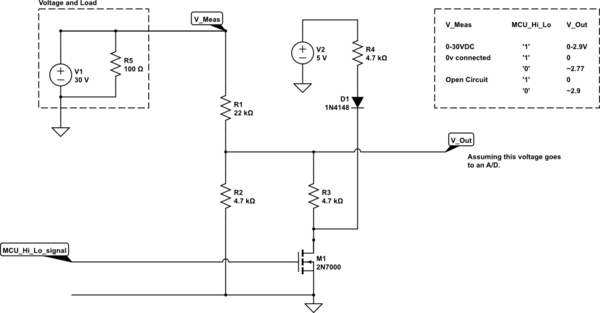 If and only if the input voltage read zero, you can turn off M1 and measure the voltage. If it is ~2.8V then the probe is open circuit. This is enough voltage difference to be sure it is open circuit and requires very little software change.

What about using relays? Put the 30V through the relay coil, input the 5v output of the MCU to the common and the io pin to read into the NO of the relay. When its disconnected it will trigger a high in the io pin

Not the answer you're looking for? Browse other questions tagged detection or ask your own question.