Why are ground pours isolated from each other on the top layer?

I am reading the application note from TI about the LM3409 evaluation board. In the board layout (Figure 3) the bottom layer is a single GND pour.

But top layer has also some copper pours which end up being connected to ground, such as the ones at LED-, C5, D1 and C1.

What I don't understand is: why are they all not connected to each other on the top layer, since they are all the same net ? 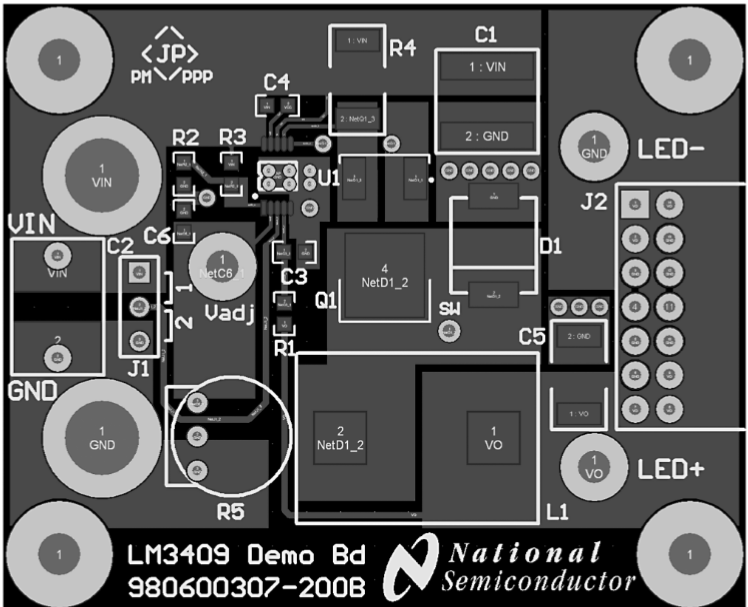 why are they all not connected to each other on the top layer, since they are all the same net ?

Because this is a switching converter. In switching converters very high currents can flow, often these or only very short current pulses. If we "just" connect everything to the ground plane directly it is unclear where these currents actually flow. Yes all is connected but due to resistance of the copper (low but it is always there) and inductance (a wire of 1mm has 1nH inductance, also small but still there) these current peaks can still influence the operation of the circuit.

For example the grounding of the chip must be such that no voltage (or as little as possible) is induced across it otherwise the chip will not have a "clean" ground which will prevent it from regulating the current properly.

So most often a "star ground" scheme is used, read more on that here.

I'm not saying the ground scheme used on this PCB is a star ground but it will be a deliberate choice of the designers to make it like it is. Often the IC's datasheet will also include a recommended PCB layout and that might include a grounding scheme as well.

The reason for that is a switching supply generates high spikes / transients, and the via (and also copper) acts like a small resistor. To have separate ground on the top layer reduce the impact of high transients into the ground plane by keeping the current where we want it on the top plane, and avoid going to some places we don't want it to flow.

Basically, it allows to better control of where the current is flowing on the board. If it was a plain plane on the top, it would be difficult to predict where the current would flow, it may flow near sensitive IC causing unwanted effects.

Are you sure the pour at LED- is ground? Since it's a through-hole component I would expect the GND pins to connect to the bottom layer ground pour, and the top layer pour is probably a power net. Therefore connecting the other top pours to each other may not be as practical as you might think.

I expect this was done to prevent ground loops (a strip of pour on the top layer connected by vias on either end to the bottom ground pour). Keeping point-connections to the primary ground plane/pour is a better practice for PCB routing.

Not the answer you're looking for? Browse other questions tagged pcb-design routing copper-pour or ask your own question.

2
Should I using ground pours to surround high speed lines?
0
Which is the best way to ground the top layer copper pour on a PCB?
0
Is a copper pour redundant on the top layer of a multilayer (>= 4) board with a ground plane?
0
What is the proper placement of VCC and GND copper pours in 4-layer PCB?
5
In a 2 layer PCB with a top layer densely populated, from an EMI & EMC point of view should the ground plane be on top, bottom or both and why?
3
4 layers PCB mixed signal GND review
2
PCB Layout Optimization Regarding VCC and GND
0
Polygon pour on internal signal layer ALTIUM
0
Multiple copper pours in ground plane of a 2 layer board