I am trying to construct an output that is switched on by the inputs to a buffer. The buffer input, in the final design, will be sourced from an Arduino or Raspberry PI. I needed the buffer because it provides more power/current source capacity than without.

I do not think the NTE 4050 buffer is providing much current and am not sure why? There are a couple of items to note… In the attached circuit, when R1 is deleted and the buffer output is left unconnected, the voltage, with respect to ground shows as 1.8 volts on the buffer output.

In the attached circuit, when R1 is switched to 22k, the voltage, with respect to ground, between R1 and the NTE4050 buffer, is maybe 1.7 volts.

In the attached circuit, when R1 is 1k, the voltage, with respect to ground, between R1 and the NTE4050 buffer, is close to .7 volts.
I am not sure why the R1/NPN transistor is overloading the buffer output so much and am not sure how to read the current source capacity from the datasheet? I would figure that there should be a base->emitter voltage drop of .7 volts in the transistor. If so, there should be a 1.1 Volt drop across R1. That should be 1 ma into base input of the transistor. When I measure between R1 and the NTE4050 output, I see about .7 volts. What is going on here?

The buffer is said to have high source and sink current capacity. Once the transistor is switched on with minimal current, I wish to apply a load between GND and OUT in the schematic.
The primary problem relates to my understanding of the datasheet for the 4050 buffer and why it is not easily able to source a couple milliamps? 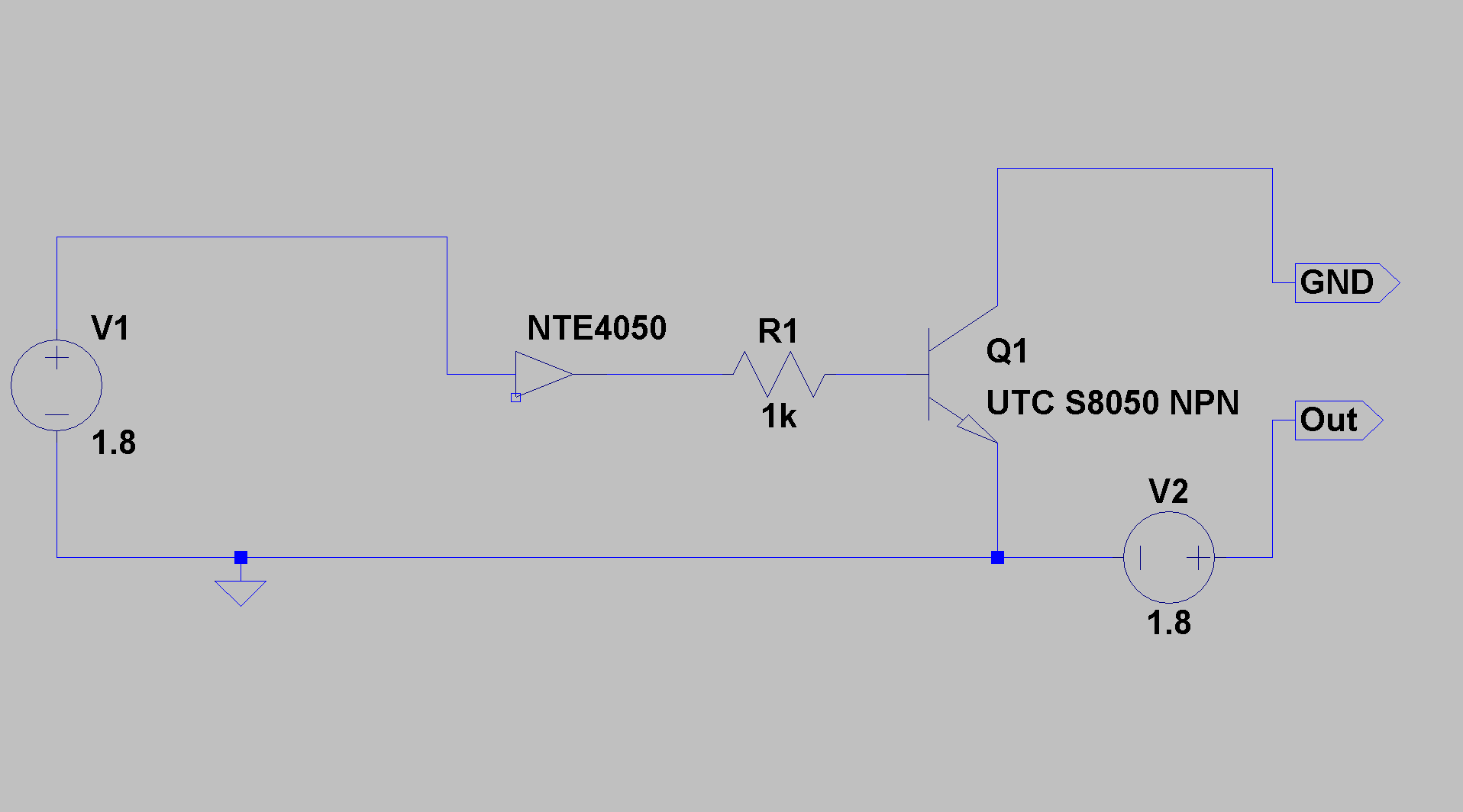 In the data sheet it shows Recommended Operating Conditions for VDD from 3 to 18 volts.

Also shown is the Absolute Maximum Ratings of -0.5 to 20 volts. This means that no damage will result in the range.

Also assure that pin 1 (VDD) and pin 8 (VSS) are connected to the circuit. VSS is connection for ground.

Not the answer you're looking for? Browse other questions tagged circuit-analysis bjt driver datasheet current-source or ask your own question.

1
transistor characteristics - Ube0 number meaning
7
Understanding 74LVC245 datasheet and current source/sink
1
high side variable current source
2
Calculating base current and resistor required from transistor datasheet? Do I need a different transistor?
8
A question about Vce of an NPN BJT in saturation region
1
S8050 BJT is rated for 700 mA but gets extremely hot when powering a 12 volt 700 mA PC fan
1
Getting more current through a BJT
2
Mosfet datasheet reading and power calculation problem
1
Understanding current sourcing and sinking in TL2426 rail splitter