I was not sure what to title this question.

What I have two version of the following circuit, that I have built and modelled.

The application is to create a pulsed magnetic field, by pulsing a current through the coil. 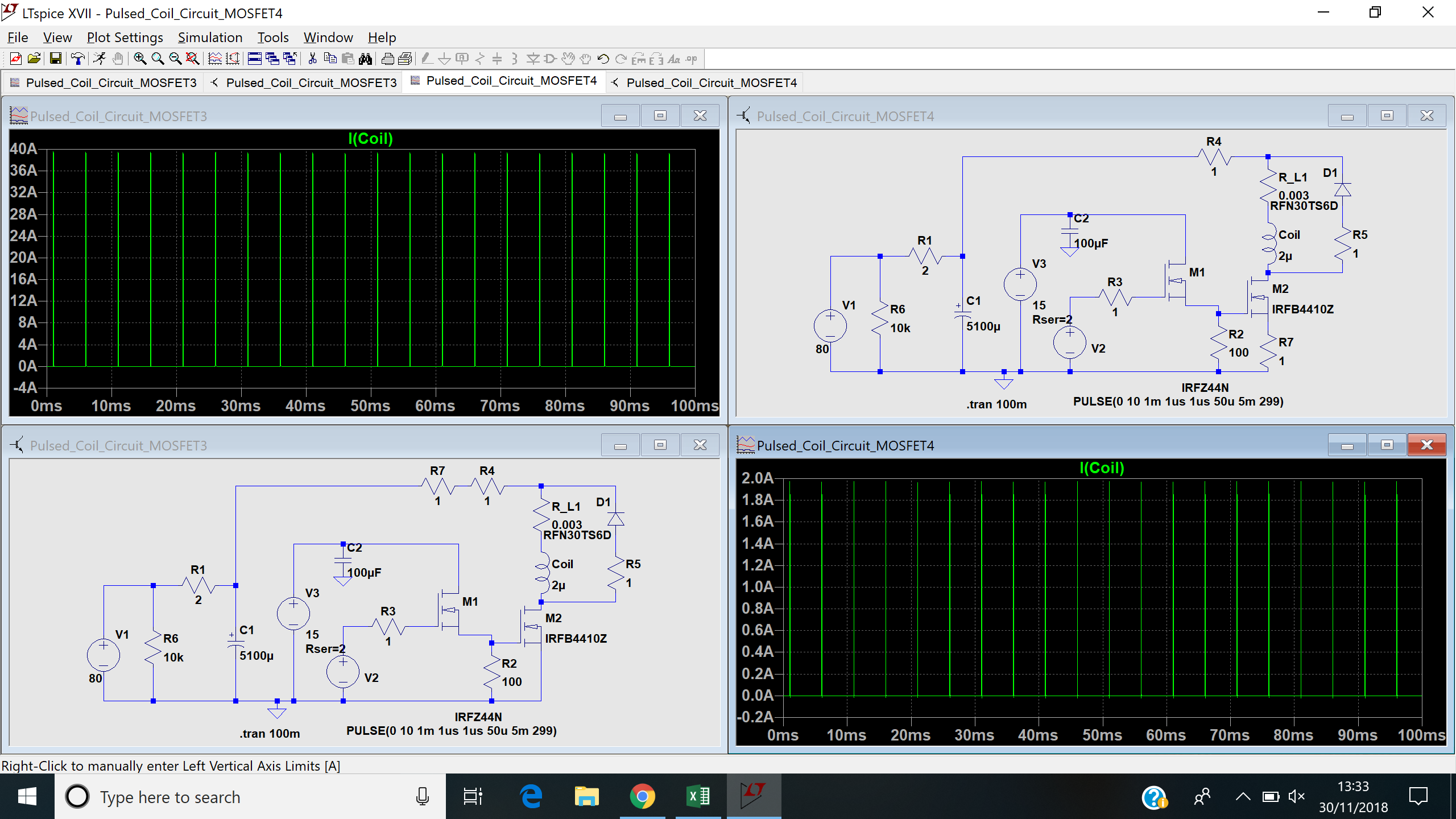 I would like to be able to measure the current through the coil, it was initially suggested to me to move one of the 1 Ohm resistors R7, and then measure the voltage across it, and with V=IR, as R = 1, V = I. This change is represented by the change from the left side diagram to the right side diagram.

While this way to measure the voltage and hence the current does work, I now have a much smaller current through my coil. The general idea was the current limiting resistance of the line would be the same with the resistor moved further down the line, but something else is happening too, and I have not yet been able to figure out exactly what it may be.

I am hoping someone with more experience may be able to offer an explanation as to what is happening.

Additionally, I think my MOSFET, M2, blew in the actually circuit, when I moved R7, I need to pull it out and confirm, but there was a large spark from it while it was running, so I suspect it has gone. I will update when I am sure. I've tried probing the model to figure out what may have happened, but I am still unsure. If someone could make a suggestion as to what occurred based on the circuit, I would appreciate any help.

I do have what I think is a reasonable fix for my current measurement, and that is to put R7 back (left side diagram) and instead add a 1 mOhm resistor to the just after the source of M2, and then the each mV is equal an Amp of current.

I am hoping someone with more experience may be able to offer an explanation as to what is happening.

For the left-hand circuit: -

V2 (the pulse signal) has a peak of 10 volts and feeds a source follower M1. The output from the source might peak at 6 volts (or thereabouts) and this would naturally produce a gate drive to M2 that would reasonably turn it on. Given that M2 doesn't have a source resistor it would be able to deliver a decent drive to the coil of several-to-plenty of amps (device dependent).

The introduction of the 1 ohm resistor: -

This upsets the drive capabilities quite a lot. M2 will produce an output at its source of a few volts when being driven by the 6 volts at the gate and this will limit the current in the drain. I estimate that the source may rise to 2 volts and this of course is across a 1 ohm resistor. The impact is that the peak current delivered to the coil is limited to about 2 amps (2 volts / 1 ohm).

Look at what the voltage across the 1 ohm resistor would be if you had 40 amps current flowing. It would be 40 volts. M2 won't be able to turn on fully unless you supplied 50 volts to M2 gate and ground.

As it is, M2 is turning on a little and thus you are getting the 2 amps.

Your idea of moving R7 back, and placing a smaller resistor in series with the source is a good idea.

Not the answer you're looking for? Browse other questions tagged mosfet circuit-analysis circuit-design or ask your own question.