Is the circuit in this answer wrong?

In the Q/A link below, the circuit in the answer seems to be wrong to me.

Answer to "How to gradually light up an LED?" 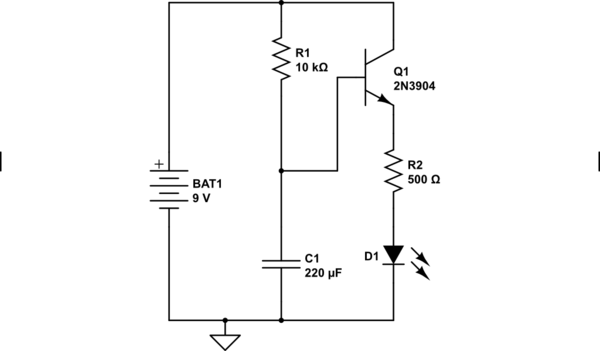 Before going further, there is something else to consider. If you disconnect the power source from this \$R_1\$ and \$C_1\$ pair then in theory nothing much changes, even after time has passed. The capacitor holds its charge (and voltage) and just sits there. (Leakage occurs. But it can take a while.) This might be desirable. But it's probably not in this case because once the power is disconnected it's almost always desired to have the circuit reset itself so that turning the power back on results in the same behavior as before. One possible cheap approach would be to add a resistor in parallel to the capacitor to encourage it to discharge more quickly when the power is removed.

Collector current with BJT as emitter-follower

So what happens when you add an NPN BJT in this configuration, with its base connected to the RC junction node? 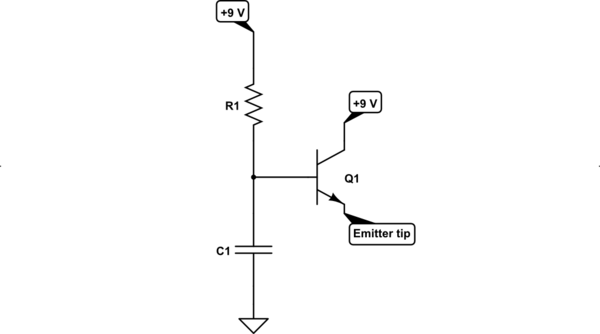 The emitter tip will follow and will be about one diode drop below the capacitor voltage (relative to ground.) At first, this means that the BJT is completely off since the capacitor's voltage starts out well below the diode drop needed by the BJT to turn on. But it's not a lot of time. In this case, considering a \$9\:\text{V}\$ supply rail and the approximate figure of \$750\:\text{mV}\$ for the base-emitter diode drop at a peak LED current of \$20\:\text{mA}\$, it's only about 8.7% of one \$\tau\$. (You can work this out by solving the \$V_C\$ equation for time.)

If you place a resistor between the emitter and ground: 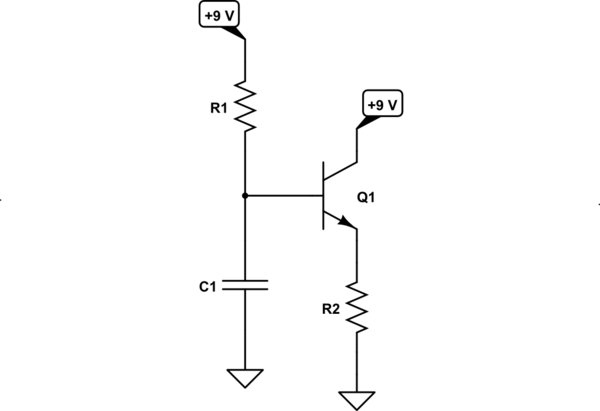 The usual minimum diode drop will be about \$600\:\text{mV}\$. So prior to about 7% of one \$\tau\$ the BJT will be entirely off. Between the time of 7% and 8.7% of \$\tau\$, the transistor will see its base-emitter diode drop increase from about \$600\:\text{mV}\$ to \$750\:\text{mV}\$ (assuming that \$R_2\$ is selected to top out at about \$I_C\approx 20\:\text{mA}\$.) This short transition period isn't terribly important to know in detail. It's enough to realize that the collector current will start just a little earlier than expected, but will quickly just "follow" or "track" the rising voltage at the capacitor. Before the needed base-emitter diode voltage drop, this collector current will be close to zero. Afterwards, it will closely follow the above estimated \$I_C\left(t\right)\$ behavior.

It's convenient at this point to add an LED into the collector leg: 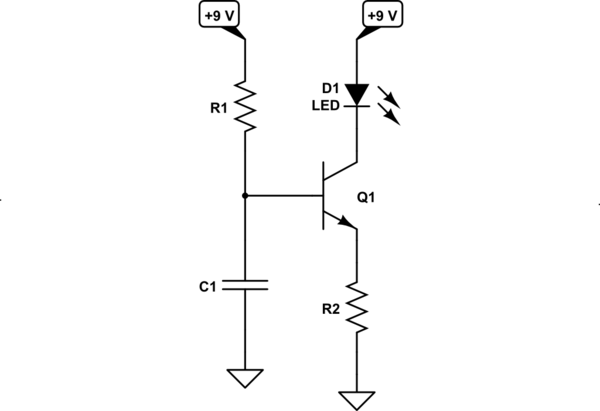 With that handled, the LED will experience the collector current as indicated by the \$I_C\left(t\right)\$ equation. This will be an exponentially rising result, which is good because the human eye has a logarithmic response to current in the LED as "perceived brightness." This makes the perception of brightness seem "linear" to the eye. Which is probably desired.

What about your circuit example?

In your case, the LED isn't in the collector leg but instead in the emitter leg. The effect here is that no LED current (or collector current) takes place until the capacitor voltage reaches at least the BJT's base-emitter voltage drop plus also the required voltage drop for the LED. This is a higher voltage, obviously. So it delays the onset to about 35% of \$\tau\$ instead of the earlier onset I indicated before.

It's otherwise not a lot different.

The actual values of the resistors and capacitor will vary a little depending on your choice (my original topology or the one you selected in your question.) But the basic ideas aren't much different. Just the calculations vary somewhat. Either approach works.

Either way you go, the result should be a circuit that really does cause the LED current to vary in such a way that it will appear to be rising (to the human eye) approximately linearly. And counter to your thoughts, it really should work okay.

The only issue will be discharging \$C_1\$ so that the circuit can be re-started fairly quickly when the power is removed and then re-applied. Here, there are a number of various options to consider varying from very simple by using a resistor across \$C_1\$, but requiring substantial discharging time, to more complex methods requiring more parts but providing a much faster discharge time.

No, the transistor is not immediately on, because the capacitor holds the base at zero volts until it charges up through R1, the 10k resistor.

Nothing happens until the capacitor reaches about 650 mV, at which point the transistor begins to conduct. The transistor functions as an emitter follower, so this is the point at which the emitter voltage begins to rise.

However, even then, the LED doesn't light up (no current flows) until the emitter voltage reaches the LED forward voltage value. From this point on, the current increases in proportion to the change in voltage, as determined by R2.

Not the answer you're looking for? Browse other questions tagged led bjt timer or ask your own question.

4
How to gradually light up an LED

2
LEDs driver circuit
1
Charge battery through the transistor
3
Why does this simple circuit oscillate? (Ekasi oscillator)
0
How to Convert NPN to PNP transistor?
1
What's wrong with my basic light/dark detection circuit
0
Making a light detector using a phototransistor and an open drain comparator
3
Why isn't the D2 LED ON when the transistor is ON?