I am looking into using an SPV1040 boost converter to charge a battery from a solar cell. The chip includes inputs for a current sense resistor, which are described in one of ST's applications notes 1. Here is a screenshot of the relevant section: 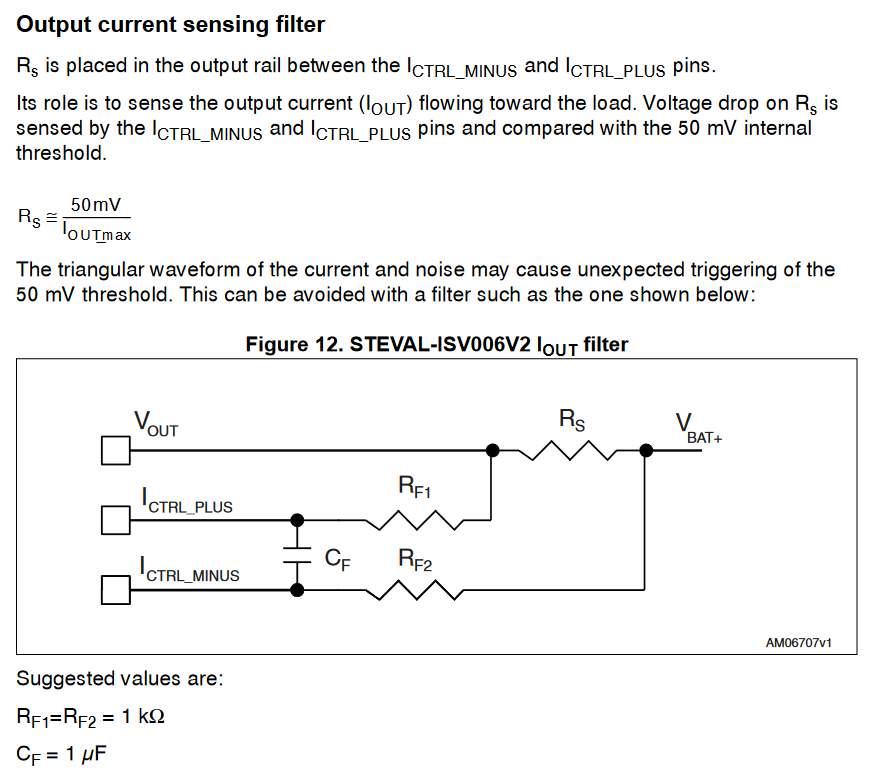 It looks simple: Rs = 0.05 / Imax. But the reference design uses a 10mΩ current sense resistor, and this part's maximum current output is 1.8A. Wouldn't a 0.01Ω resistor mean a maximum current of 5A, following the above equation?

Also, if I'm planning to use a small solar cell which is unlikely to ever produce 350mA @ ~4.1V, can I replace this sense resistor with a 0Ω jumper? And if I did that, could I also drop the filtering resistors/capacitor without worrying about noise from the power supply?

I believe I understand where your confusion is from. The device limits its max inductor current to 1.8A. Then why on the world did the reference design protect it from sourcing out 5A?

I will answer your question and clear the confusions in 3 sections:

If you read the schematic and app note carefully, you will notice that the 5A and the 1.8A are NOT the same current. The 5A is the battery's max current. i.e. the load current: current flow from Cout1 to the load. (e.g. the battery you want to charge) The 1.8A is the inductor current limit. i.e. the upper PMOS current limit.

Is it possible the load current is higher than the inductor current? Yes, if the circuit is in transient. Consider the example here:

At time t0, there is no load, the SMPS is in steady state, regulated at 5V. average inductor current =~ 0A. Load current = 0A.

If this 10A is sensed by the current sensing resistor Rs1, the SMPS's lower FET will stop at once, and not switching again until this current is less than 5A.

Once the load current drops to lower than 5A, the regulator will switch again. At that time, the 1.8A limit will kick in and essentially making the voltage loop to a current loop until the transient is over.

If you want to limit your max charging current to 350mA, then yes, use 143mohm, though I wonder that's a standard resistor value. You will most likely use something close, e.g. 150mohm. On the other hand, what max current should you use depends on your battery. Hopefully you can find it on your battery's documentations.

Maybe yes, but I don't recommend.

There are a few reasons:

I hope that answers your questions.

Not the answer you're looking for? Browse other questions tagged battery-charging switch-mode-power-supply ohms-law current-sensing or ask your own question.

10
How to autoregulate a TP4056 for maximum solar power extraction
1
Charging NiMH batteries with 1W solar panel, charge controller needed?
1
Solar Panel Charging with Arduino
2
Is it possible and safe to charge a NiMH battery with this circuit?
2
solar panel MPPT and battery charging
0
Design a Li-Po battery charger with small solar panel and charger controller with embedded MPPT
0
CN3722 charging issue
2
How to hack to limit output power of a regular SMPS?