How do you close a switch on a high-voltage network?

This is something I've been curious about for a long time. Let's say you're a utility trying to connect two segments of a distribution grid. Both segments will have about the same frequency, because they are both connected to the transmission grid, but the phase angles of their voltages aren't necessarily related to each other. I always assumed the procedure involved adjusting generators on one or both sides to bring those phase angles as near alignment as possible and then closing the switch.

A common AC distribution voltage in the U.S. is 7.2kV line-to-ground, though. That seems pretty unforgiving when you're trying to close a switch. If your synchronization procedure is off by even a tiny amount, you're going to see massive amounts of current flow.

Just to put some back-of-the-envelope numbers to it, let's say your synchronizing procedure is accurate to about 0.5%; maybe you're closing slightly out of phase or there is some small error in your sensors. That's still 36V across the switch, which we'll say has an impedance of 0.1 ohms. Now suddenly we have 360A at 7.2kV for 2.5MW. I know that's a transient current and both sides will get yanked into voltage agreement with each other, but that still seems like a lot! And that's not to mention that some networks are run at much higher voltages than 7.2kV. Is this just something utility switching equipment is built to handle, or are my estimated numbers off? 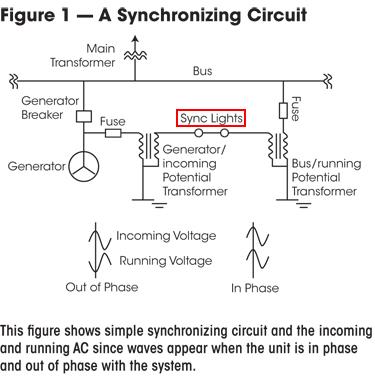 Picture taken from this very good article and I would recommend reading it for more detail. It is a simple line diagram and there are components not shown that will alleviate the connection should any small amount of non-synchronous voltage be present.

I'm no expert on this but I would consider the following to be relevant to achieve synchronization with as little disturbance as possible: -

I'm not expert so maybe someone else can shed more detail.

Not the answer you're looking for? Browse other questions tagged switches power-engineering distribution-network or ask your own question.