RL Circuit Analysis with 2 sources, how to find current of resistor?

I've been tackling some problems related to natural and step responses for RL & RC circuits, but I think I've hit a major roadblock for this RL circuit. I'm trying to find the time constant and current i3(t). While I'm certain that this type of circuit is first-order, I'm honestly stumped as to how the inductor, voltage source, and the current source change (or stay the same) for t<0, t=0, and t>0 conditions.

I'm certain that the equivalent resistance, Req, will be required for the time constant, so I attempted to do superposition (removing sources) at t=0 in order to find Req, knowing that it is relative to the way it is viewed from the inductor. Upon redrawing the circuit diagram (for t=0) and using thevenin theorem to solve for Req, I ended up with Req = 1.59 ohms. I'm not 100% certain whether this is correct, but I found that R3 is || to the series combination of (R4 + R5), followed by adding R2 to that result, then making that parallel to R1, leading to 1.59 ohms. 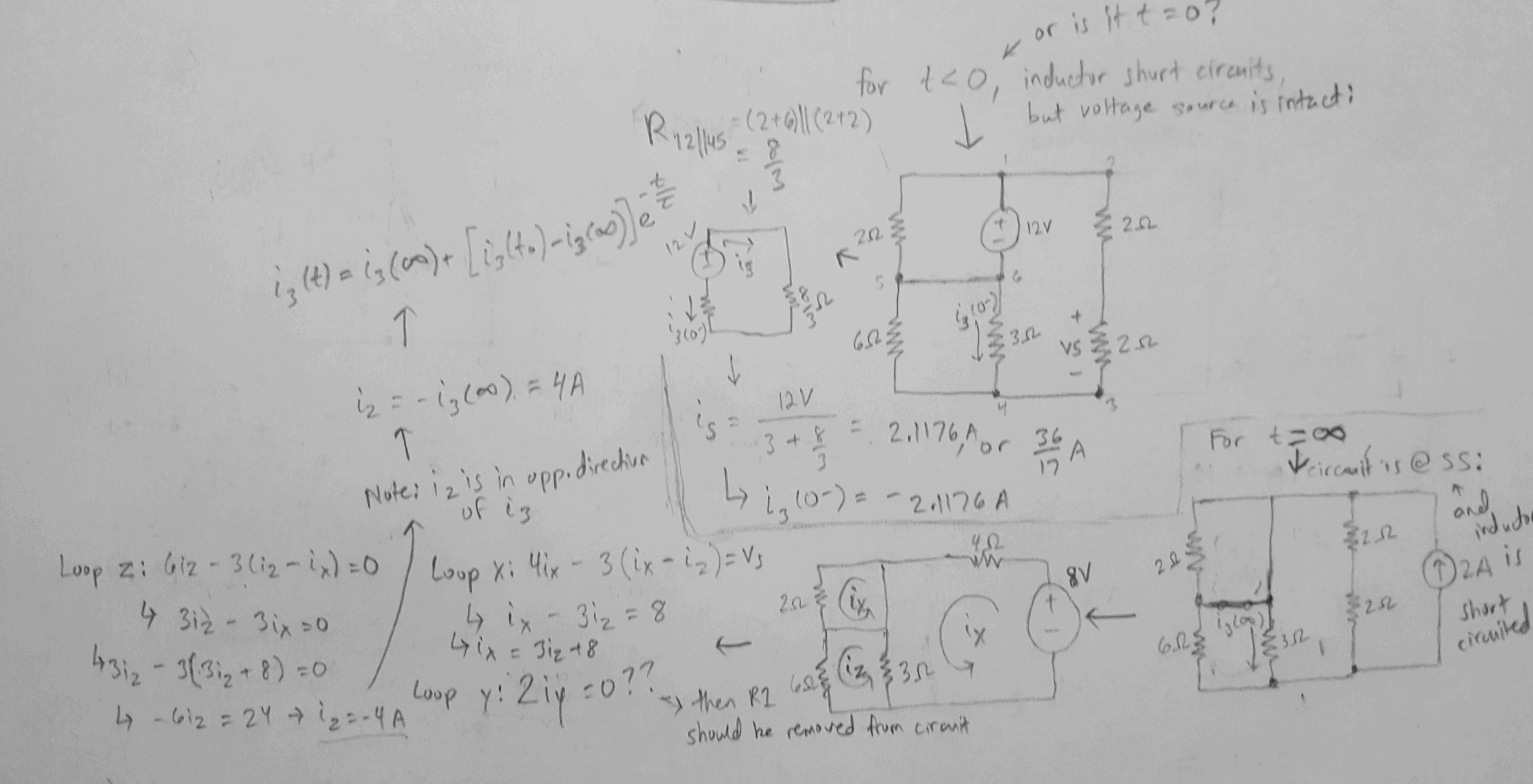 However, what I'm puzzled about is how to solve for the current i3(t) across the R3 resistor. My way of thinking tells me that i3(t) includes the steady states for both i3(t=0) and i3(t= infinity), in which the first one is found by having the voltage source intact (and all of the resistors too), but the inductor does short circuit at t<0 (right?). i3(t=infinity) should be able to be found for by short circuiting the inductor, replacing the voltage source with a wire, and having the current source remain intact. I have a good feeling that this is one way to find i3(t), as the general equation for it is:

Are there perhaps potential gaps I have in my approach of solving for i3(t<0) and i3(t)?

7
Voltage and current calculations, Resistor and inductor in parallel
3
How to do Mesh Analysis with Current Sources?
0
Steady-State DC Analysis: Inductors and voltage sources
1
Current analysis with 2 voltage sources
0
Voltage Divider with two current sources
0
How to find voltage across resistors with only current sources?
0
Finding total energy for RC discharged capacitor at t = ∞?
0
How to find voltage across resistors in RC Circuit with 2 voltage sources?
0
Find the transfer function of the circuit if current I is the measured output