Most Rc circuits are not as severely difficult as this kind of circuit. I'm trying to solve for both the time constant and the voltage V2 across the R2 resistor, both of which will hold the necessary values needed to find the total energy for the capacitor. 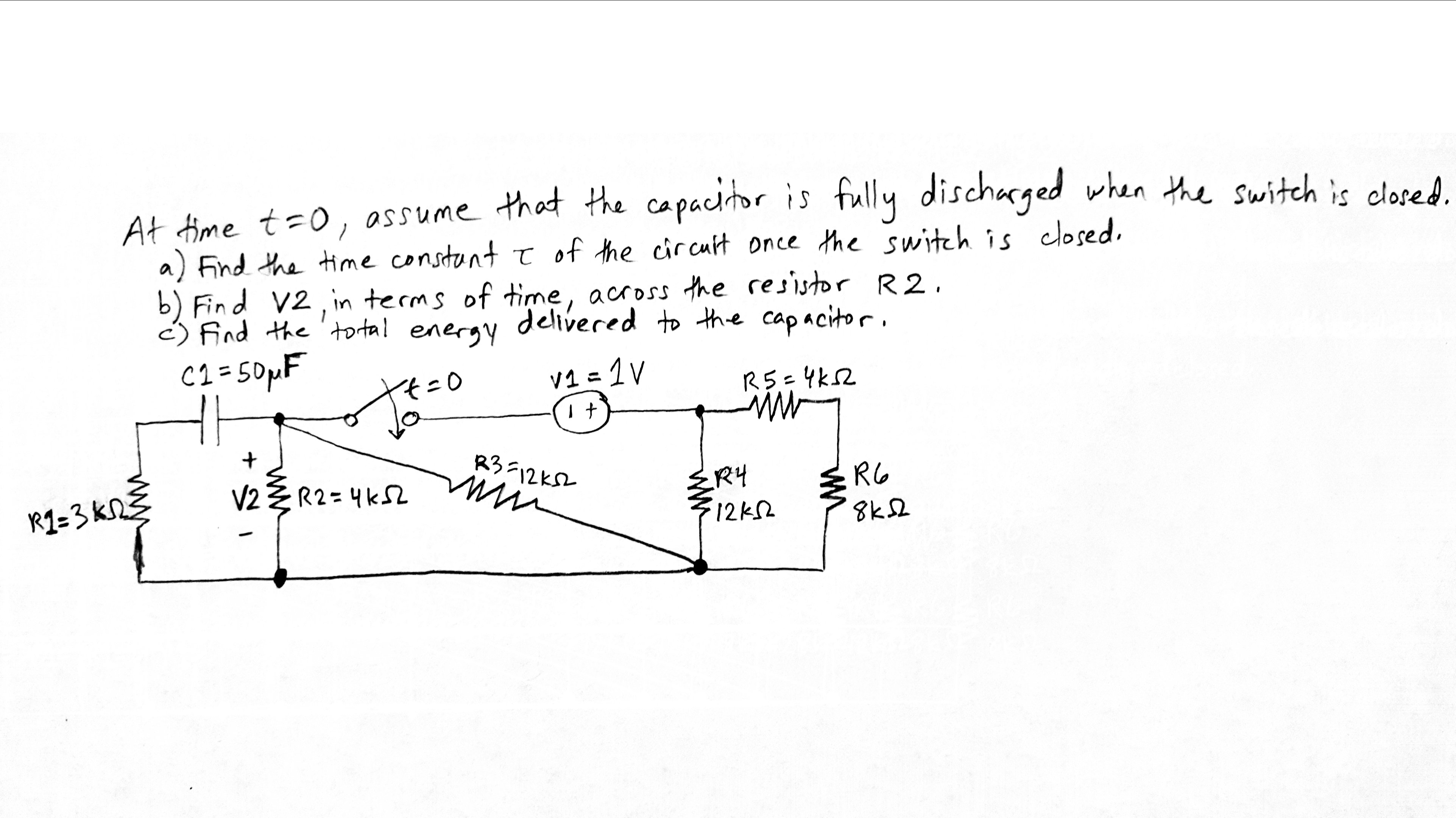 However, despite knowing that the time constant is RC, I'm uncertain as to whether I ended up with the right equivalent resistance, Req, that's used to find the time constant. I was under the assumption that with the modified approach I took to find Req, it came out to be 5000 ohms, leading to a time constant of 25 ms. I'm almost certain this part is done right.

For (b), I understood that because a discharging capacitor is involved, the initial voltage for the capacitor would be zero: vc(0-) = 0, such that it would equal vc(t=0), based on the given assumption. Unfortunately, beyond this, I am stuck on where to proceed next in finding vc(0+), V0 (initial voltage) and other key variables needed to solve for V2. My instinct tells me that finding the voltage across the capacitor, Vc(t) is likely to be needed for (c), but I could be wrong about that. For an RC circuit with a discharged capacitor, I am still confused as to how to approach this circuit. And then there is finding the total energy of the capacitor, which I believe is dependent on the voltage across capacitor too?

Apply a sanity check, the cap is in series with a resistor R1, so Req clearly cannot be less then the 3k series resistance....

I would start by rolling R4,5,6 up into one resistor, and then combining R2,3 into a single resistor, just to simplify the thing (Resistors in series and parallel).

Hint, once you have that little series network, solve for current then calculate the relevant voltage.

Not the answer you're looking for? Browse other questions tagged voltage capacitor circuit-analysis resistors switches or ask your own question.

12
Voltage across capacitor
2
Finding the Time Constant (Tau) of a 2+ Capacitor RC circuit
0
Calculating an First Order RC Circuit Time Constant
1
RC circuit with pulse input voltage; finding the time constants
0
How to find voltage across resistors in RC Circuit with 2 voltage sources?
0
How to find the voltage of a capacitor in a Op-amp + RC network?
0
How much energy is stored in the capacitor after 18us?