So I stumbled across a rather strange ideal op-amp circuit that I've never encountered before. I've done enough problems regarding inverting amplifiers, non-inverting, summing, difference, and such, but I haven't done one that involves two amplifiers together. The problem asked to find both Vo and V4, so I figured that perhaps doing one amplifier at a time would help. 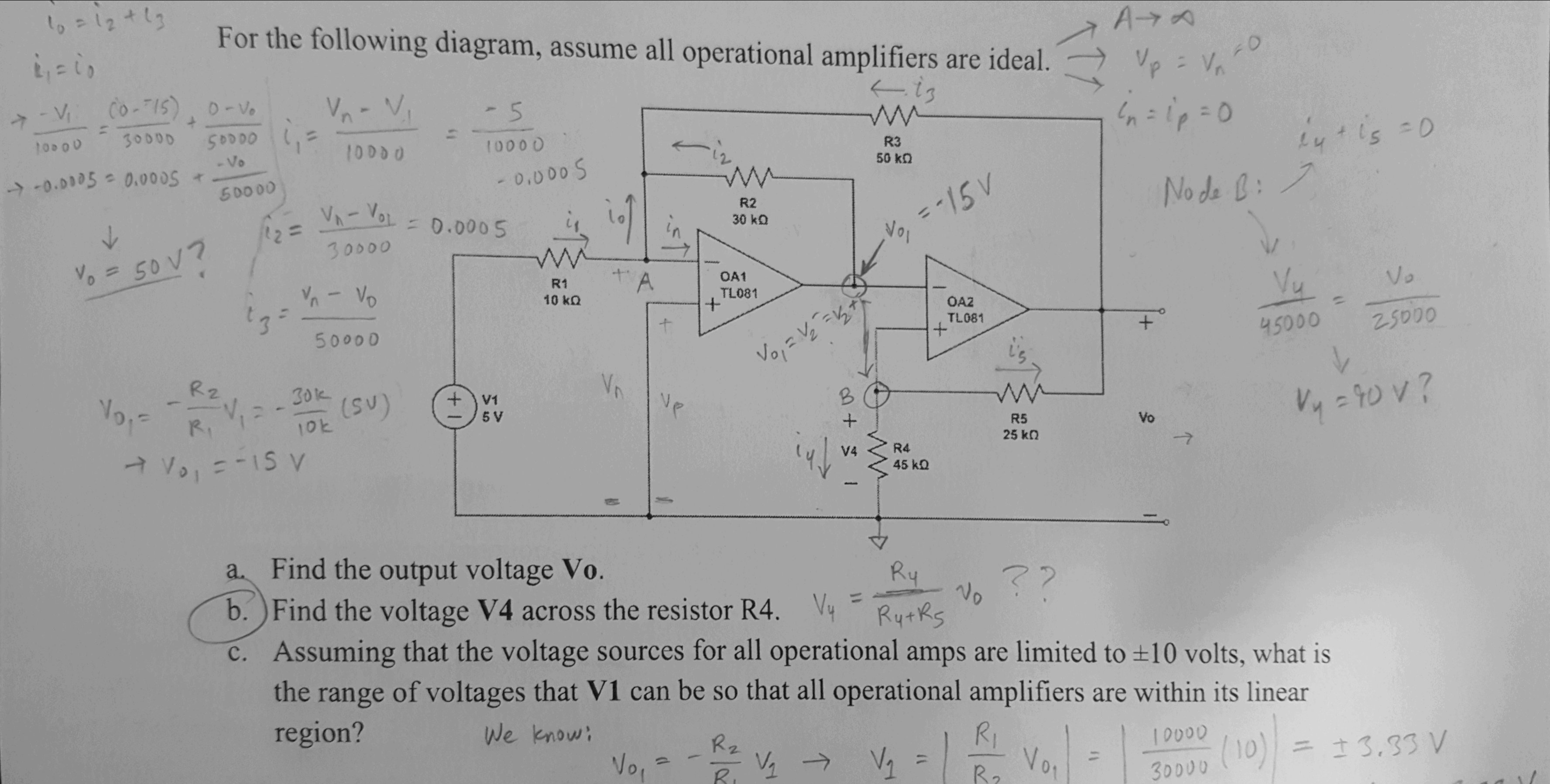 Assuming that the voltage difference between the inputs for both inverting and non-inverting terminals was negligible, I framed the left inverting amplifier to include V1, R1, R2, and R3. I attempted at finding the output voltage v_o1, at the end of the left amplifier, through the formula *v_o1 = -(R2/R1)V1, which ended up as -15 V.

However, when attempting to find Vo, I encountered the first roadblock: I know that since the current going into the inverting terminal is zero, i1 = i2 + i3. By using the node-voltage method with this, I identified i2 = (0 - v_o1)/R2 and i3 = (0 -Vo)/R3. This is where I'm unsure if this is all correct. I presumed that the i2 and i3 branches that stemmed off from the node is equal to i1, but could I be wrong about this? I ended up with Vo = 50 V, but I don't fully know whether this is right, or if I'm missing some passive sign somewhere.

As for (b) on finding V4 across the resistor, I think I may had solved this incorrectly. Switching to the second amplifier at the right I assumed that, because we're dealing with ideal amplifiers, the currents from the inverting/non-inverting terminals are zero, such that i4 + i5 = 0. However, considering that Vo might not be correct, I went with my result and ended up with V4 = 90 V. I'm also worried about this because instead of including the whole two amplifiers together, I'm only focusing on one at a time for each part, and that I might very well be missing key variables to include, such as v_o1. Am I wrong in saying this? It would be much appreciated if anyone can provide some insight or advice on this tricky two-stage amplifier circuit. King Regards 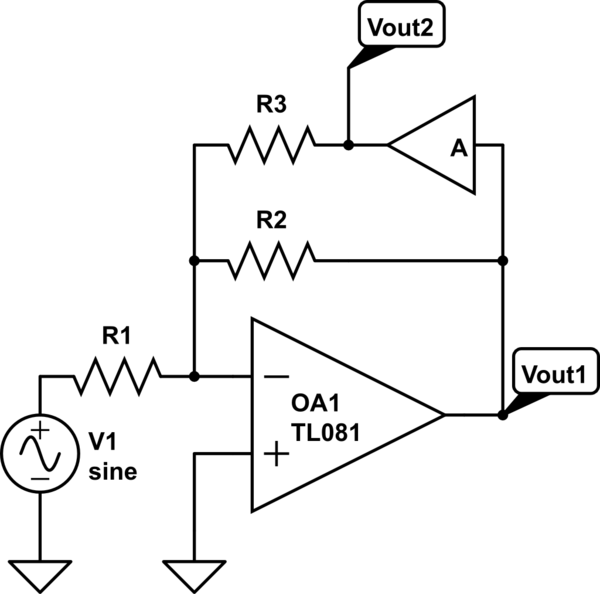 The schematic shows how the whole circuit should/could be interpreted. Of course, I have assumed that the second opamp is used as a non-inv. amplifier (gain A). Only in this case, the circuit can be used as a linear amplifier.

Regarding the output Vout1 it can be treated as a classical inverting configuration. For gain calculation you can set Vn to zero (Vn is the voltage at the inv. terminal). Because this voltage is produced from two voltage sources (V1 and Vout1) you have to use superposition rules Vn=Vn1+Vn2 (Vn1 caused by V1 with Vout1=0 and Vn2 caused by Vout1 with V1=0)

Realizing that R3 enters the feedback path with a value reduced by the factor A (because the current through R3 is A times larger if compared with R2), you immediately can write down the result (making use of the well-known inverter formula):

Not the answer you're looking for? Browse other questions tagged voltage circuit-analysis amplifier resistors inverting-amplifier or ask your own question.

1
Inverting or Differential Amplifier? (Or neither?)
2
Questions on Operational Amplifiers
7
Opamp Inverting Amplifier: The case of non-inverting input not being connected to ground
2
Inverting op-amp gain
1
Why does an diff-amp being fed by two separate op-amps with low input resistances distort the signal on the inverting input?
0
In inverting amplifiers, isn't the virtual earth approximation only valid for extremely high gains?
1
Resistor Between Voltage Reference and + Input of Op-Amp? Why?
3
Basic Ideal Op Amp Circuit Analysis