I am trying to work with a Microchip MCP2515 CAN Controller (16 MHz oscillator) alongside a MCP2551/61 CAN transceiver. I have been successful trying to setup the device via SPI, but I am unable to send/receive CAN frames (trying to send throws a large count of error frames, increasing the register error counter and making the interface go error-passive and bus-off).

I suspect the reason of these errors is the bit-timing although I am not so sure about it.

Does the CAN bit timing for each device affect only receiving, or both receiving and transmitting? 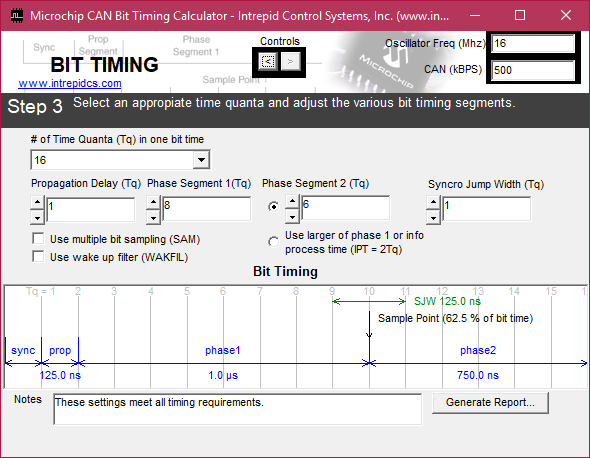 Update: I just figured out why the controller was not working... The MCP2551 transceiver was dead... I replaced it, and it worked all of a sudden.

With CAN, the timing scheme is important for both transmitting and receiving.

Without knowing the exact setup of your bus it is difficult to say exactly what is going wrong. That being said I would suggest increasing propagation delay to 3, leave phase 1 at 8, decrease phase 2 to 4 and increase the SJW to 4.

62.5% is kind of early to sample. 70% to 80% tends to be more realistic. The suggested setting I have given here is 75%. Also widening the SJW will give the module more leeway in adjusting where the sampling point is. Every time the bus resyncs (at least once every 10 bits) the SJW allows the sampling point to move in compensation to where the rising edge of a dominant bit falls. This can help with a jittery or leading/lagging clock.

The bit timing is important for both sender and receiver: each sender also samples the bus while transmitting.

For example during the arbitration phase, it needs to know if a higher priority message is also being transmitted and that it should therefore drop it's transmission.

Also, at the end of the message, it needs to check the ACK bit.

Not the answer you're looking for? Browse other questions tagged can bit-rate or ask your own question.

2
Debugging a LPC23XX based CAN bus sniffer
5
CAN bus bit timing with 16 MHz crystal
2
MCP2515, CAN bus, and transmission failure
1
Why CAN controller is causing fault codes
3
Simple CAN bus design, communication issues
2
Interfacing with a truck's internal CAN bus system
0
CAN communication between mcp2551 & tja1050 transceivers
1
CAN bus appears to have a collision in the middle of transmission