What is the mechanism that causes two conductors to “stick together” when a current is passed?

If the positive and negative terminals of certain DC supplies are brought together under certain conditions, the wires will "stick together" with a slight force, feeling almost like they are magnetically attracted. The force is perhaps only slightly stronger than the weight of a paper clip, but it's obvious if the two wires are hanging freely when they are pulled apart.

This effect can be easily reproduced with a bench supply. 12V and a current limit of about 2A will do. I get good results with alligator or banana clips. Even 12V with a current limit of 100mA seems to be enough. The issue here is the response time of the supply, which is another variable. Perhaps 100mA is meaningless in this case, because upon contact, a much larger current has already passed? If I try 3V and 4A, the effect seems weaker.

I assume this is the same phenomenon that causes broken filaments in incandescent bulbs to re-stick once contact is made. When conventional car headlights "burn out", often the filament is left dangling and can be temporarily restored by banging on the headlight or slamming the hood. The headlight may then work until car shuts off, or even days after.

I also assume this is the same phenomenon that damages relays that close under high loads.

What is the mechanism behind this? 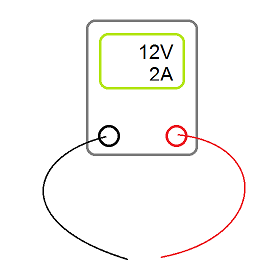 I am doubting magnetism. My guess is micro-arcing (welding).

What is the mechanism behind this?

The point of contact between the two leads has a significantly higher resistance than the wires themselves, or their connection to the power supply. Passing a current through this circuit will cause heat to be generated at that point of contact, melting some of the metal around that point and causing the leads to stick to each other.

If you're using an inexpensive bench power supply, I wouldn't be surprised at all if its current limiting were not responding fast enough to a sudden short like this. The actual current that flows when the leads first make contact may be significantly higher than the set limit -- depending on the exact architecture of your PSU, it's possible that its output smoothing capacitors are being discharged directly into your test leads, bypassing current limiting entirely.

The aligned magnetic fields of closely spaced wires serve to draw them together, but only if the currents are running in the same direction. In the case of a loop, where the current is running one direction in one wire and the other direction in the other, that force will push them apart. The amount of force you're describing sounds about right.

This is not how incandescent bulbs "self-heal." In that case, the loose, unconnected filament is disturbed mechanically, and if it closes the circuit, the resulting momentary arc can "weld" the filament back together. It doesn't last long, though, since that weld is generally now the weak spot on the filament.

Not the answer you're looking for? Browse other questions tagged current electromagnetism wire physics or ask your own question.

7
What mechanism happens inside a resistor for potential drop and constant current?
1
What mechanism happens inside an inductor from the point when potential difference is applied?
1
What happened when I join two different materials?
3
A material that gets tough when current is passed through it and becomes soft when current is stopped?
10
How does a non contact voltage tester work?
0
What do you call a cable that has string along with its conductors?
12
If one sends short bursts of electric current that abruptly turn on and off, why does the receiver receive a smoothed-out current?
0
What causes the residual magnetic flux when the current is zero in an inductor hysteresis curve?
0
Is it logically explainable that current is lower when torque higher?