How to understand an ultrasonic sensor datasheet?

I'm trying to model the ultrasonic sensor for a simulation and I need to somehow express in what angles and distances the object will be detected by the sensor.

What does sensitivity mean? It is set in dB values. I thought it is the amount of attenuation at which the sensor can still detect the object, but that would mean the lower number, the better, and the picture below shows that for the chosen frequency 40 kHz the sensitivity is around -75 dB, while other frequencies go to -95 dB. So what does this property mean and how should I understand the graph? 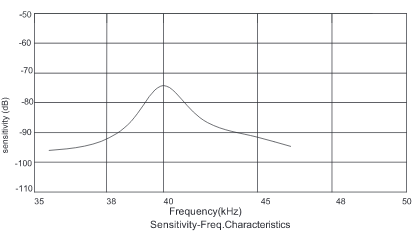 Another thing I can't figure out is the radiation graph (or directivity graph, if they are the same. They look the same, so I have no idea.) Examples of those graphs are shown below. 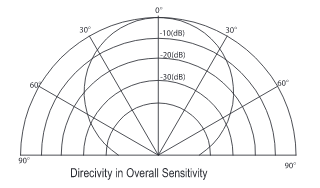 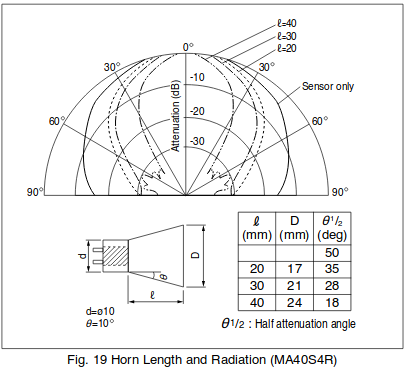 What does the line represent? I'm thinking it's some kind of contour connecting the distances in all the angles which has something same. Maybe the attenuation or the Sound Pressure Level. But those graphs never state any specific value related to the line.

where \$\alpha\$ is the attenuation. Now this SPL is in dB, so I thought I could directly compare it to the sensitivity and get the result. If \$SPL > \text{sensitivity}\$ then the sensor can detect the object. But that's probably totally wrong.

So how can I compute that?

So to sum the information up, I have learned, that the sensor datasheet should provide:

There is an example of those information taken from the datasheet provided by @Andyakka.

The SPL and Sensitivity:

If I want the pressure at angle \$0°\$ in any other distance \$r\$, I compute it with following formula:

Then I can use the same formula as shown above to compute the SPL at any other distance.

Now I would need to compute the wave that gets reflected from an object at certain place depending on the object's size and surface. If I knew at which angle and with which pressure a wave gets back to the sensor, I could use the sensitivity graph to compute the voltage produced by the sensor.

If I know the pressure of the wave at any other distance, I use the formula shown earlier to compute respective SPL at 30 cm and from there I compute the actual sensor output.

Please somebody confirm or provide explanation of the error. Thank you!

What does sensitivity mean?

It tells you how much signal voltage is produced for a given sound pressure level at a certain distance. The dB value is usually quoted as: -

So how can I compute that?

More than likely, in the data sheet it will be revealed in the typical operating conditions table (as per the DS I linked on page 4).

As to the directivity graph, it shows the relative sensitivity with respect to the angle. I.e., at 0° you have full sensitivity (0dB) as specified in the other graphs. At 60° the sensitivity is reduced by about 25dB.

So whatever sensitivity you get at your operating conditions from the other graphs, e.g. if you use 38kHz instead of 40kHz, you must (additionally) derate it by the given amount depending on angle.

Not the answer you're looking for? Browse other questions tagged sensor datasheet ultrasound or ask your own question.

0
Understanding the workings of an ultrasonic sensor