I have here some fairly lights. It's a string of coloured LEDs with a transformer and control box at one end. The control box lets you select a bazillion different lighting patterns. (Presumably the box contains a small microcontroller. I suspect it uses PWM to dim the LEDs.)

There are 4 colours of LED, but they always light in pairs. This leads me to believe they're wired as two independent circuits. Presumably wiring each colour individually would use twice as much wire, which would eat into the manufacturer's precious profit margins.

This got me thinking... Is there some way you could connect all the LEDs to a single circuit yet still be able to control them independently? In particular, I'm wondering if you would connect each LED across the power rails in series with some sort of trivial passive band-pass filter. That way, the microcontroller can generate some complex multi-band waveform, but each LED only receives a narrow(ish) frequency band to light it.

Basically, I'm wondering if something similar to this could be made to work:

Where each colour of LED has a band-pass filter tuned to a different frequency. (I gather capacity on its own isn't really a functioning filter...)

To be clear, I doubt this would end up actually being any cheaper to manufacture. But I'm wondering if it's technically possible. (I'm also not intending to try to make it, just figure out what the schematic would look like.)

One wire, are you sure? "Addressable" LEDs are becoming rather common and this might be what you are describing. This is where each "LED" includes a red, green, and blue LED inside, along with a serial interface. This uses four wires typically. The serial data piped into one LED is "daisy-chained" to the next, all the way to the end of the array. This data transfer typically happens very fast - hundreds of times per second, so isn't noticeable except for very long runs. The end result is "each LED can be a different color and they all can change in any way imaginable," depending on how "smart" the controller is.

In terms of datasheets, here is a 5mm WS2812 addressable LED module: 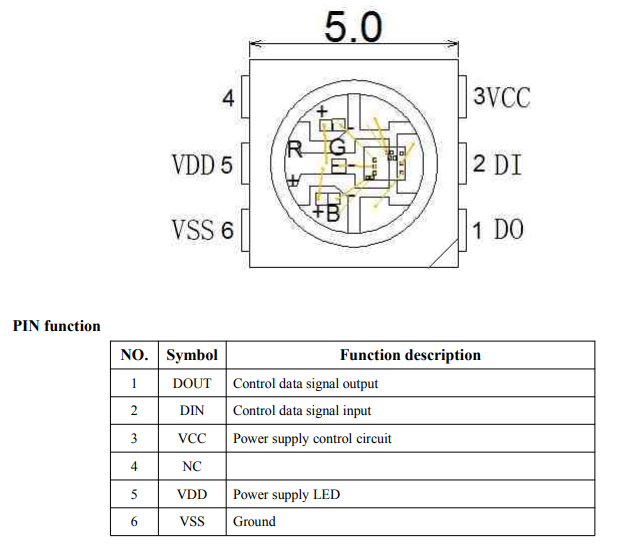 For two LEDs, on two wires

With LEDs attached as above, you can illuminate the red ones by applying a voltage in one direction, and the green ones by applying a voltage the other way. Just make sure you choose LEDs with which can safely withstand a reverse voltage sufficient to light the other type. If the LEDs have different forward voltages (and they probably will) you'll need series resistors on each one, or you'll need a current drive rather than a voltage.

If you want both on, switch back and forwards too fast for the eye to see.

You can even get a single IC containing the transistors necessary to switch the voltage on and off, backwards and forwards. It's called a H-Bridge, and they are typically used to control DC motors.

Not the answer you're looking for? Browse other questions tagged lighting or ask your own question.