What are line-of-sight limitations of UHF RFID readers?

I am looking at some UHF RFID readers for a project and I have a few questions about the overall concept of detecting passive RFID tags.

The system is concerned with keeping track of people passing through a specific point (doorway, staircase, etc.). This is not an access-control application; ideally the people walking through a certain checkpoint would have RFID tags on them but wouldn't take them out for scanning. Sort of like a car passing through an automated barrier after RFID tag detection, only in this case there is no barrier involved.

Think of it as a passive personnel locating system. The system would only keep track of "Person A was last seen walking through stairwell 4, half an hour ago", that's about it. 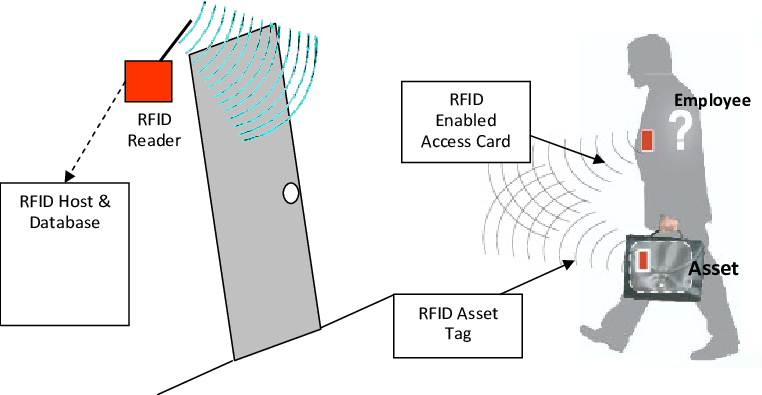 I have looked at readers like this one with circular polarization antenna and a range of 3-5 meters. I'll be using passive RFID cards. My questions are:

If you could place a wire loop antenna around the door you could do this with low frequency RFID. Three turns of 10 AWG wire surrounding a doorway makes a nice passageway detector. TIRIS readers were recently discontinued by Texas Instruments but ProtagD in Germany makes clones of them.

Shadowing will be a challenge regardless of technology. You want a large read zone to have good detection efficiency while a smaller read zone would limit shadowing.

Low frequency RFID has a better defined read zone while UHF has longer read range which could increase shadowing. UHF also will sometimes pick up a rogue tag that is quite far away (in another room).

Low frequency RFID without anti-collision will only detect the strongest tag and block others. UHF has anti-collision which means it will detect all tags in the vicinity, again increasing the opportunity for shadowing.

Some readers can measure the tag signal strength but this is a poor indication of distance since the strength changes as the tag changes orientation relative to the antenna. A tag further away from the antenna could have a stronger signal than one closer that is not oriented as well.

The primary advantage of UHF in this application would be that the antenna is a small box you can mount above the door as opposed to LF which would need a wire loop around the door. By pointing the UHF antenna down it might work to limit the zone to just the doorway area.

HF RFID probably would not be a good fit for this due to short read range and limited antenna sizes for scanning large areas.