I'm designing a circuit that hooks up an SP0256A speech synthesizer to an AVR microcontroller and would like some help with the audio output amplification. The datasheet describes the output as being "a Pulse Width Modulator that creates a digital output which is converted to an analog signal when filtered by an external low pass filter." An example circuit is given using an LM386 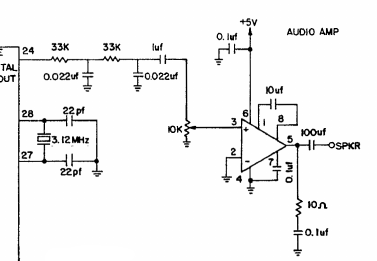 (top is 5v rail, right connection is to DIN socket which connects to a TV audio input)

As I see it the advantage of the Maplin circuit is that the speech synthesizer output can be combined with the sound output of the computer (a Commodore VIC-20), the complete circuit has a pair of DIN sockets just for this purpose.

I'd like to have a more compact circuit, can I use the LM386 in place of the transistors?

(edit: I've noticed the following on the datasheet re the Digital Output "Pulse width modulated digital speech output which, when filtered by a 5KHz low pass filter and amplified, will drive a loudspeaker")

Yes, you can use an active filter, like, as you suggest, instead of the passive first stage in the upper diagram, and instead of the nonlinear BJT-based filter in the lower diagram.

Whether the LM386 would be my amplifier of choice here: probably not, but whatever fulfills your application's needs!

You'd have to take care to:

The problem with the LM386 is that it's not an opamp; hence, calculating how you build a bandwidth-limiting loop is going to be rather intense.

If I wanted to use an LM386: a single stage RC filter would more than do the trick of being a low pass filter with a cutoff of let's say 4.5 kHz and a stopband starting at 10 kHz with 50 dB of attenuation. Either the application note/datasheet of the speech synthesizer isn't even remotely honest when it says "all noise is shifted above 10 kHz", or the filtering circuitry is total overkill. I'll go with both assumptions and say: get an opamp with 2 channels (or more). Use one channel as a voltage buffer to improve the horrendous current sourcing ability of that PWM output (whyever it is that bad – this should be a CMOS device, and a CMOS output driver should work better and could have been implemented in the same technology); use the output of that voltage buffer to feed a simple RC filter, followed by the second stage, followed by yet another RC filter, followed by the LM386. It's a stupid design (with two opamp stages, one could have built a much nicer filter), but it works without any ado.

Let's be honest here: not the route I'd take. The LM386 is a relatively crappy amplifier, and its filter characteristics are sloppy, it's hard to design around and furthermore:

You have a PWM signal. Why use a class-AB amplifier to make it loud, especially when you need to filter it at the same time?

Instead I'll propose the following:

Build a class-D amplifier. You already have a PWM signal!

Use that to drive one of the thousands of half-bridge gate drivers you can buy, for example the ADP3110A.

Use the outputs of that to control a n-channel dual mosfet device, e.g. NTGD3148N.

Connect the mosfets up like shown in the gate driver's datasheet, and AC-couple the output to an LC lowpass filter. Tadah! Class D amplifier.

Honestly, I was surprised when I read the SPO0256 datasheet! This was an impressive feat for DSP in the early 1980's.

This is essentially a decoder for LPC-compressed speech. Nice! Though I must admit: If all you want is actually to play back compressed speech, then choose any modern speech codec and do the decompression in software on the Arduino itself. All but the earliest Arduinos are plenty fast enough for simplistic codecs.

If your aim is to reproduce the original sound of the 1980's speech synths, go for it :) this is a cool project.

The amplifier is secondary to the application, the filter is the critical part.

The amplifier only has to:

Your amplifier choice completely depends on the load you are going to put on it.

Both of the choices you present do this, but the transistor amplifier lacks overall feedback, which means it will have more distortion. It is also a class-A design, while the opamp is a class AB. This makes it likely to have more power consumption.

1
Connecting TDA7052 with a microcontroller
12
Fully understanding LM386 datasheet minimum parts example
2
Reason for Distortion in Amplifier for Speech Signals
8
Why does my electret microphone amplifying and filtering circuit output so much noise?
1
Should a PAM8403 be directly fed from a CHIP GPIO audio signal?
0
LPF and AMP for ADC with op amp not giving sufficient gain
0
How do I remove the offset from the DAC output and change the range?
2
Why does the positive wave of my class AB amplifier output get clipped far below rail voltage?