What is the purpose of the resistor between the Vcc and discharge pins in the astable 555 timer?

In a standard astable configuration of the 555 timer, we have two resistors R1 and R2. The capacitor charges through both resistors but only discharges through R2, consequently, the high interval is longer than the low interval.

I am having trouble understanding the purpose of R1 here, won't removing it make the charge and discharge times equal, effectively making it a 50% duty cycle? 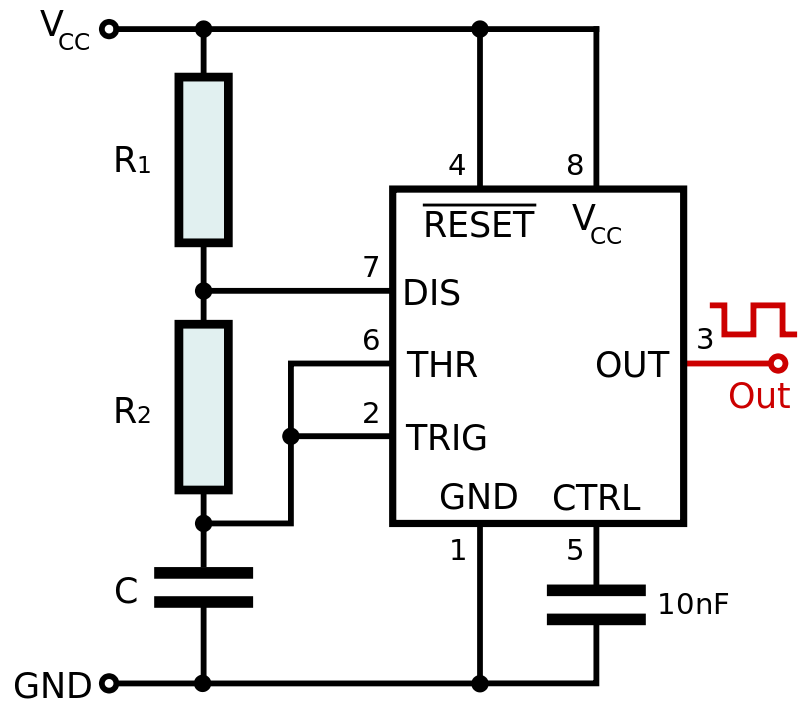 I tried following this question, but the answers there is not comprehensive enough. Moreover, other resources I came across states that the resistor is essential and can't be removed. Other than changing the ratio between the low and high interval, why is R1 essential?

Pin 7 is the discharge pin. It's an open-collector type, so it can only sink current to ground. It cannot source any current, at all. (It only becomes active when one of the comparators determines that it is time to discharge the capacitor.)

However, as soon as pin 7 goes active and attempts to sink as much current as possible, the very low resistance of a short-circuit from pin 7 to \$V_\text{CC}\$ would mean that very high currents took place. These would be almost certainly be sufficient to vaporize the aluminum interconnects on the IC die somewhere near where pin 7 is bonded. So a direct connection from pin 7 to \$V_\text{CC}\$ is ill-advised because of the problem that occurs when pin 7 becomes active.

A resistor from pin 7 to \$V_\text{CC}\$ isn't entirely desirable as pin 7 not only has to work on discharging \$C\$ via \$R_2\$, but then pin 7 also must sink any current produced by \$R_1\$, too. However, that resistor is absolutely required in order to limit the current that pin 7 sinks, when active.

Pin 7 will have a specified current limit and this must be more than enough to cover the discharging current from \$C\$ as well as the excess current being supplied via \$R_1\$ when pin 7 is active. So that's something to watch for in the datasheet, too.

If you look at the 555 internal schematic as shown on the TI datasheet, you will see that the Discharge pin is only connected to the collector of a transistor - that transistor can pull the Discharge pin Low, but there is nothing in the chip to pull that pin high, or to provide and charging current to the capacitor. R1 pulls that pin high, and provides the charging current for the capacitor.

Not the answer you're looking for? Browse other questions tagged capacitor resistors 555 or ask your own question.

8
purpose of diode in this 555 timer application
0
556 dual timer circuit not clear to me
1
Simple methods for switching a boost converter, to get a stable output voltage?
3
How the pin2 of 555 timer triggers this simple circuit?
0
IC Timer 555 Astable Multivibrator 50% Duty cycle
0
Understanding voltage isolation using resistors (555 Timer)
3
General circuit debugging techniques, and my 555 timer in particular
0
Toggle 555 timer IC both with switch and arduino
1
555 Timer astable mode, capacitor discharges only through R2, why?
2
Appliance countdown timer using current transformer and 555 timers