I'm building a circuit powered from a 12V 55mAh (A23 battery). Needless to say that power consumption is a primary concern. The circuit is an ATtiny85 which is driving 13 LED's (in 5 groups). I initially used a voltage divider circuit to reduce the 12V down to 5.5V to supply the ATtiny85. This worked but I found the voltage divider was eating up too much current, 5mA, even when the microcontroller is put to sleep and all LED's are turned off. When active it consumes 5mA to 7mA. I replaced the voltage divider with two 1N4733A 5.1V Zener Diodes in series:

The trouble with the new circuit is that it is very sensitive to the supply voltage. At 12V input (using a bench power supply) the circuit fires up and works well. I get around 5.1V at Vcc. At 11.5V supply voltage the circuit will not start.

When I was using a voltage divider instead of the diodes the circuit worked well down to about 8V supply voltage. With the diode setup it needs 12V to start and will keep running down to about 11.5V before it shuts off.

Is there a way to modify this circuit so that it works over a wider range of supply voltages? Ideally down to around 6V (as the battery discharges). The datasheet's I've looked at for the Zener diodes don't mention anything about the expected voltage drop across the diode when it's conducting at the breakdown zener voltage. If I replace D1 and D2 with 3.3V Zener's should I get the same voltage drop? I'm not sure how to calculate the expected voltage drop at Vcc.

Since no-one has tackled your basic question, I'll attempt to explain:

You cannot calculate the voltage across a Zener at low current. The reverse voltage is a characteristic of the device and depends on the construction/architecture.
There is no better reference I've found than the OnSemi Theory of Zener booklet and you should start by reading this.

Zeners come typically in one of two distinct architectures, Zener effect and Avalanche effect, You are using Zeners down in the Zener effect region, which can be characterized down to very low currents and the voltage across them will vary somewhat predictably.

From the OnSemi document, here is one very pertinent graph of the Vz characteristic: 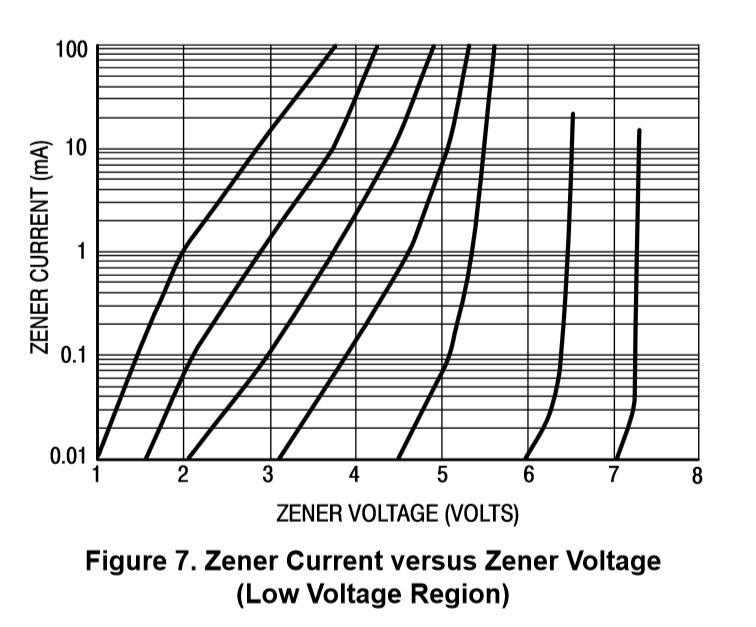 Notice that Zeners below 6V Vr have quite different Vr curves. Those below 6V have a very large slope and as you lower the current toward the leakage limit the Vr voltage varies. The leakage current is normally stable (at a given temp) for voltages over 1V.

Now to your problem space, putting 3 Zeners in series.

The leakage current for each of the Zeners will be different. The Zener device acts as a constant current source once it has sufficient Vr and until tunneling begins. Leakage current will be typically in the 10-200uA range and you will find the maximum specified in the datasheet for some devices.

For your devices (1N728A and 1N729A) the leakage current will be below 100uA @1V and will begin Zener effect between about 1V and the rated voltage.

In your configuration the ATTiny85 will draw a very low current when in sleep modes and from the datasheet you can see that when asleep with the Watchdog timer used for wakeup you can expect less than 10uA. 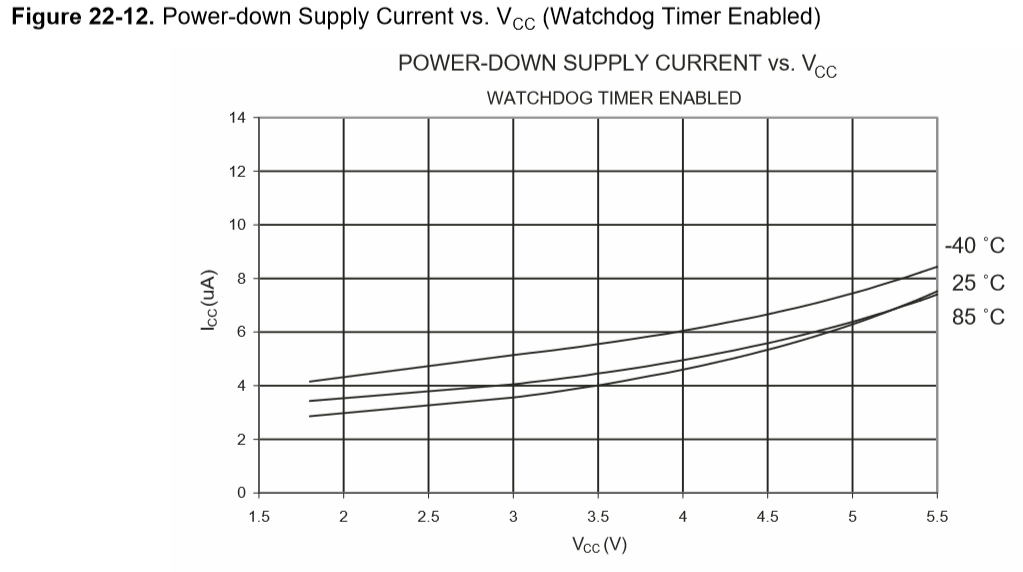 This very low current for the ATTiny85 will restrict the current through the Zeners to below the leakage current of any of them.

This may result in the VCC for the ATTiny rising to above the Absolute maximum rating of 6V and result in device failure. And indeed you already showed that the VCC rises to 5.1V. 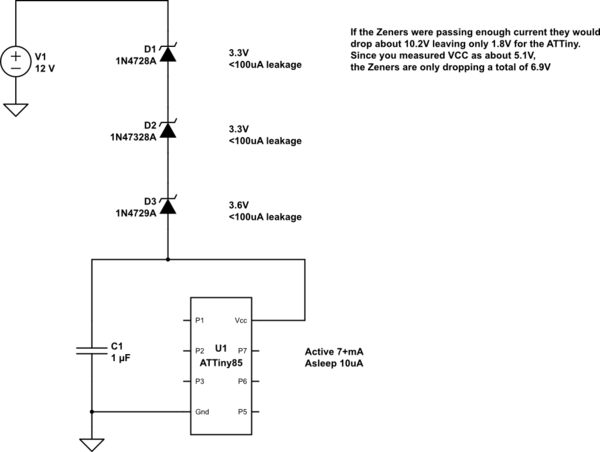 This low voltage drop across the Zeners explains why your circuit works down to 7VDC on the battery, but it is not a good mode of operation and you could easily damage the MCU. My assumption here is that you actually have a capacitor across the MCU you have not shown, and you are effectively running the ATTiny from that when it wakes up.

Viable Solution based on a regulator

Your best bet would be to invest in a linear series regulator. There are many variants available that have very low quiescent current such as the MCP1703 which would provide a single chip solution at low cost (

It's doubtful that you will find a switching regulator for the same price and low power.

If you really need to save power, you must use switching mode power regulator. Everything else will burn current, with passive dividers, Zener parametric stabilizers, or LDO regulators.

To get optimal design, my advice is to go to TI.com, enter your design parameters (DC 6V-13V Vin, 5V 0.02A out), and launch their free WEBBENCH Power Designer. Here is the top of their 162 variants that meet your parameters: 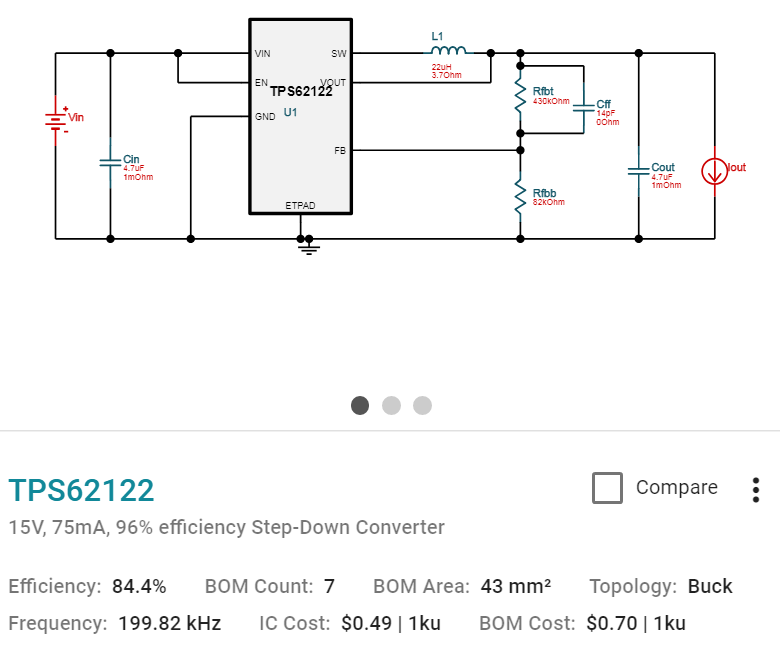 If you don't want to mess with 7 components and inductor, here is a single-piece design using their module with integrated inductor: 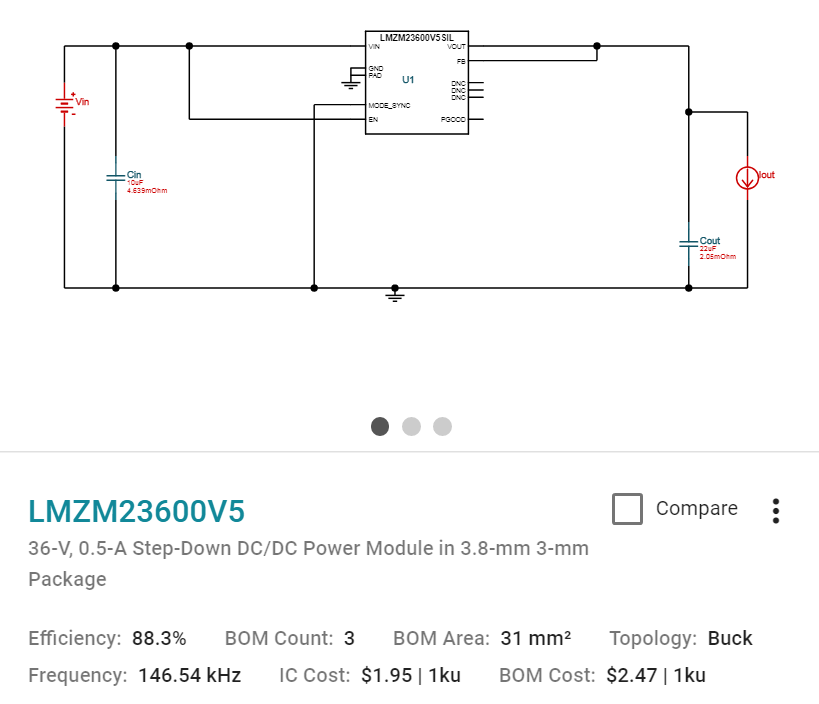 But the latter is more expensive. Both designs will fit into 7x7mm area.

You might want to consider alternatives as LTC3642 ot ADP2360, they need only one inductor. I am sure there are many other options depending on market locality.

Fundamentally, the problem you're having is that you have an input voltage that varies over a wide range, and your circuit demands a much smaller voltage variance. Diodes drop a fixed amount of voltage, so as you've seen, while they work well to drop your maximum input voltage down to where you want it to be, they will shut off when your voltage drops.

What you need is a Voltage Regulator. A simple linear regulator should work okay, given your low current draw, but for maximum efficiency you might consider a switching voltage regulator.

This configuration does not save any power and provides unstable voltage. It might even contribute to higher sleep current because voltage grows when current falls. There is nothing than can be done to improve power efficiency, because in this configuration power is always current multiplied by supply voltage and all voltage overhead is wasted as heat on the diodes. Any other linear solution would only add extra consumption to power the regulating circuitry. Thus, the only way to reduce total power consumption is to use a switching regulator.

You should use a regulator. It's possible to make a crude regulator with a micropower shunt reference and a BJT but I would suggest not doing that. 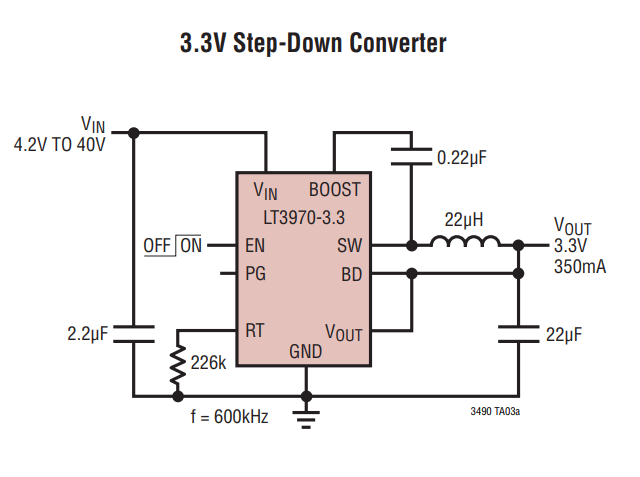 TPS709 is a linear regulator that uses 1uA quiescent current. Efficiency will be about 27% at 1mA out, 3.3V. 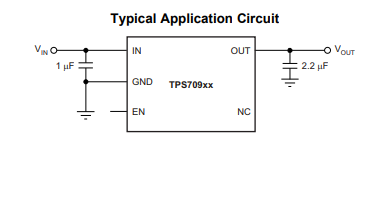 Both are very compact and easy to use. The better choice (of these or many other similar parts) will be determined by the exact requirements of your application.

By changing the zener diodes to lower values and using 3 in series as well as moving the position of the capacitor the following circuit improves the usable supply voltage range to between 12V and 9V.

Once started, the circuit continues functioning until the voltage reaches about 7.5. This is a big improvement over the original circuit's range and keeps the low power feature of the dc to dc voltage conversion. This circuit drops the battery input voltage by a more or less constant 6V.

The voltage drop introduced by each diode varies by the Zenier value. The circuit above uses one 3.6V and two 3.3V zener diodes. Zener diodes with higher breakdown voltages have larger voltage drops when conducting in reverse.

The ATtiny85 works over a wide voltage range (1.8V - 6V) so a regulated voltage source is not needed. With an average current draw of 0.2mA the A23 battery should last for around 275 hours.

Here is the complete schematic, it works well despite the voltage swings at Vcc which is between 6V when idle to as low as 3.5V when the LED's are pulsing rapidly. 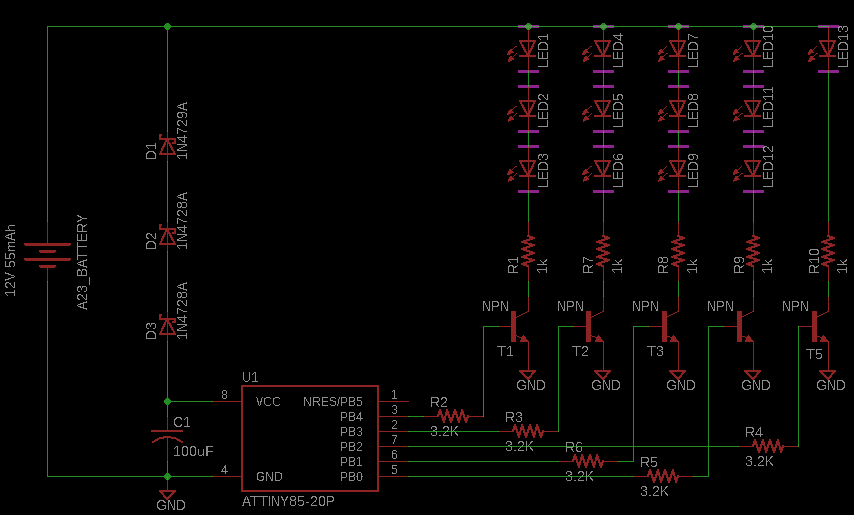 Not the answer you're looking for? Browse other questions tagged voltage diodes zener or ask your own question.