I am looking for capacitor type which has very low leakage such as 0.5nA since I am working with a sensor which generates between 0.9nA to 0.55uA.

Based on my research Film or foil Capacitor has the lowest leakage but not even close what I looking for, they all close to micro and not nano. 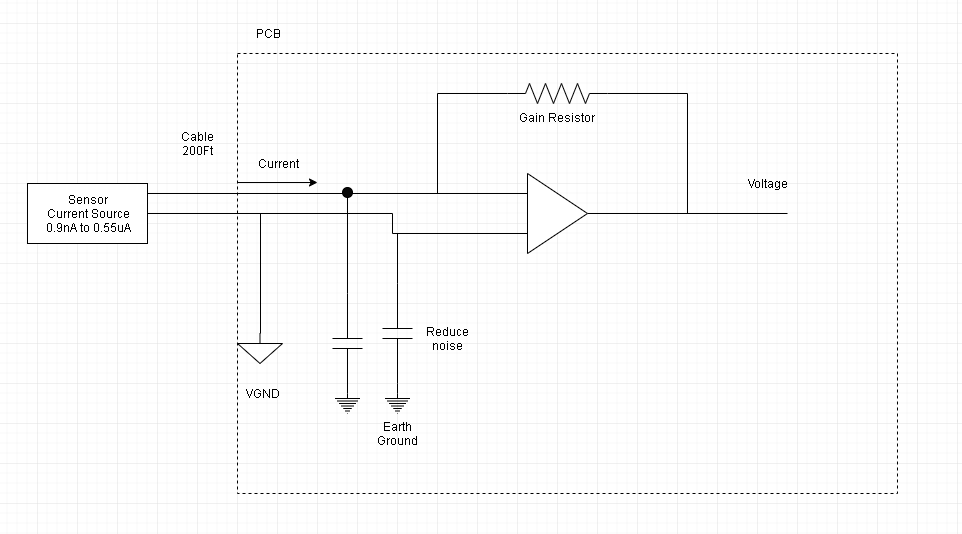 In my experience any standard ceramic capacitor will be good enough. For example, I have measured a 100pF NP0 capacitor having <10fA of leakage with a 2V bias.

You probably won't get a good result with electrolytics though.

Comparing those two series, the ceramic is better for capacitances less than about 0.1uF, which is where NP0 capacitors start to get expensive anyway.

Both types need some care with mounting to keep the leakage low. Ceramic caps can get micro-cracks which result in excessive leakage and SMT film caps are also prone to damage from the soldering process (through-hole much less so).

If you want to go nuts, there are PTFE (Teflon®) capacitors that are much (maybe 1000x) better, but harder to source and much more expensive.

Edit: Given your 2.2uF requirement, I would suggest the film type. Do consider the time required at 900pA to charge 2.2uF to, say, 1V will be more than 30 minutes. Also, if your diagram says 200 feet, you are going to have to worry (a lot) about the leakage in the cable.. in such a case one would strongly wish to have the amplifier at the other end of the cable if at all possible. Also if there is significant voltage across the caps, even a small change in capacitance (due to temperature or physical changes such as pressure or stress) will result in a significant "noise" current.

Also beware of the dielectric absorption of any capacitor at low frequency. Even when driven from a low impedance, small currents (significant compared to the currents you are trying to measure) continue to flow in most capacitor types for many 10s of seconds after a change in the applied voltage. Dielectric Absorption

Not the answer you're looking for? Browse other questions tagged capacitor leakage-current or ask your own question.