Amount of feedback in an amplifier

But if the figure quoted refers to \$\beta\$, then a \$\beta=1\$ is maximum feedback, but \$20\log(\beta)\$ with a \$\beta=1\$ would mean 0 dB of feedback which doesnt make sense, because I believe that a feedback factor of 1 should give an infinite dB of feedback. So which one is it?

Take this all with a grain of salt, I don't work in dB on a daily basis. An RF guy could probably answer this blindfolded with their hands tied behind their back. But I'll take a crack with what I remember from university many years ago.

When you hear things described in decibels, that's almost always expressing a ratio. When it comes to a ratio of power, the formula you want to remember is: dB = 10 * log10(P_o / P_i). When it comes to a ratio of voltages the formula is dB = 20 * log10( P_out / P_in). This is due to the fact that Power is proportional to the square of Voltage, and exponents become multipliers in logarithmic space (because of the algebraic laws of exponents and logs).

Then it comes down to understanding what the ratio being described is. So when I see something that says "This amplifier has 30dB of feedback", what I take that to mean is the ratio of the power fed back to the total power output of the circuit, which is to say: 30 = 10 * log10( Power_feedback / Power_totalout). I could be wrong about that, but it's a decent guess. It matches a rule of thumb I remember, which is 3dB equates to 50%.

Hopefully someone else will either ratify this logic or refute it (in which case I will readily withdraw the answer).

Note that feedback factor is different to 'feedback fraction' which = B = R1/(R1+R2). 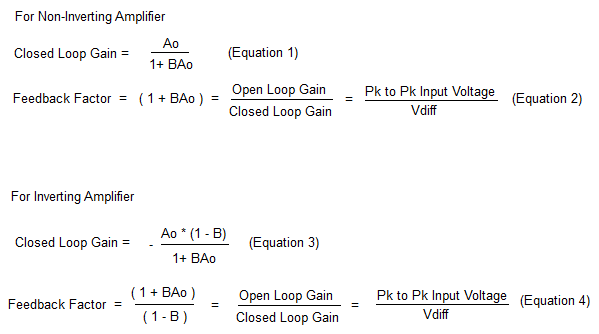 Not the answer you're looking for? Browse other questions tagged feedback loop-gain negative-feedback or ask your own question.