How can I make the design simpler?

I have designed a circuit and it is working. However, I think it is too complicated and can be changed or simplified. I might be missing something. I am finding hard to create a 1 second delay.

A locomotive has to run, without attention, backwards and forwards along a length of track. At each end it is to stop for about a second before starting in the reverse direction. light dependent resistors (LDR) are used as sensors and they are under the track. The H-bridge has two logic inputs, X and Y, to control the polarity of the track; X high Y low makes the engine move in one direction, X low Y high makes it move the other way. X and Y in the same state disconnect the supply from the track and stops the engine. 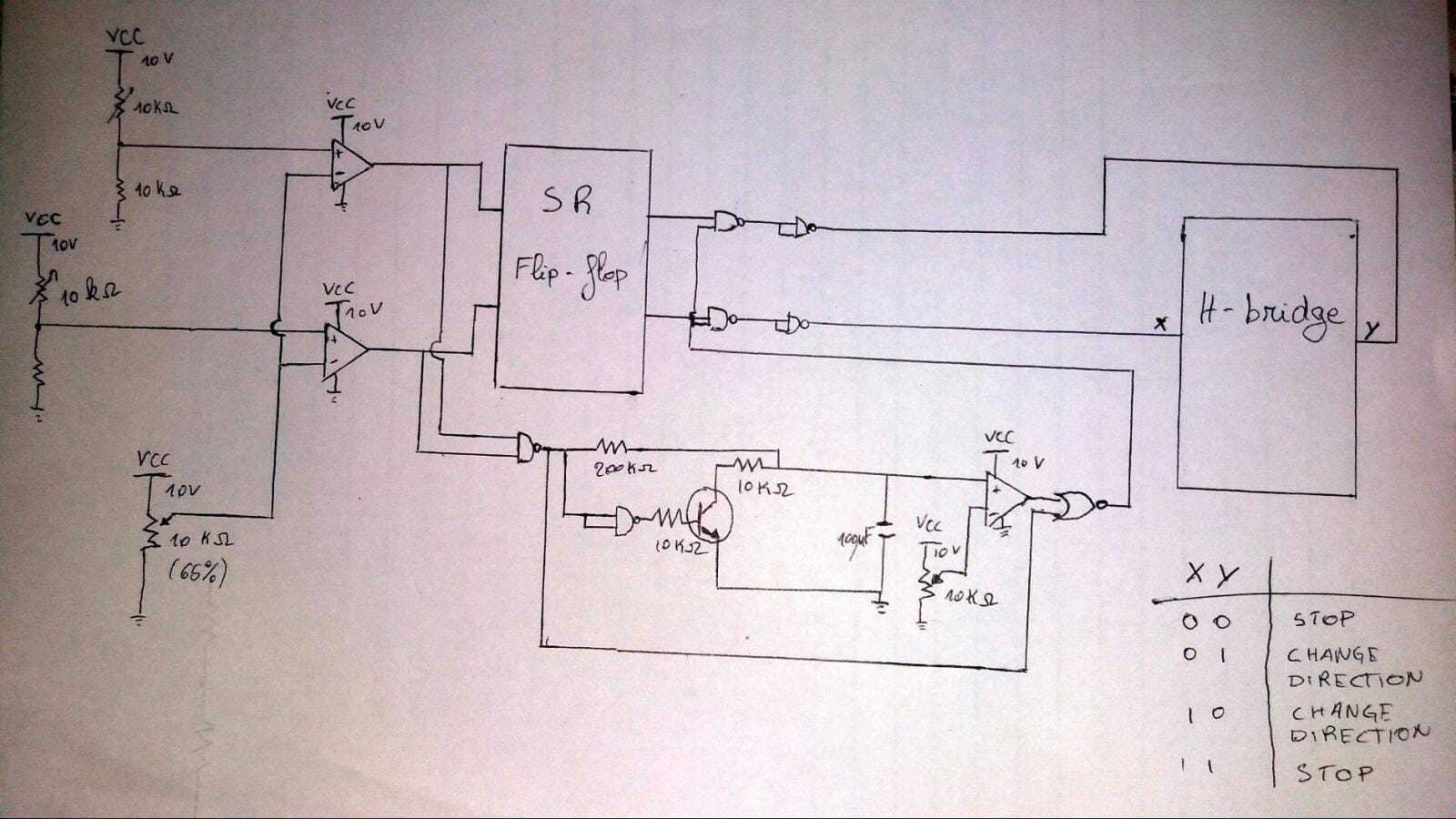 That actually looks pretty good, except that you need to add reference designators to your schematic so that we can talk about it.

The main improvement you could make would be to replace your timer circuit (in the bottom center) with one half of a dual monostable.

You wanted a more simple solution - ? OK, try this.

The LDR's now are tied to Vcc. Their logic polarity is reversed from my first schematic because there no longer are inverting gates between them and the ff inputs.

U1 is eliminated. The LDR's now drive the ff directly. This eliminates the need for noise filter capacitors, because the LDR's no longer drive the monostable directly (where re-triggering was an issue), and noise or re-triggers at the ff inputs don't matter; once the ff changes state, it stays there no matter what happens on the triggered input, until the other input is triggered.

The ff inputs now are doing double-duty as Schmitt trigger voltage comparators. The comparison voltage level is fixed within the chip, and can vary from one part to the next (see the datasheet for the exact part you have), which is why the LDR bias resistors are adjustable.

The timer is basically the same as before, but the logic polarity (and hence the charging direction) is reversed. This is because there no longer is an inverter between the timing components and the bridge driver signal gates (U2C and U2D). Two timing capacitors, one for each ff state-change, are diode-ORed into one timing resistor, R5. I show R5 as 715 K because 715.96 K is the calculated value based on the original CD4093 datasheet. But again, Schmitt transition levels vary from one manufacturer to the next. If you want to tune the circuit delay period, try a 470K fixed and 500K pot in series to find the correct resistor value for your part.

I show the timing capacitors as non-electrolytic, mainly because I have a bunch of 2.2 uF ceramics. If you use an electrolytic, the anode (+ end) goes toward the diodes. C3 is the power supply decoupling cap for U2. It can be the same as the timing caps.

NOTE: No 555's were harmed in the creation of this design.

There are two problems with the design, the monostable and the LDR comparators. Plus, some other thoughts ...

Better to either build a monostable out of two 4093 NAND gates (my preference) or commit to adding another component type to the design, the 4538 monostable. The datasheet says it's output pulse width range includes infinity, but your requirement is a bit shorter than that. The thing to watch is the ratio between the capacitor charging current near the end of the cycle (when it is at its lowest value) and the timing pin (2 or 14) input current. Take the max. value at 25 degree C and double it. You want your min. charging current to be at least 10 times that to reduce it as a source of error and variability (the input current is very temperature dependent).

Here is an all-4093 design. Now that I see this, another version is possible with only 4 gates.

Ci and C2 are noise filters to clean up the slow edges from the LDR's. U1A and U1B act as comparators, turning the LDR ramps into crisp edges. U2A and U2B form the set-reset flipflop. U1C acts as an inverted input OR gate. When either input goes low, the output goes high, pulling both ends of C3 up to Vcc and forcing the output of U1D to go low, disabling the bridge driver signals. C3 charges through R5, and eventually, the voltage across R5 is low enough that U2B changes state, letting the flipflop signals through to the bridge.

Not the answer you're looking for? Browse other questions tagged capacitor circuit-design logic-gates delay or ask your own question.

0
How could I design circuit to make filter?
1
How can i make a water pump circuit
1
How to make logic gate combination using switches and bulbs?
0
How can I make an OR gate out of two sockets
0
How can this capacitator discharge? (Make: Electronics experiment 9)
0
Simpler delay before power on