I read following threads, but still there are some unclear parts for me. Multiple I2C devices with the same address I2C Pull-ups with Multiple Power Supplies Design for Multiple I2C slave devices

I have two slave I2C devices (sensors) to connect to one master MCU. They are not modules on breakout boards with preset PU resistors.

I was thinking to do as following schematic. But I would like to know your recommendations, if there are issues with it, or if there are better ways to do it. 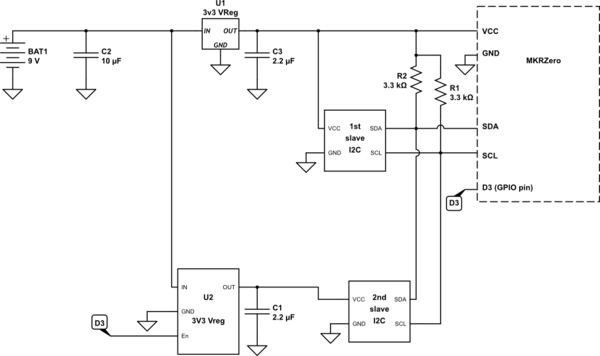 If I use this schematic, do I have to add diodes to prevent current draw from second slave sensor when it is off?

What do you think about adding a buffer, like PCA9306, in this schematic2?

What do you think about using I2C mux e.g. PI4MSD5V9540B? In case of using mux, I can use two sensors with same address.

"Shutting off" the unneeded I2C device will probably not work like you expect. The issue is that the i2c data lines will probably have protection diodes to VCC and GND that are not shown in the datasheet.

What will happen in that case is that current will flow into the data ports of the unused device and parasitically power it and/or lower the pull up voltage on the data lines.

With other protocols there are simple circuits you can use to prevent this, but i2c is bi-directional so most of those solutions will not work.

The most practical solutions are to either use a shutdown function built into the i2c device, or perhaps use of a different protocol. If you must use i2c, some type of bi-directional switch ic, or a SSR style mosfet circuit might solve the problem.

Is there a good practice approach to powering down peripheral devices (SPI, I2C, UART) which use significant power?

You will need to add pullup resistor also on the other side of PCA9306.

If the device is designed to be connected / disconnected, you would be safer adding some input protection on the I2C lines.

Not the answer you're looking for? Browse other questions tagged i2c slave or ask your own question.