What is the recommended way for termination RS485? I read about couple of options to do this. If I don't want to do dissipate extra power, can I just put 120 Ohm resistor? 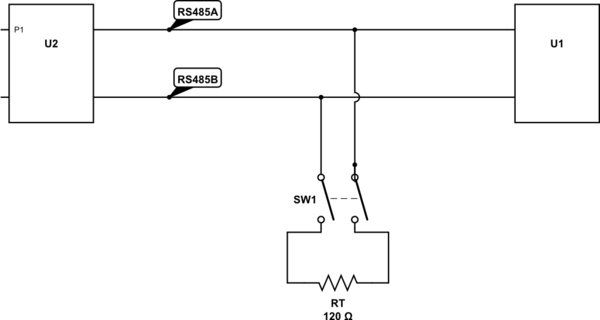 The termination resistor should locate in the end of the transmission line? I saw that it can be before the last slave of the line and sometimes after it.

You should also bias each part of the line to prevent unwanted noise on the transmission line. The exact values should be specified in the datasheet of the device you are using.

The link below gives a good overview with the references being more in depth. https://en.wikipedia.org/wiki/RS-485

This Maxim Tutorial gives guidelines on wiring up RS485 networks

Abstract: The proper method of wiring an RS-485 network is described, with recommendations for twisted-pair cabling and correctly locating termination resistors. Received waveforms are shown for examples of proper and improper cable termination. Configurations are shown for a simple, single-transmitter/multiple receiver network through multiple transceiver to multibranched circuits.

This one discusses Fail Safe terminations, which could be handy in cases where different types of RS485 transceivers are used.

Deciding whether you need a termination resistor or not is only part of the problem in implementing an RS-485 system. Normally, an RS-485 receiver output is "1" if A > B by +200mV or more, and "0" if B > A by 200mV or more. In a half-duplex RS-485 network, the master transceiver tri-states the bus after transmitting a message to the slaves. Then, with no signal driving the bus, the receiver's output state is undefined, as the difference between A and B tends towards 0V. If the receiver output, RO, is "0," the slaves interpret it as a new start bit and attempt to read the following byte. The result is a framing error because the stop bit never occurs. The bus goes unclaimed, and the network stalls.

Unfortunately, different runs of chips can produce different output signals on RO for a 0V differential input. The prototype can work perfectly, however, certain nodes will fail in a later production run. To solve this problem, bias the bus as shown in Figure 7 under Multidrop/Fail-Safe Termination. Biasing the bus ensures that the receiver output remains "1" when the bus is tri-stated. Alternatively, you can use "true fail-safe" receivers like those of the MAX3080 (5V) and MAX3070 (3V) families. These devices ensure an RO output of "1" in response to a 0V differential input by changing the receiver's threshold to -50mV.

Not the answer you're looking for? Browse other questions tagged differential rs485 termination or ask your own question.