How long can an LED withstand its rated peak current?

I am working with several 7 segment displays HDSP-F103. According to the datasheet, each segment has a peak current of 45 mA, but it doesn't specify for how long in time or in PWM duty cycle. 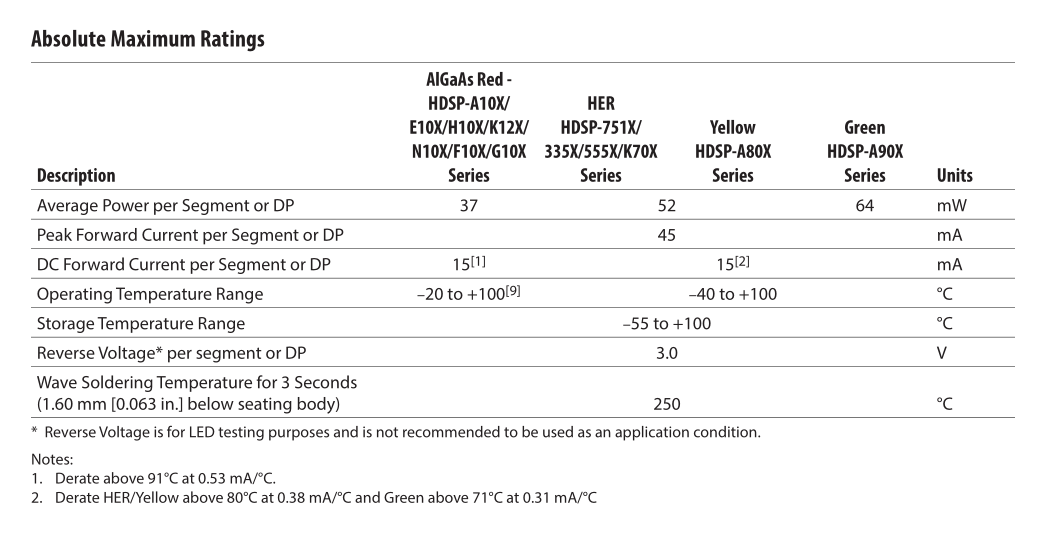 It does mention 'average power' (37 mW). So I wonder if it's OK to use this parameter to work out the peak current time. It that case, I calculated the limit of 45 mA at 44.4 % of duty. Based on this, I assume safe to run the segments at 40 mA, 20%, which is my desired configuration.

Do you find any problem with this? Thanks.

The AlGaAs Red a.k.a. ultrabright Red operates at a higher voltage than GaAs.

These parts have the following TYP. specs @ 25'C:

But that's only for 1 segment.

We know the current derating is above 91'C yet the max operating temp is 100'C.

(boiling hot is bad for popcorn failures from common moisture ingress may results in LED chip delamination, as clear epoxy has poorer moisture seal on the interface compared to black epoxy.)

Stanley and HP pioneered the GaAs RED LED's so that others could multiplex them in the 1st LED digital watch in the early 70's. Since they had Vf= 1.6V vs AlGas of 2V they could handle more current but were far less bright. ( My buddy Kirk did the 1st LED watch at Litronix bought by Siemens A.G. of Germany.)

The problem was to make the gold whisker wire bond small enough to be almost invisible yet carry enough peak current not to fuse. Meanwhile the chip itself is thermal insulator is tiny so it cannot handle much power owing to the high tempco of >250/C/W.

The result is your average 5mm LED has an Abs. Max. to rated current ratio of 30/20=1.5 These parts have a ratio of 45/15=3 which permits MUXing to an absolute max of 3 digits as reasonable intensity but only 2 at max intensity.

Your approach is correct, but you should design based on the power specification from the "operating parameters" not "maximum parameters" section.

That's because power levels above the operating recommendations, while they don't cause permanent damage if within maximum ratings, may still result in unwanted temperature rise and possible wavelength shift as well as deleterious effects on efficiency, beam pattern, etc.

I think you'll be fine with 40mA at 20% duty cycle, assuming you are multiplexing fast enough that the segments appear to be solidly on (perhaps a few hundred Hz to 1kHz).

Forward voltage of the AlGaAs red at 40mA is about 1.9V (see figure), so the average power dissipation is about 15mW at 20% duty cycle. The dissipation at 15mA DC is about 1.7V * 0.015 = 25mW. Those are typical figures and you have to allow that the forward voltage may be higher than typical, but you're well within the limits.

This part appears to be limited by the maximum peak current rather than the dissipation, when you have a 20% duty cycle.

Not the answer you're looking for? Browse other questions tagged led 7segmentdisplay or ask your own question.