I am attempting to use a uCurrent Gold as referenced by several SE posts such as measuring microampere current without noise with a mains-grounded oscilloscope, to observe the small current into an inverting opamp input, for the first stage of a close reproduction of David Ashton's Pulsing Led for Competition.

My setup is diagrammed below, and I reason this is not the correct setup. The oscilloscope I'm using is a mains-grounded scope, so the connection to the V- jack on the uCurrent is shorted to the I- jack, and that represents a path to mains ground.

Referring to the diagram below, the points I marked as P1 and P2 (purple color) are normally shorted, but to insert the uCurrent, I've opened them up and inserted in the current inputs to the uCurrent. The ground wires for CH1 and CH2 of the scope, along with the connection between V- and I- on the uCurrent, result in shorting points P2 and P3 to ground, thus shorting the capacitor to ground, which is not intended.

Basically, I've concluded that the dashed green lines in my diagram below are all at equipotential, which is an incorrect test setup.

And, I reason that, had this circuit used a large separate mains-grounded (not isolated) power supply, versus what it uses which is a CR2032 battery, I would run the risk of damaging my scope (reference EEVblog #279 - How NOT To Blow Up Your Oscilloscope!).

Is my assessment correct? If so, are all of the following approaches viable? :

See also uCurrent with an oscilloscope for a video of someone else struggling with what seems to be a similar issue.

Here is the diagram showing the circuit under test, the latest uCurrent Gold schematic, and the front diagram of the Rigol scope I'm using with connections (high resolution image at imgur): 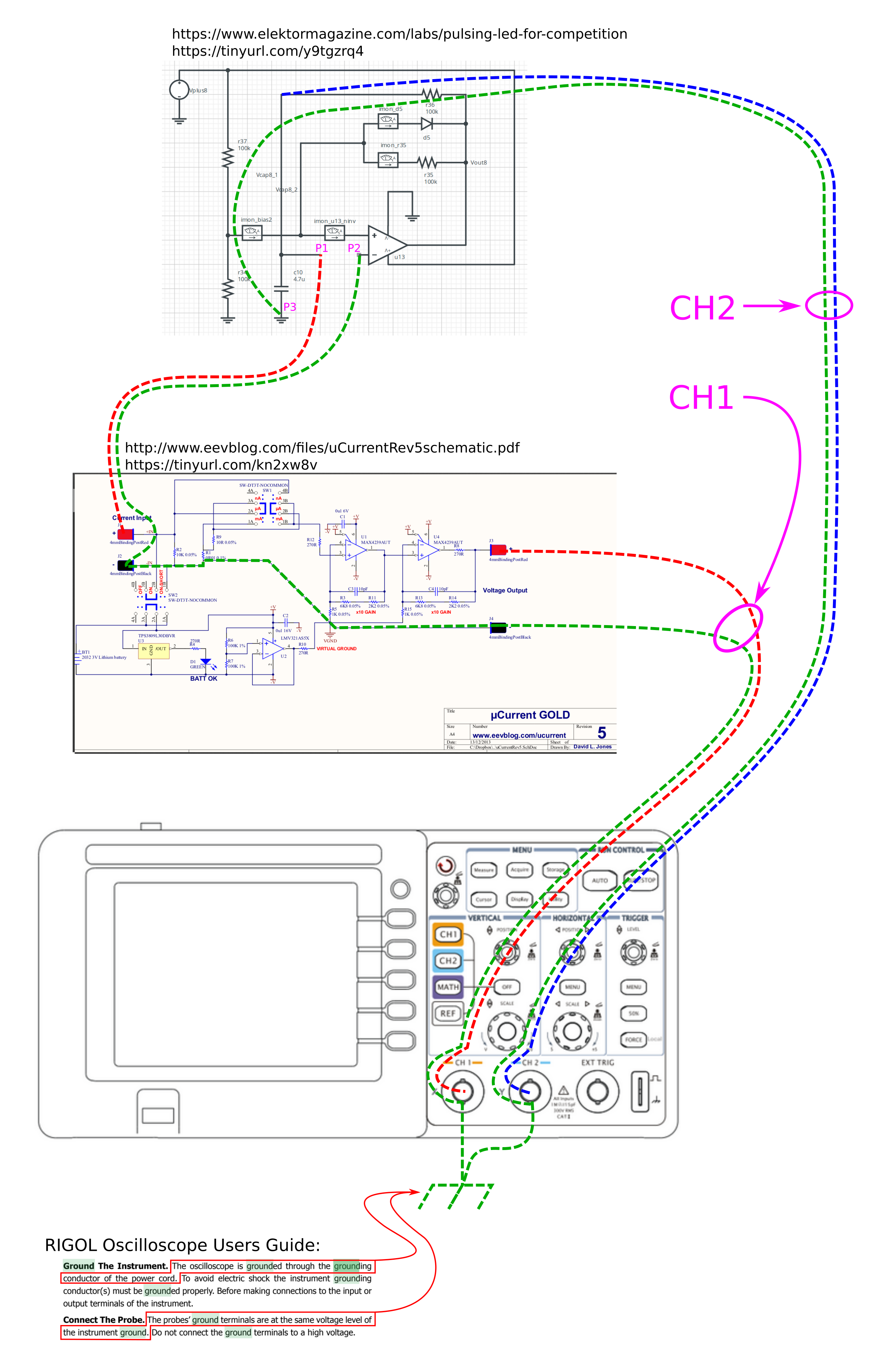 I also have a uCurrent Gold and it is super handy.

I also have run into the problem of wanting to measure the current between two points, neither of which is ground.

Since your circuit under test is battery powered, you could just connect the ground of your scope and the uCurrent to P2 - if you are willing to drop the voltage measurement at P1. The current measurement will be right.

When I really want to see the voltage and current at the same time, I use two channels on my 4 channel scope with one at P1 and one at P3 and then I difference them to generate a math trace showing the voltage at P1 relative to ground on the battery powered circuit. I then put the uCurrent output voltage on one of the other remaining channels.

Posting an answer that I'm not sure how good an answer this is compared to just using a costly differential probe. See the diagram below: 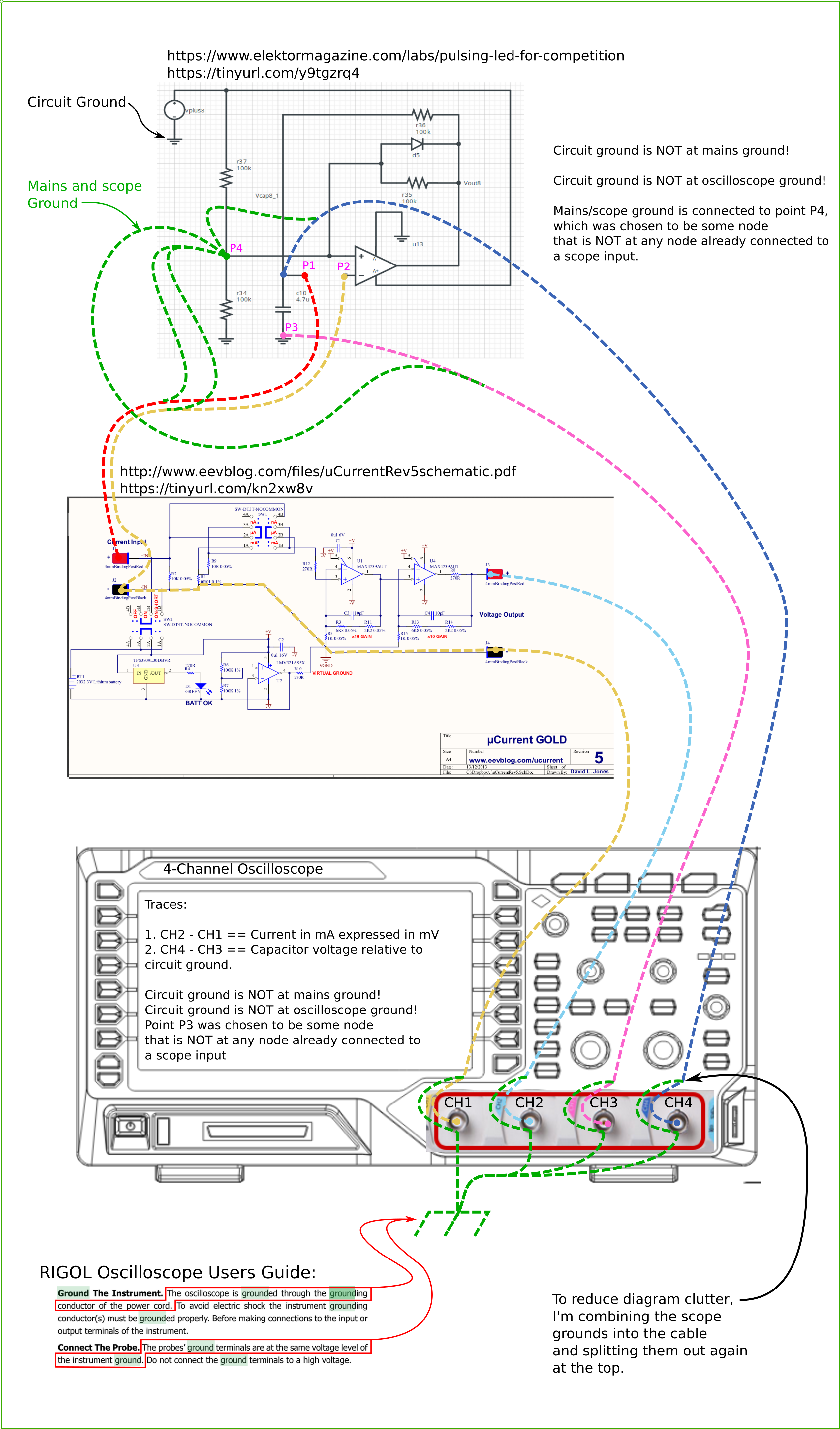 This does require all 4 of the scope channels to pull this off:

Not the answer you're looking for? Browse other questions tagged current-measurement oscilloscope or ask your own question.

18
How do you attach an oscilloscope ground spring?
2
Shorting probe tip to ground
0
No output reading from Op Amp on Oscilloscope
0
RCD tripped when measuring with a scope
0
Using CD4093 as Schmitt trigger oscillator. How to measure high and low trigger thresholds?
4
Is there a practical method to verify whether the noise have CM component in this setup?
2
Oscilloscope high impedance ground more noise?
1
Why do I get high voltage (125V) between secondary of a transformer and oscilloscope ground clip?