I recently read something about the latch-up effect in CMOS-Structures but I don't understand why are MOSFETs affected by this effect. I understand that high currents through the source-drain path cause this effect because there are npn-pnp structures in the substrate which form transistors.

Why does this cause a latch-up? I thought latch-ups are caused by high currents. But the gates are isolated which does not permit any flow through the source-drain path, especially if the device is powered off. I see only a problem through the powering on phase where the operational voltage clamps up.

So my question is: Why do "high voltages" on the input cause latch-ups too and why is the condition VDD+0.7 V (VDD + Diode drop)? How can I protect CMOS inputs against latch-ups through signals which occur even if the device is powered off?

I would by very happy about answers :)

Why do input voltages more than one diode drop above VDD or below VSS cause latch-up?

Because nearly all CMOS chips have ESD protection diodes, and those diodes are part of the latch-up process.

See figure one of this app note from TI. It shows the parasitic thyristor in a typical CMOS gate, including the ESD protection diodes.

Summary: view the well/tub/substrate as the BASE of the parasitic bipolar.

Now decide which of the various other structures can inject charge, and when that charge will be gathered up.

If there is 0.5 or 0.6 or 0.7 volts drop between the "gather up" structure and that usually rather large BASE, you are at risk.

One way to prevent the latchup is to CAPTURE the charges into low resistance nodes (often Wellties or SubTies) that are so widely distributed that the 0.5/0.6/0.7 volt drop cannot occur.

Thus a dense arrangement, of intermixed WellTies and Source Contacts, may be the cure. 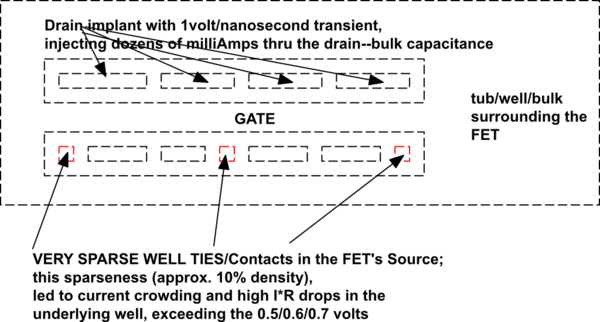 Others have given examples of latchups mechanisms.
Many modern ICs incorporate structures to reduce latchup affects. For example, see section 2.2 page 5 in the TI / Sylvania Latch-Up, ESD, and Other Phenomena application note that Bimplerekkie cited in his comment.

As well as the more intuitive specific mechanisms described in that paper, there is Murphy. If you apply voltage to a device pin at a level sufficient to cause current flow via routes other than intended by the circuit designer then clearly "it may go somewhere and it may do something".
'Somewhere' and 'something' may not be well defined, but it's not hard to think of numerous - 'it MIGHT just do this' scenarios. Among these is the injection of current into nodes that are isolated in normal operation and which may have no formal discharge path. Such isolated nodes can be charged to various voltages and are then available for Murphy to utilise to best effect.
The formation of spurious "floating gate" FETs or activation or deactivation of formal FETs within a device can occur - and sometimes does.

Effects that I have seen include:

Not the answer you're looking for? Browse other questions tagged digital-logic cmos semiconductors latching or ask your own question.

1
How does this voltage detector IC work in a circuit? What does open drain vs. CMOS output mean?
3
How can I protect an input signal to unpowered CMOS?
0
cmos inverter basic
1
Is it safe to instantaneously discharge 100nF 5V through an HC CMOS gate?
2
Practical ESD protection without latchup
2
CMOS Integrate circuit with output in Open Drain Technology
0
What is the use of pull-down networks in CMOS gates?
0
CMOS inverter explanation (low level output)