I've seen thousands of standard led chaser circuits online but I haven't seen one in which I can shut off all LED's in a non-mechanical way.

I'm wiring one pin of my chaser up to a microcontroller so that it controls whether or not the LED chaser operates or not. In the schematic, the pin is labelled as GPIO.

The reason I'm not using a micro for the entire chaser design is because I'm doing a major project with someone else and they don't know coding, so I want the other person to adjust the speed with control knobs. That part I have no problem with.

My circuit is a modification of the circuit found at: https://electrosome.com/wp-content/uploads/2016/09/LED-Chaser-using-4017-and-555-Timer-Circuit-Diagram.jpg

Here I'm just showing one LED and one stage.

Assume that one LED with one resistor is actually a set of 30 LED's with 2.0V voltage drop and 30 330 ohm resistors connected in parallel

Here's my question. Is the NPN transistor with emitter connected to ground in the right position to switch off a large array of LED's and are the resistor values to the NPN base correct?

And could I also copy the transistor to LED arrangement (circled in green) and apply it to each Q output of the 4017 and tie the NPN emitters in the LED arrangements together and to the NPN collector of the grounded emitter transistor?

In the end I want to make 5 sets of 30 LED's bright and have each set light up one at a time in sequence and have the option to shut the whole thing off without manually disconnecting power. 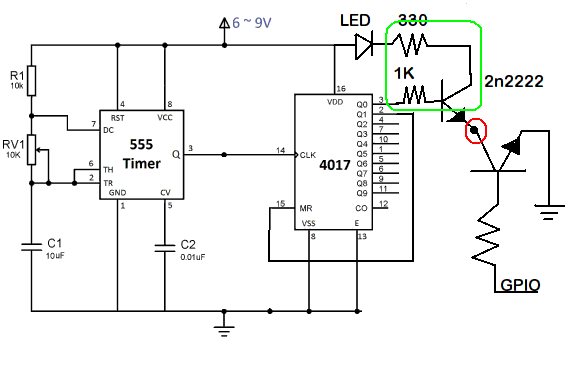 The HCT4017 already has everything you need to turn off the LEDs.

Just interface your MCU to the MR (master reset) line, this will enable you to turn off all the Q(1-9) outputs simultaneously. It does mean that you can't use Q0 of course, since that would be ON when reset.

Since your MCU is going to be less than 6-9V capable you do need to isolate the higher voltage drive. 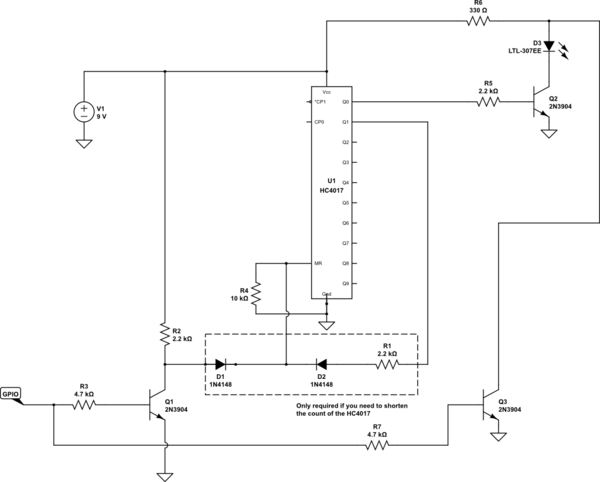 Update: as pointed out not using digit "0" causes a pause in the chaser cycle. I included a fix for this by adding Q3

Not the answer you're looking for? Browse other questions tagged transistors led resistors counter transistor-array or ask your own question.

2
Transistors never work for me
4
Why might the collector-emitter voltage for this transistor be so high?
1
100 LED chaser with multiple LEDs on at the same time
2
High side transistor switch with 9V LED driver
3
Turn off n-p-n BJT on non-zero voltage
0
Using mosfet with barrel jack shunt pin to shut off regulator
0
Switching a 20mA LED with 4mA output of same voltage
0
3 simultaneous led chaser using only 555 and 4017