Capacitor multiplier does not remove ripple

I'm trying to build a capacitor multiplier to remove ripple from a power supply. The power comes from a dc-to-dc converter (MC34063). The actual load is a circuit that has multiple modes of operation and it takes 2mA to 20mA. Fortunately enough, it works from 12V to 26V so I do not need to regulate the voltage to a fixed value. I only need to remove the ripple.

The idea of ripple reduction came from here:

The RC filter is 220k Ohm 10uF with a cutoff frequency of 0.072Hz. C2 is a ceramic cap that has 20V DC offset so probably the real capacity is lower and the cutoff frequency is higher, but it should not matter. The 2N2222 has an absolute minimum hFe=35.

Here is what I have measured: 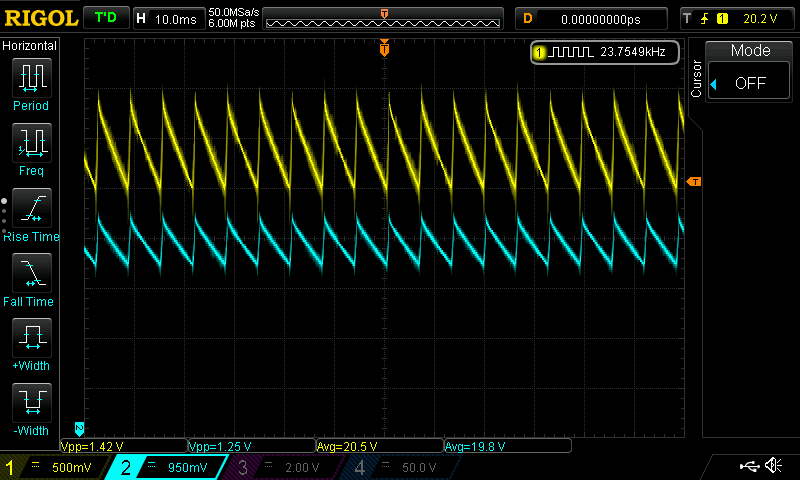 Note: in my original question I zoomed in the time scale too much and I was seeing another ripple that was superimposed on the main signal, this was corrected to the above version.

As far as I understand, the transistor is in common collector configuration, and it inverts and amplifies the error between the actual and the "average" voltage. The above image shows that ripple at Vin and Vout are in phase. There is something fundamentally wrong with my design, I just don't see it. 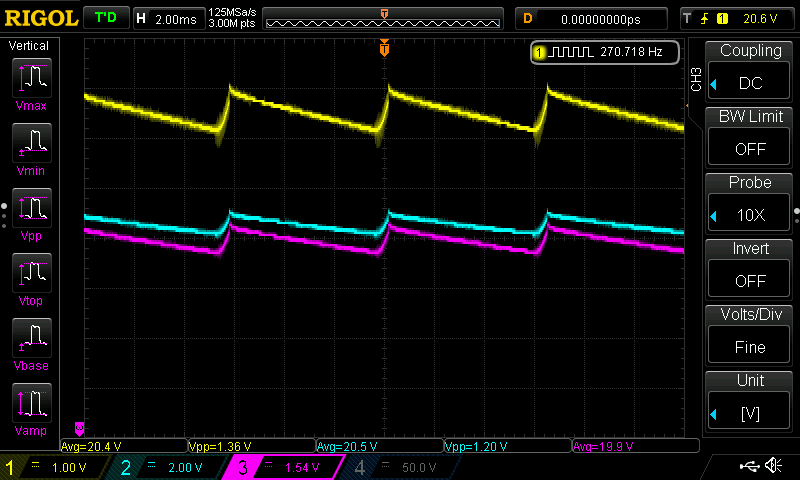 The problem seems to be with the voltage at the transistor's base. It should not have 1.2V ripple. I'm still not sure what is happening here.

UPDATE: first of all, the transistor was faulty, it had a short between the collector and the base. That is why there was a "problem" with the voltage at the base. Replaced the transistor and changed the circuit to use the suggested voltage divider instead of a single resistor. R1 = 47k and R2 = 220k. If I remove the transistor then there is 16.8V at Vbase. 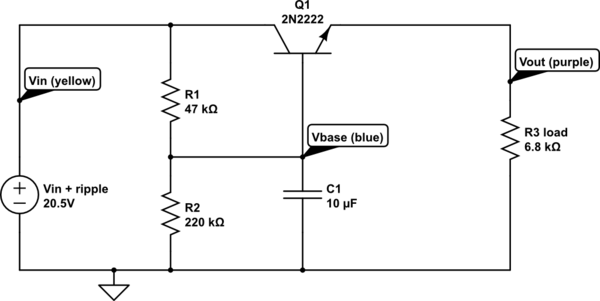 The basic ripple is now reduced from about 2V to 50mV. But a very high frequency oscillation appeared, as glen_geek had foreseen. This circuit is much more complicated than I tought. 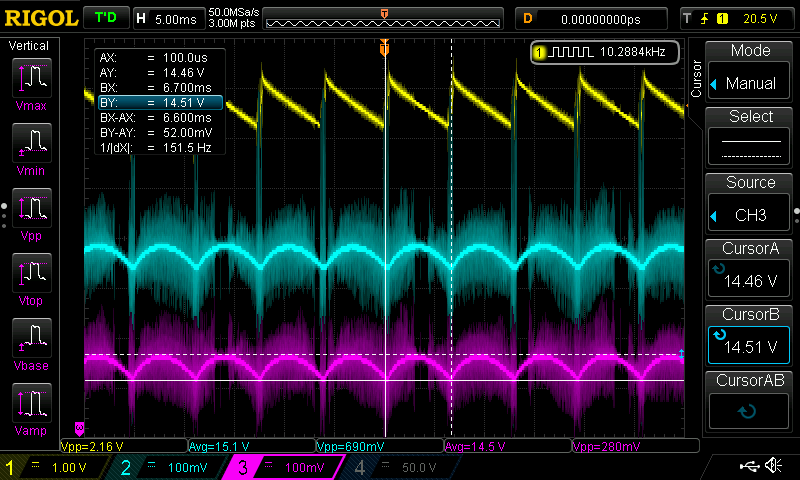 UPDATE - after putting a ferrite bead between the voltage divider and the transistor base, the high frequency noise is still there: 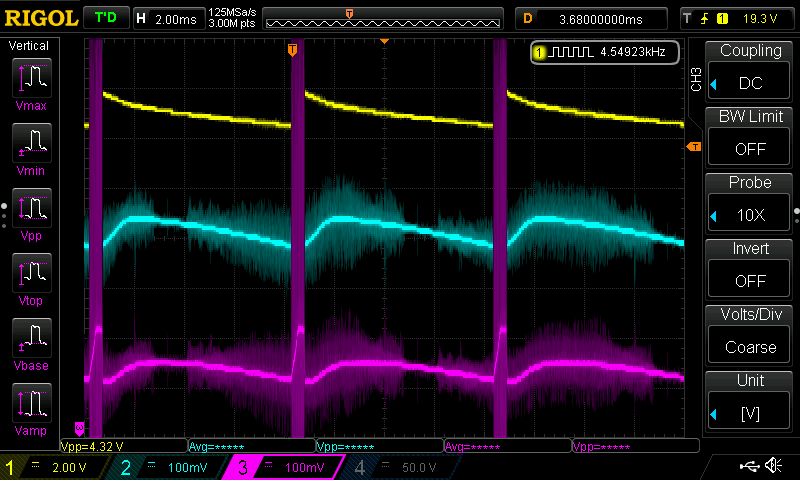 The waveform is changed, it has a bigger spike in it.

The all important component that is missing is in the red box below: -

Taken from the EDN article linked by OP.

You have to have the resistor in the red box to bias the base at a few volts below the incoming supply voltage or it just won't work properly. So if your input supply is 20 volts, arrange for R2 and R1 to provide a DC voltage of about 16 volts at the base. This will means about 15.5 volts at the emitter on light loads and maybe 14 volts on the full load.

The parallel impedance of R1 and R2 should be 220 kohm to acheive the same cut-off as you quoted when C2 is 10 uF.

This should be a comment, but I needed to include a picture: 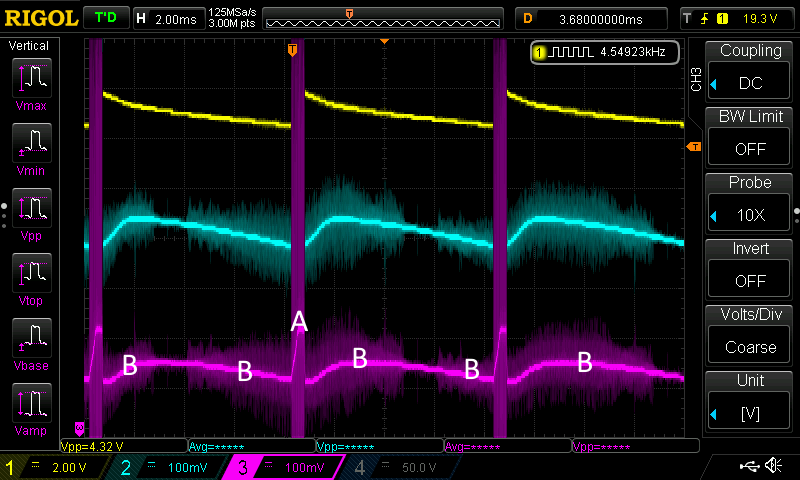 There are two different kinds of noise on the purple trace. Before trying to design a filter to get rid of this noise, it is important to know where the noise comes from, and even more important, you must know if it is indeed real, or if it is an artifact of probing technique, or maybe does not even come from your circuit.

One important hint is whether the noise is synchronized with your DC-DC converter frequency or not.

The "fuzz" I labeled as "B" does not appear to be synchronized with your DC-DC switching. So it could come from the probes picking up random EMI noise from something else in the lab, which can be anything: a phone, a local radio station, CFL or LED lights with switching ballasts, a switching power supply used to power your test setup...

However the big spike labeled "A" is synchronous with your switching, which means it comes from your design...

But there's a catch. The "A" spike occupies most of the screen vertically, so it's quite strong, but it is also wide, which is abnormal. A switching spike looks like a spike, but this looks more like random oscillation caused by the switching spike, as suggested in the comments.

However... there is a probing gotcha here.

The scope is triggered on the yellow channel which has low gain, so triggering could be jittery and inaccurate. If you observe a signal and it appears fuzzy, smeared or having "stretched" edges in the horizontal direction, like your purple trace does, this may come from jittery triggering, especially if the scope is triggered from a different channel which may contain noise. Maybe the trigger level is not set just right, or the signal is noisy, etc. You can trigger from the signal you're actually trying to observe to eliminate this doubt. Considering the height of the noise spike, the scope shouldn't have trouble triggering on it.

So first, set the scope to one-shot mode, and trigger it manually with the TRIG button to record a single trace. Or use the RECORD function to record several traces. Then examine each trace individually. This will disable the "intensity grating" feature, and all the fuzz will disappear. You will simply see a trace. Use a faster horizontal sweep rate to make sure the spike labeled "A" occupies half the width of screen to get good temporal resolution.

Then you will be able to see if it looks like dampened oscillation.

There are other possible explanations. Just because something appears as fuzz on screen does not mean it is a frequency too high to appear clearly. It can be noise from something else (like a CFL bulb) that is not synchronized with your scope triggering on the DC-DC, so it looks like a mess. You will see the difference by watching the trace in single-shot.

Try switching off the lights in the lab, running the device from another supply or a battery, also carloc's advice from the comments (only connect the GND from the supply to check for common mode noise)... basically try several combinations.

If you can observe the noise while your circuit isn't powered, then it is not guilty.

Not the answer you're looking for? Browse other questions tagged ripple or ask your own question.