In the recent Con-Ed transformer “fire”, what exactly produced the color of the huge blue glow over New York City?

In a huge transformer "fire" event like this, what causes this blue light? Is it related to chemicals contained in the transformers the way chemicals affect the color of fireworks or how carbon molecules make many comets blue/green? Or is this really coming from huge electrical discharges through the air and certain spectral lines excited in nitrogen or oxygen compounds? What exactly makes this blue?

BETTER video and audio, stars out variable yellow/orange but after about 1 minutue settles down to beautiful, calming, stable turquoise flames! https://www.youtube.com/watch?v=sr7QkttzX-Q 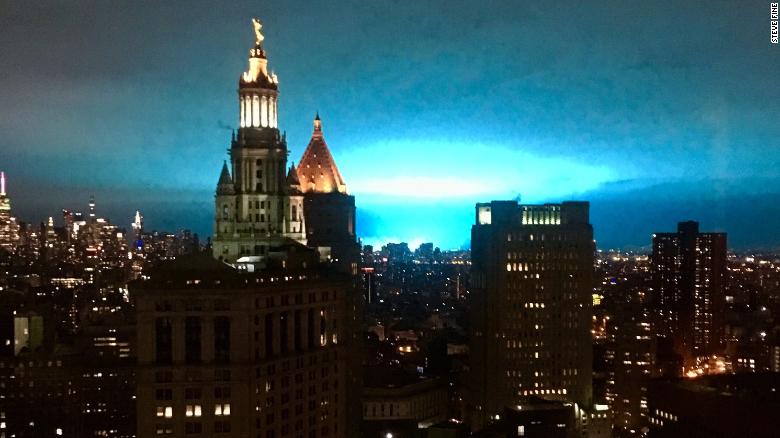 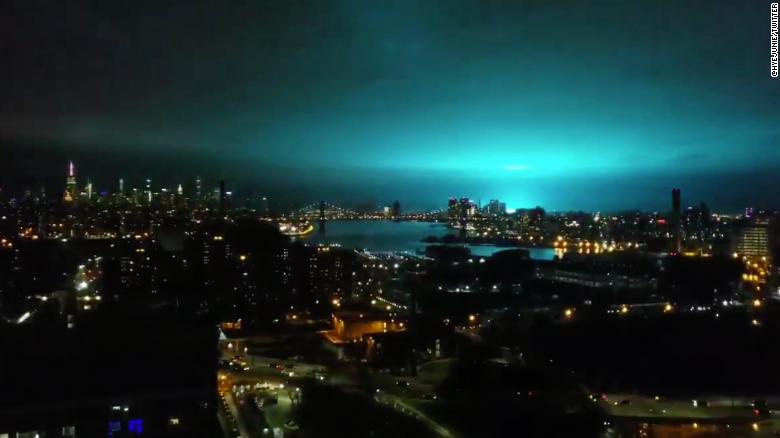 Note well that with the common "Jacob's Ladder" physics demonstration using a neon sign transformer, the flame-arc that crawls between the iron wires is white. Look at youtube videos of electric company arc-streamers during high-kilovolt line open. White. WHY WASN'T IT BLUE?!! The thermal continuum spectrum apparently dominates the line-emission of air glow-discharge. But this isn't always the case. Compare the venerable low-pressure sodium-arc lighting (bridge lights in SF Ca) with common high-pressure sodium arc streetlights.)

I came up with an interesting variant on Jacob's Ladder.

Make up some clingy gel with saltwater and white glue. Also try a bit of copper sulfate solution and glue, strontium nitrate and glue, or any other metal-salts fireworks colorants. Dot them in sequence along one of the iron wires of a Jacob's ladder (perhaps with large empty gaps between.) If you don't mention this to your audience, it becomes physics-magic trickery. When operated, when it hits the sodium chloride, the flame turns brilliant yellow. Totally expected, right? It hits the copper and lights up blue-green. The strontium gives brilliant magenta. Electrode contamination determines visible arc color.

During windstorms in Seattle, the horizon is lit by stuttering white glows. Those are downed power lines, or more likely just lines swinging together. White, not blue. But occasionally there is an extremely brilliant blue glow across the sky, sometimes for many seconds. Ah, that must be copper ions in the mix. Powerlines aren't copper, right? Aluminum iirc, or perhaps steel core with anti-rust alloy coat? To get the blue, the arc has to play across bare transformer windings, or leap between massive copper bussbars in a substation.

But shouldn't it be blue-green? Huh. I should look at the jacobs ladder again. Try some copper wire rather than the classic iron coathangers-with-paint-scraped-off. Maybe the blue is from line-widening at incandescent temperature? Or maybe vapor from copper metal gives different color than various copper salts?

PS, also try Jacobs Ladder with wires spiralled like DNA. Or do Gary Hawkins' version, with fine bare wire 20ft tall attached to the ceiling. At a distance the wire is invisible, so a mysterious flame is apparently rising unsupported through the air. I built one JL with one segmented conductor, and NE-2 bulbs between the segments. As the arc rose up, it lit the NE-2s in sequence, like a bar-graph display. Think of more! Nobody ever tries mutating the JL classroom HV demonstration. It's your excuse to futz with dangerous power-arcs. How about a long glass rod with a paper tuft soaked with metal salts, poked very briefly into JL arc by hand? Or, salt mist-spray coming from a distance. How long does the arc remain colored? Quite long time constant.

Ionized nitrogen and oxygen in the air emit light in the blue and UV.

Here's a link to a web site showing the spectra of a lightning flash (in air), showing the characteristic emission spectra of nitrogen at 500.5 nm (blue), and 568 nm (green). http://www.atoptics.co.uk/fz655.htm 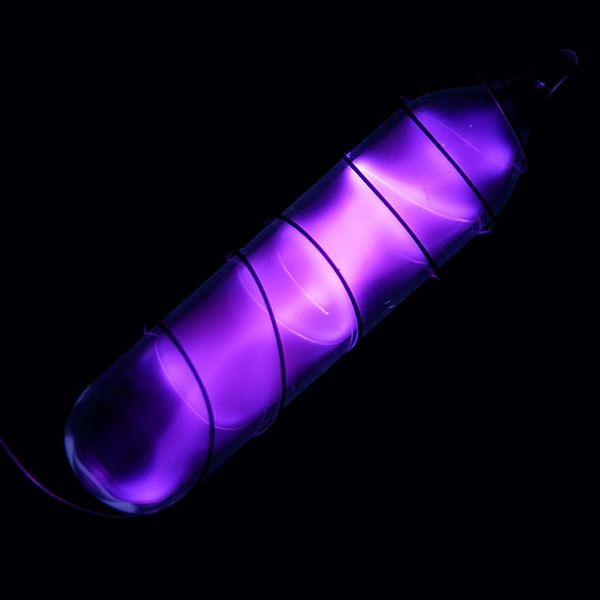 I agree with @wbeaty's answer and @Passerby's comment that it's probably related to the presence of copper vapor in the flames, though it could still be molecular carbon (C\$_2\$) from transformer oil.

The pure bright turquoise color of the "flame" is quite steady and stable while the arcing sound is heard in the videos, then instantly disappears as soon as arcing sound stops, suggesting this is an arc, not a real flame. Nonetheless there are excited atoms and they emit light.

Copper has several strong emission lines in the blue and green and the resulting color depends a bit on the chemical state. 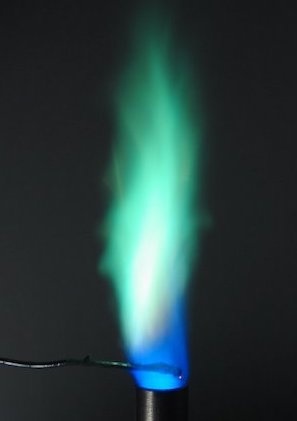 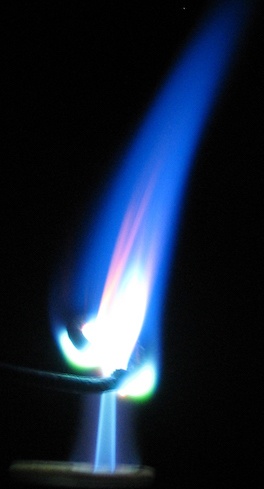 Copper vapor lasers seem to be a nice color match as well, and don't require the salt form: 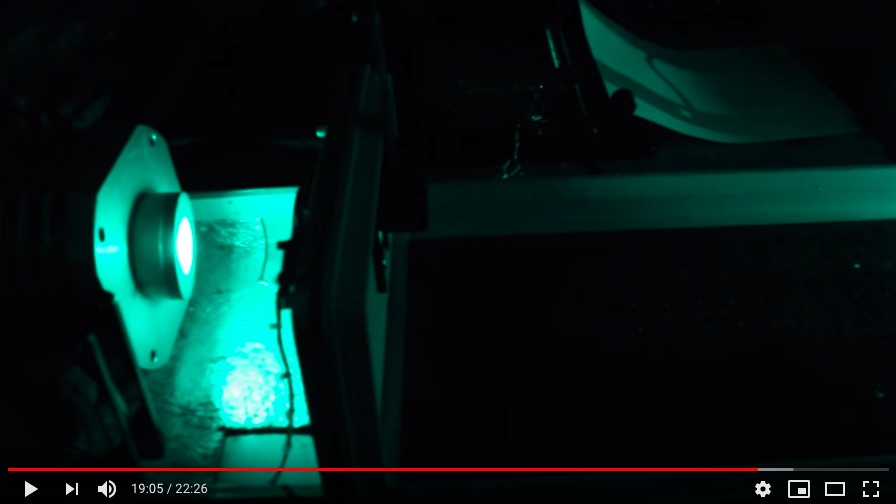 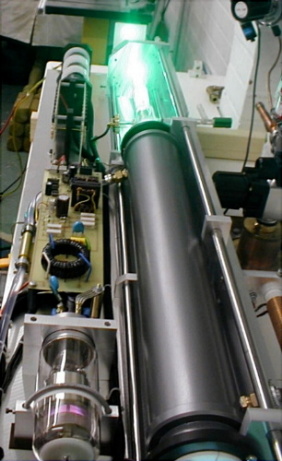 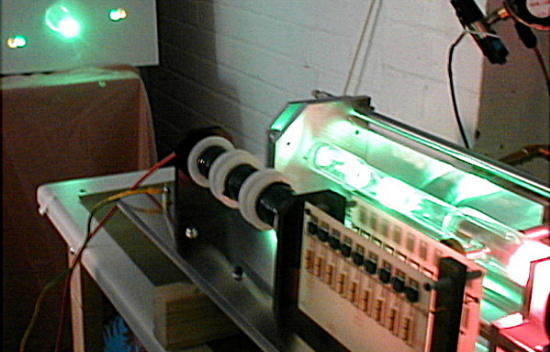 Just a bunsen burner makes blue/green light as well, This may be C2 or CN molecules: 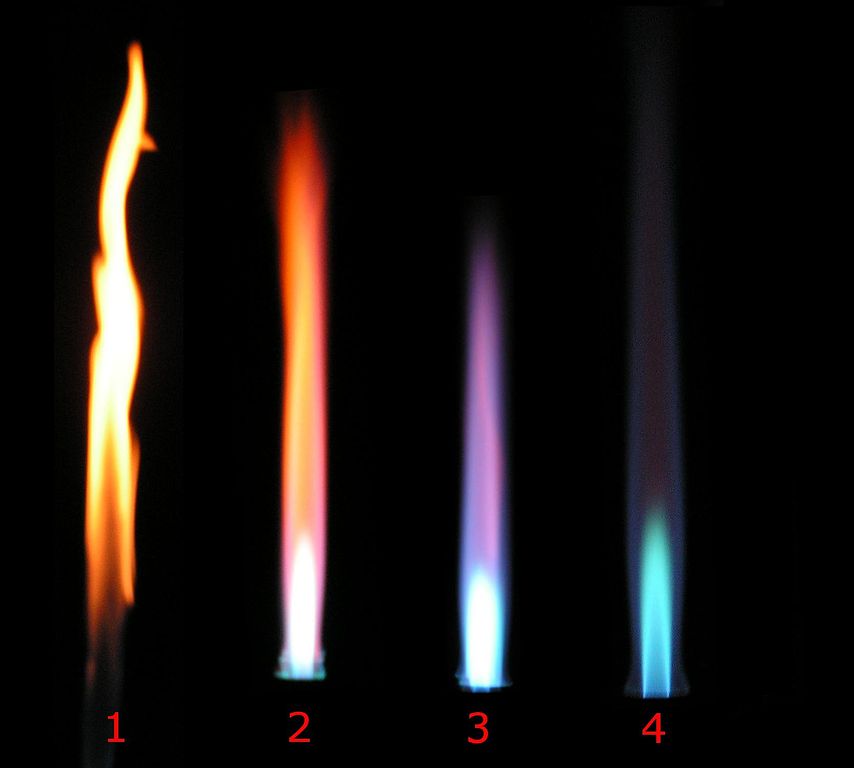 below: Vibronic spectroscopy From Spectrum_of_blue_flame 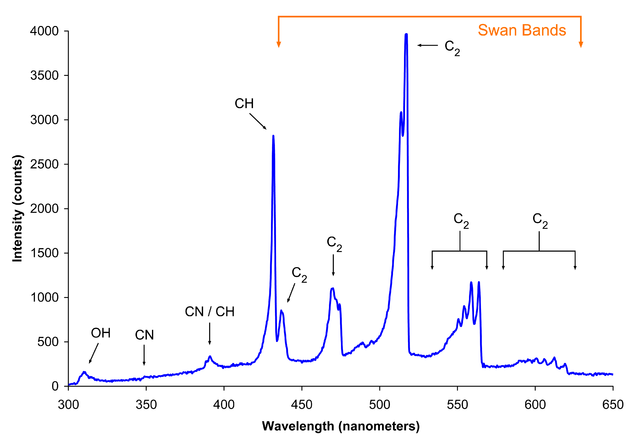 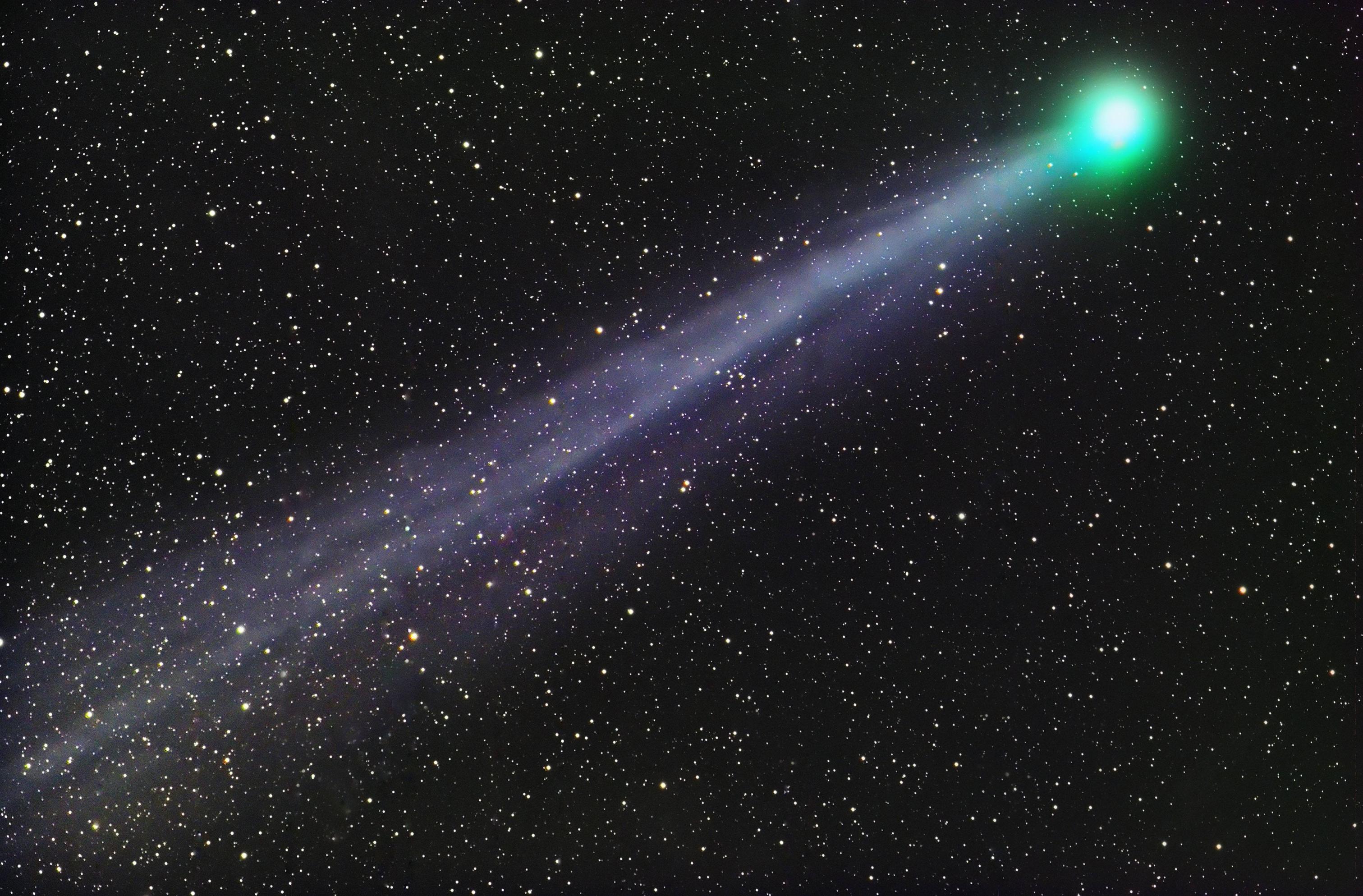 Not the answer you're looking for? Browse other questions tagged transformer discharge spark arc or ask your own question.