How to measure small AC mains currents from a microcontroller?

I'd like to build a battery charger control circuit using an Arudino, a relay module, and a current sensor.

I'd use the relay to turn on AC power to a "smart charger" for one or more sets of lithium cells in bike headlights (and other types of battery chargers too. This is just a typical use-case). One of the headlights will draw as much as 2 amps at 5 volts. I suspect the other one only draws 500 mA, or perhaps 1A.

I want to sense the current being drawn by the charger(s), and detect when they switch off and their 5V current use drops from 500-2500 mA to the trivial amount of power used energize the power supply and drive their display LEDs (probably <50 mA at 5V.)

I COULD cut the USB charging cable and put my current sensor on the low voltage side, but I'd like to make this a versatile charger controller that I could hook to just about any smart mains-powered battery charger by just plugging the charger's AC power cable into my controller. (And possibly adjusting the threshold current, although I'm hoping to make it smart enough to measure a baseline charging current and detect the drop in current when charging completes.)

What could I use to measure the AC current and feed that information into the Arduino? Ideally a digital signal would be best. A variable input voltage driven by current would be my second choice, and a logic 1 that drops to a logic zero when the current drops below a set threshold would be my third choice.

I'm interested in either an off-the-shelf current sensing module, or something I can build.

If this is a more appropriate question for the Arduino Stack Exchange, I apologize. It seems like a decent fit for this site.

I've built a home-brew passive current sensor myself before that lets me switch my shop-vac on and off when I turn on my drill press or other power tool. I wound bell wire around a ferrous rod (a nail, if memory serves) and then wound the load wires from the drill press around that, creating a crude transformer. I fed the output of that into a full-wave rectifier diode I had lying around, and attached the positive output from the rectifier to an electrolytic capacitor, and tied both negatives to ground. Then I connected the positive lead of the capacitor to the positive input of a solid state relay. Finally, I ran the mains power into through the load side of the solid state relay. When I draw enough current through the power tool load, it generates a stiff enough output to raise the voltage out of the capacitor enough to turn on the solid state relay. However, this rig only detects several amps of current. I want something much more sensitive.

I'm expecting to need to use active components here. I might be able to build an analog circuit using an op-amp, but my electronics knowledge is a bit weak (I'm a software guy) so I would struggle to figure out to configure it. I seem to remember that the ratio of a resistor on the input and a "feedback" resistor lets you adjust the sensitivity of an op-amp circuit, but I'd have to do some serious digging to figure out what type of op-amp to use and what resistor values would be appropriate. I guess I could use a properly sized potentiometer to adjust the current threshold, but again, my preference would be a way to convert the current measurement to digital information that I could then handle through software on the microcontroller.

This circuit will amplify most anything 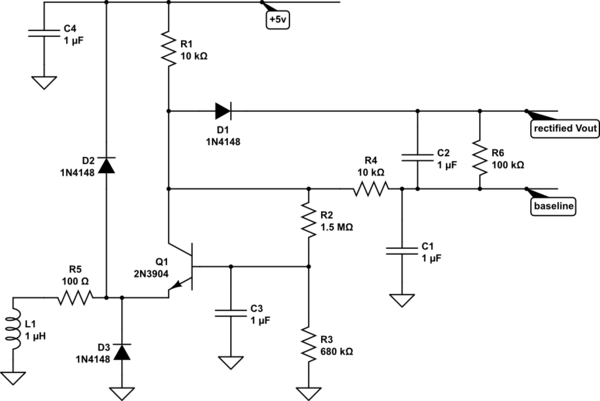 The D1 rectified the amplified input, with some deadband (several hundred milliVolts, if not more).

Not the answer you're looking for? Browse other questions tagged microcontroller current-measurement or ask your own question.

9
Transistors: why are resistors needed?
5
From a power consumption point of view, which should I use: SSR or Relay?
1
Fix the Problem for Shunt Resistor due to Temperature & Current Sensor
0
How to choose a relay for controlling a freezer/fridge with a uC?
0
Voltage drop affects sensor reading
0
Powering microcontroller from 24V lines with variable duty cycles?
9
How to Measure Power Consumption on Extremely Low Power Devices?
13
How to measure small, spiky amounts of current?
2
Measuring small currents at DC high voltages without floating meter